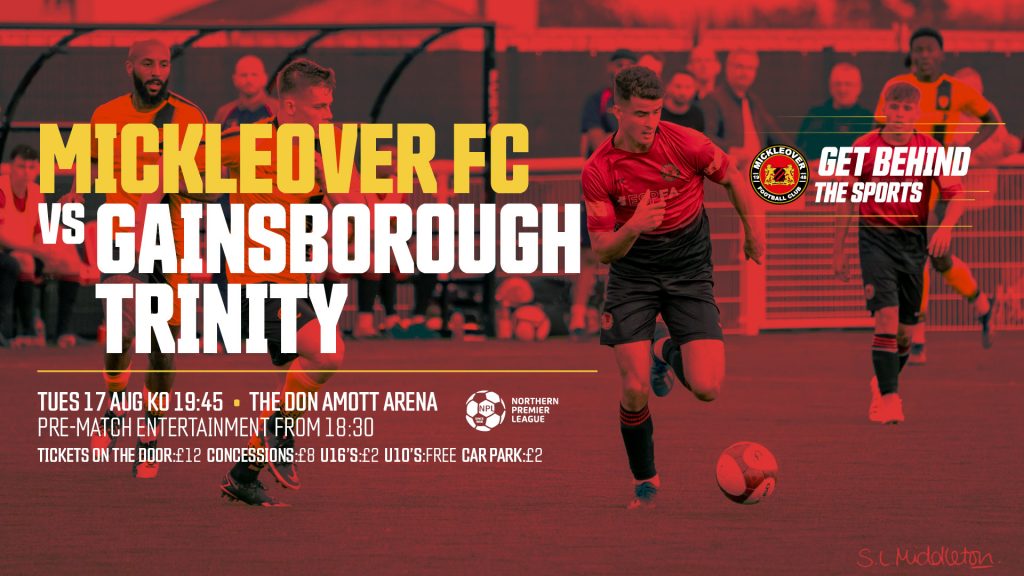 Tuesday night’s visitors began their NPL season with a 1-1 draw at home against Witton Albion last Saturday. Trinity have had a tough couple of years and could easily have been relegated if the seasons had run their course.

A new youthful squad will be hoping to progress this season with a many out to impress early on.

Goalkeeper Matt Yates has recently been released by Derby County and after loan spells at Gloucester, Hereford and Telford, joined Gainsborough this summer.

Lewis Carr is an experienced defender just signed from Basford, but he’s played at Grantham too. He will be hoping to partner Irish Under 19 international Left back Cieron Keane, who had League One experience during his graduation at Notts County.

After leaving the Magpies he has played for Nuneaton, Worcester, Kidderminster, Alfreton, Boston Utd and Leamington and was at Basford last season.

Charlie Jemson, son of Forest legend Nigel, is another central defender just signed from Worksop. He had a spell on Forest’s books and also played for Ilkeston, Tamworth and Peterborough Sports.

Derby County’s Academy was the starting point for central defender Callum Minkles, while wing back Joe Wilson started out at Reading. He is a new signing from Ilkeston, but has played for Hayes & Yeading and Fleet Town too.

Midfielder Kyle Dixon has just come in from Basford, but is another former Notts County graduate. He made one League One appearance for Notts, before loans at Grantham, Boston and Telford. He had a couple of seasons each at North Ferriby and Newark Flowserve, before spending last season at Basford.

Experience in coaching and playing make Neal Bishop a valuable member of the Gainsborough squad. A former Middlesbrough Academy player, he made his league debut for Barnet in League two. The reliable midfielder had already played at Billingham, Spennymoor, Whitby, Scarborough and York, before making 95 appearances for Barnet.

168 games at Notts County and a spell with Blackpool in the Premiership followed, before another four years at Scunthorpe. His league career ended at Mansfield and he was at Scarborough last season, before joining Gainsborough as player coach.

Midfielder Alex Wollerton is another summer singing. The ex Manchester Utd and Leeds junior also had a spell at the Barnsley Academy, before joining York City last September.

Gianluca Bucci is an ex Lincoln City Junior who is at home in defence or midfield. He has played at Spalding too, but has returned to Gainsborough after a spell at Frickley.

Recently released by Grimsby Town, midfielder Jock Curran is keen to impress. He started at Doncaster Rovers and has also played at Spalding and Lincoln Utd.

George Hornshaw made 12 first team appearances for Scunthorpe last season. He joined the Irons back in 2011 aged 12, making his first team in 2017. He had a loan spell at Farsley and came to Gainsborough initially in 2019, before joining permanently in July this year. He plays full back of midfield.

Ex QPR and Fulham winger Toby Gould and former Chester Junior Jack Gibson will be looking to start up front, the latter coming in from Carlton in May this year.

Another new signing is Curtis Morrison, back at Gainsborough for a third time but this time its permanent for the former Chesterfield midfielder. He made two first team appearances at Chesterfield and was also loaned to Matlock before joining Guiseley and also played at Matlock and Hednesford.

Striker Ben Morris started at Derby County, before coming to Gainsborough via Bedworth, Matlock and Ilkeston and finally Portuguese striker Joao Antonio Soares Rangel as been brought in from Portuguese club Nogueirense, having sampled the UK scene with Norwich, Barnsley and Mansfield.