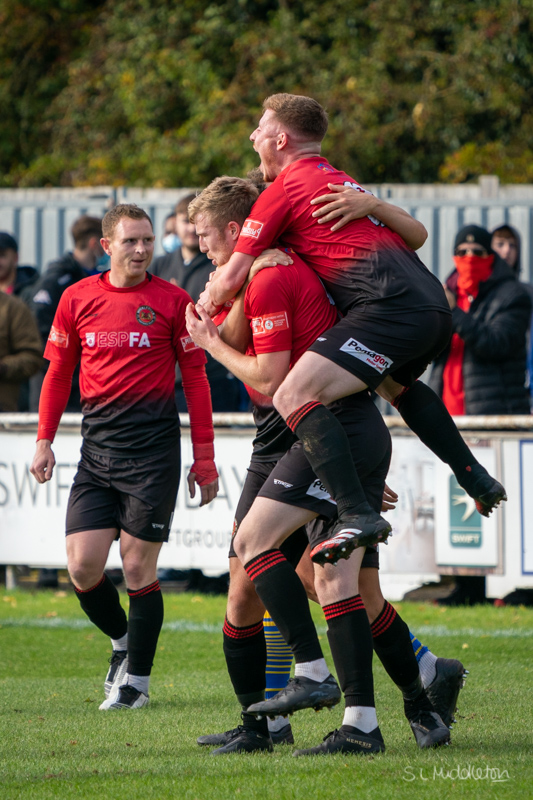 After a cautious start, four second half goals secured Mickleover’s place in the First Round draw of the FA Trophy.

The game had barely kicked off when Mickleover got off to flying start. A great through ball split the visitors defence wide open, leaving Webb with a shot just inside the box, which he buried in the bottom right hand corner, opening the scoring after three minutes 1-0.

There was almost a second for Mickleover after 12 minutes to, before the attacking stepped back a pace and Dereham began to settle.

But 20 minutes in and there was another chance, when Bennett put another dangerous ball into the box, but a Dereham defender managed to intercept before Webb was able to collect.

Webb’s pace continued to cause problems and he just missed out again in a one on one with Elliot Pride in the Dereham goal.

After a 10 minute lull in the pace, Webb was in again, shooting from inside the box, his effort was just wide of the right hand corner.

Three minutes later a Morris cross was deflected in the box, just out of Webb’s reach.

Dereham had the ball in the net just before half time, but was ruled out. Slinn had saved initially, but the ball ran into Toby Hilliard’s path in an offside position.

So half time 1-0, Mickleover had been in charge throughout, but could have more than one.

Wright was an early second half sub coming on for Agustien, before Rhys Logan had a run on goal for Dereham after 51 minutes but couldn’t finish.

Beavon was next to try his luck, with a 55th minute half volley well over. But as Mickleover stepped up another gear, Wright lofted the ball to Webb and with just the keeper to beat, the striker placed it home from close range 2-0 after 57 mins.

Wright’s runs from midfield continued to cause havoc for the Dereham defence, and his cross into the box on the hour found Beavon at the far post, who despatched it into the roof of the net 3-0!

Back from injury Gowing came on for Milner and the Mickleover push continued. Webb had a chance of a hattrick when he fired the ball over from a tightening angle, but five minutes later Pride failed to deal with a low cross, leaving the ball at Beavon’s feet for an easy tap in the 77th minute 4-0.

With Webb and Beavon both scoring two each, Beavon went off and Satchwell came on for the last nine minutes.

The teenage striker rewarded with his first senior goal on the 90 minute mark, after receiving from a corner.

It’s now back to NPL action at Nantwich on Tuesday, with one eye on the FA Trophy draw too, but all dependant on any decision over the lockdown restrictions.