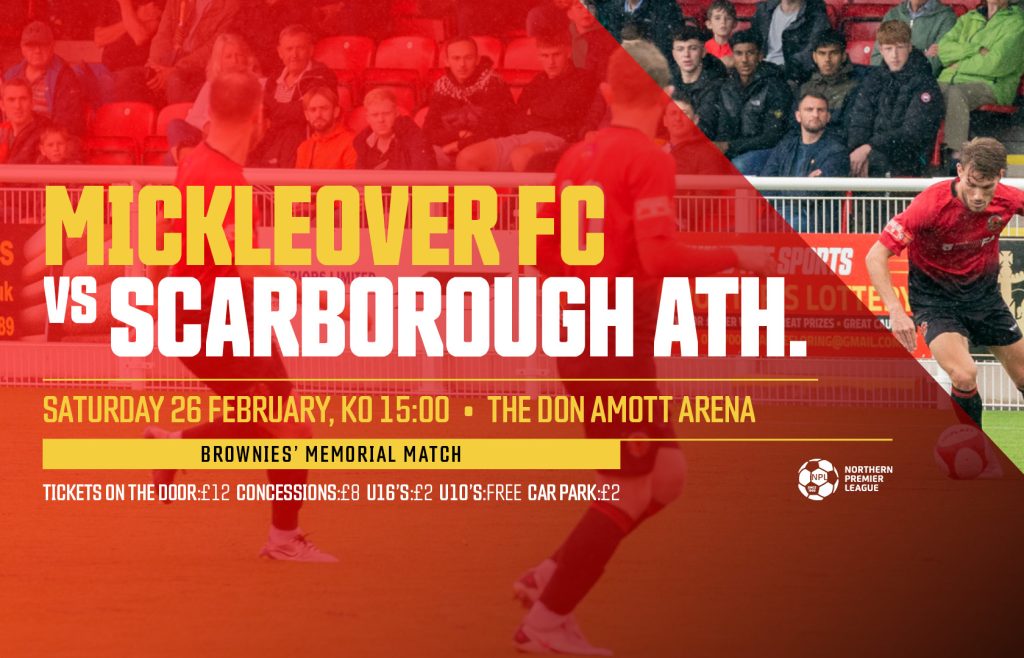 Scarborough Athletic are the visitors to the Don Amott Arena on Saturday, currently fourth in the NPL, having won eight of their 16 away matches so far this season.

They were one of the few teams to get a game last weekend, drawing 2-2 away to FC United and on a 10 game unbeaten run since their 0-1 defeat at South Shields on New Years day.

But following our sensational victory last time out against table toppers South Shields, hopes will be high of making it six consecutive victories.

Ryan Whitley is the first choice goalkeeper, on an extended loan rom York City. He has also had spells at Whitby and South Shields.

Assistant manager Michael Ingham is usually the number two keeper. A Northern Ireland International at both full and under 18 and  23 levels, he had six years at Sunderland, after they signed him from Cliftonville. His numerous loans included Carlisle, Coleraine, Stoke City, Stockport, Darlington, York City, Wrexham and Doncaster.

He went to Hereford following his release from Sunderland and has been at York and Tadcaster until moving to Scarborough this summer, with a host of league experience behind him.

Central Defender Bailey Gooda has returned to Scarborough after a spell at Hyde last season. He has also played at Frickley and Harrogate too and started this season at Matlock Town. He is an ex Barnsley Junior.

Left back or midfielder Ashley Jackson came to our hosts in August 2020, from Boston Utd, where he spent two years after joining them from Ossett Town.

Dylan Cogill can play centre or left back. The ex Huddersfield Academy player  had a loan spell at Clyde, before joining then permanently after his release by the Terriers. After a year in Scotland he joined Farsley Celtic, from where he joined the Sea Dogs last summer.

Will Thornton is another centre back who was signed from Guiseley, after they had sent him out on loan to Gainsborough Trinity. Similarly Kieran Weledji came to the club around the same time, after five years at Whitby. He came out of the Middlesbrough youth scheme.

Simon Heslop is a vastly experienced midfielder. He started out at Barnsley, making one first team appearance, but had loans at Kidderminster, Tamworth, Northwich, Halifax, Grimsby, Kettering and Luton.

He then made a permanent move to League two Oxford, making 102 appearances and scoring nine goals over three seasons. His next moves were League One Stevenage and League Two Mansfield, spending a season at each, making another 65 league appearances, before stepping into the National League with Torquay, Wrexham and York.

After a loan at Eastleigh he went to Boston Utd and came to Scarborough from Blyth Spartans last  summer.

Ryan Watson is another experienced midfielder, who started his career at Huddersfield and made the first team on three occasions. He joined Bradford PA for 2010/11, but soon moved on to Farsley Celtic, where he spent two seasons.

Next stop Curzon Ashton, but after four seasons he returned to Farsley, from where Scarborough signed him for the 2018/19 season.

Central or defensive midfielder, Kieran Glynn came to the Sea Dogs in July last year after an initial loan from Salford City. He started out with FC United before joining Salford in 2018. Loans at Chorley, Woking and Southport preceded his move to Scarborough.

Northern Ireland under 21 midfielder Lewis Maloney was a new signing last summer. He came through Middlesbrough’s Academy, before joining Gateshead on his release. He came to Scarborough after two years at Marske Utd.

James Cadman is an ex Mickleover midfielder. He started at the Rotherham Academy, before moving on to Stalybridge, Harrogate and Hyde. He came to Mickleover in June 2019 from Scarborough, before making his return a year later.

Striker Nick Hutton has previously been at Harrogate Town, but impressed manager Jonathan Greening in pre-season and his stay has become permanent.

Striker and coach Ryan Blott is the clubs record goal scorer having left for Pickering Town in 2017 with 250 goals under his belt. He returned to the club in January last year, initially as a junior coach.

Jake Day  rejoined the club in October, after spending last season at Alfreton Town. He joined the Reds from Tadcaster in August 2020 and was at Scarborough in 2017 on a dual registration with Bridlington Town.

Cameron Wilson is an attacking midfielder on loan from Scunthorpe, a product of the Irons own Academy.

Michael Coulson is an experienced striker who started his career at Scarborough and played 47 games in the Conference National League, before joining Championship side Barnsley. After 25 games and two goals, plus loans at Northwich and Grimsby, his stay at Grimsby became permanent, with 114 appearances and 24 goals before moving on again.

Four years at League One York City, preceded a short stay in the Scottish Premiership with St Johnstone, arriving back at Scarborough in July 2017. He has scored in both of their last two league games. He is also an England C International.

Winger or attacking midfielder Luca Colville is another player to have ventured over the border. The former Huddersfield Junior had two years at Morton, before coming to Scarborough last October.