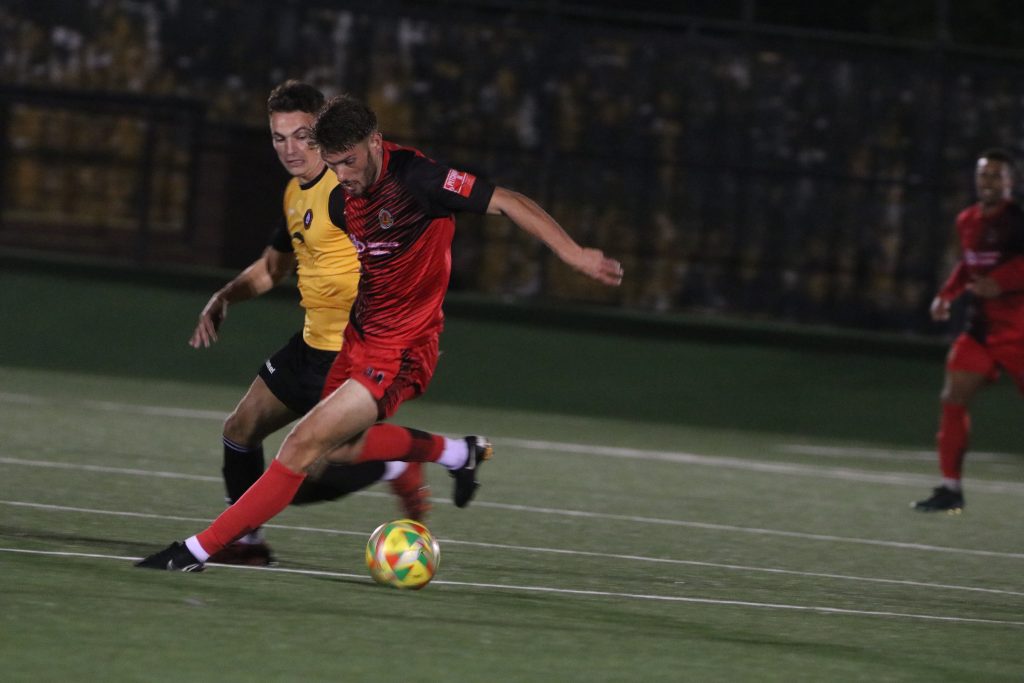 Mickleover made it three successive Southern League Premier wins, after a 3-1 victory on their trip to Rushall Olympic last night.

From the starting whistle Mickleover were on the attack and earned their first corner after four minutes, after Dales’ initial cross was put out.

Only a minute later Davidson-Miller had his first shot of the night blocked after another Dales cross.

Not surprisingly it was Dales causing problems for the home defence that brought the opening goal. As the winger cut in from the left he let fly with a cracking shot from a tightening angle beating keeper Weaver on his far post, even though he got a hand to it. 1-0.

Dolan put a dangerous cross in from the left a few minutes later, but the keeper held it, before Rushall had their first real attack 14 minutes in, following a corner.

Dales broke through again and was tripped on the edge of the box, but no foul given, while only a couple of minutes later it was 2-0 to Mickleover when Davidson-Miller battled through to find Warren, who fired it home after 16 minutes.

Rushall earned a free kick but Bateman easily cleared the danger, just before Rushall had their first real shot after 18 minutes.

There were a couple of free kicks given but our hosts failed to threaten from any and after 25 minutes Warren went close again, just wide of the right-hand post from long range, with another powerful drive.

As Dales had before, Dolan had a long run and was tripped on the edge of the box, but no foul, but Mickleover continued to threaten the home defence, with the occasional break their only respite.

Dales and Warren were playing their usual roaming roles, as Wilson and Bateman played more defensive midfield, and after 33 minutes Dales put a long ball through just out of Davidson-Miller’s reach.

Beavon had a cracking shot just over the bar after 35 minutes, before Rushall managed to break out of the own half and finish the first half strongly.

The hosts had a few more random and wide shots and Wilson cleared a more telling cross, before Hedge had to make his first save of the night with two minutes left.

Milner came on as sub to replace Wilson who had a heavy cold, but in time added on a nice interaction between Davidson-Miller and Beavon, saw the former’s final shot of the half blocked again.

Just as in the first half Mickleover came out with all guns blazing again, but after 49 minutes Hedge had to punch away a good Rushall effort on his right.

There was a whole series of corners for our hosts before it was finally cleared, but after another tremendous run down the left from Dolan, he squared the ball for Beavon, a quick turn and shot and it was 3-0.

For the next 15 minutes it was fairly even, before a more sustained period of attacking was triggered from a long throw, but ended with a blocked shot.

Rushall made a triple substitution, but a mistake by Whittall at the other end almost sent Davidson-Miller clear, before he fouled the Mickleover striker and then appealed for his own free kick, neither of which were given.

After a fairly quiet but solid comeback game, Bennett was replaced by Mann for the last 14 minutes, as Butler and Watt had to earn their crust with more home attacking.

A Mantom effort was cleared off the line, but after 80 minutes Whittall pulled one back for Rushall 3-1.

Mickleover were on the retreat but holding firm, Dales made way for Marshall into the last five minutes and Beavon had a shot blocked from a Warren corner.

Although Rushall hadn’t played badly, the game was won and lost in midfield, where Mickleover’s strength seemed to lie.

We are now up to ninth in the table and only a point outside the play-offs, but it’s now over a week until the next game, when we visit 11th place Needham Market on the 24th.