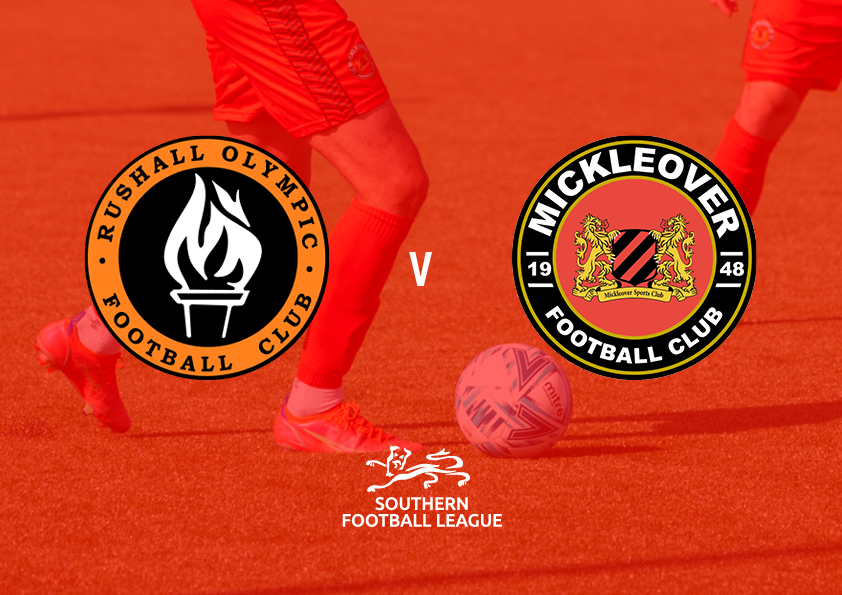 Following last Saturday’s postponements, tomorrow evening it’s a short trip down the A38 for Mickleover FC as we visit Rushall Olympic.

Manager Liam McDonald has been in charge for five years, having previously managed Solihull Moors and Hednesford, after ending his playing career as a player coach with Redditch.

The season started badly with a 0-3 home defeat against Coalville and after drawing 0-0 at Hitchin, they got their first goal in a 1-3 defeat at Tamworth.

Wins at home to Bromsgrove and away to Needham Market, were followed by another draw, 1-1 at home to Barwell.

But like Mickleover their FA Cup hopes fell at the first hurdle, going down 1-4 at home to Redditch. They have an identical record to ours, but are one place ahead in the table in 13th.

Goalkeeper Jake Weaver has been receiving excellent reviews this season. A former Birmingham City youth player, he was loaned to Hungerford, Kidderminster, Hednesford and Leamington, before a permanent move to Leamington in August 2020. He arrived at Rushall pre-season and is one of four ever-present players in the team.

Right back Kristian Green came from Stourbridge in July last year, having also played for Halesowen, Solihull Moors and Tamworth.

Sam Whittall is one of the long serving players. A midfielder, he started out as a Wolves Junior, before joining Cambridge Utd. He came to Rushall in July 2016 from Brackley.

Former England Under 17 International Sam Mantom is the leading scorer this season with three. Having started at Walsall, he spent most of his youth career at West Bromwich Albion, and was loaned out to Haukar in Iceland, Tranmere, Oldham and Walsall, before joining the Saddlers permanently in 2013, where he later became captain. He then moved on to Scunthorpe and Southend, before arriving at Rushall in October 2020, with over 250 league and FA Cup starts under his belt.

After only a month he moved to Hemel, before rejoining our hosts again in pre-season.

Left back Reece Mitchell came from Boldmere St Michaels in July 2019, having come through the youth team at Leamington.

Former Stoke City youngster Tom Thorley is an experienced midfielder. He was loaned to Stafford Rangers and Burscough, before a permanent move to Stafford in 2009.

He had three years at Worcester City and five at Hednesford, before returning to Stafford in 2018. He joined Rushall in October 2020.

Keith Lowe is a very experienced centre back, having played over 400 league games. Initially a Wolves Academy player, he was loaned to Burnley and QPR where he played in the Championship, before, Swansea, Brighton, Cheltenham and Port Vale, joining Kidderminster on his release in 2008.

After a spell at Hereford he joined Cheltenham Town and has also played for York City, Nuneaton, Macclesfield and Bradford PA in between three spells at Kidderminster, from where he joined our host pre-season.

Andre Carvalho-Landell is another striker that arrived last month, scoring his first goal in the win over Needham Market. A former Wolves Junior, he moved to Bath City before joining Rushall in August 2012. After a year he moved to the US with Tiffin Dragons and Michigan Bucks, before returning to our hosts in September 2017.

He then moved on via Alvechurch, Stourbridge and Bromsgrove, before a year at Hednesford preceded his third spell with Rushall.

Midfielder Alex Fletcher is yet another pre-season signing. Starting out as a Shrewsbury Town Junior, he played for Telford and Tividale, before joining Welsh League Newtown. He also played form Southport and Stafford, returning to Newtown in between. He spent a year back at Stafford, before arriving at Rushall.

Midfielder Richard Batchelor is well known to Mickleover, as he was at the Don Amott Arena before joining Rushall in November 2019.

He started at Romulus, moving on to Chasetown, Leamington, Hednesford, Brackley, Worcester, Stafford, Stourbridge and Highgate, before coming to Mickleover from Redditch in July 2019.

Jayden Campbell came Walsall Academy in pre-season. He’s an attacking midfielder and scored his first goal in the home win against Bromsgrove.

Will Shorrock was another product of Walsall’s youth scheme. A midfielder, he went to Bromsgrove after his release in 2018 and came to Rushall pre-season too.

Centre back Jordaan Brown has only made one start this season. He is a former AFC Wimbledon Junior, who then played for Staines, before trying his luck with VPS in Finland and Floy in Norway.

After two years he was back in the UK with Hayes & Yeading, before heading to the Midlands with Redditch, Stafford and Stourbridge. He came to Rushall in March from Tamworth.

Striker Sam Moore was another pre-season capture. A fairly prolific scorer, he started out at Coalville, before moving to Quorn, Shepshed, Birstall, Barrow Town, Eastwood, Coleshill and Corby.

Sports would appreciate your support for the 7.45 kick off, it’s less than an hour away, just 31 miles!