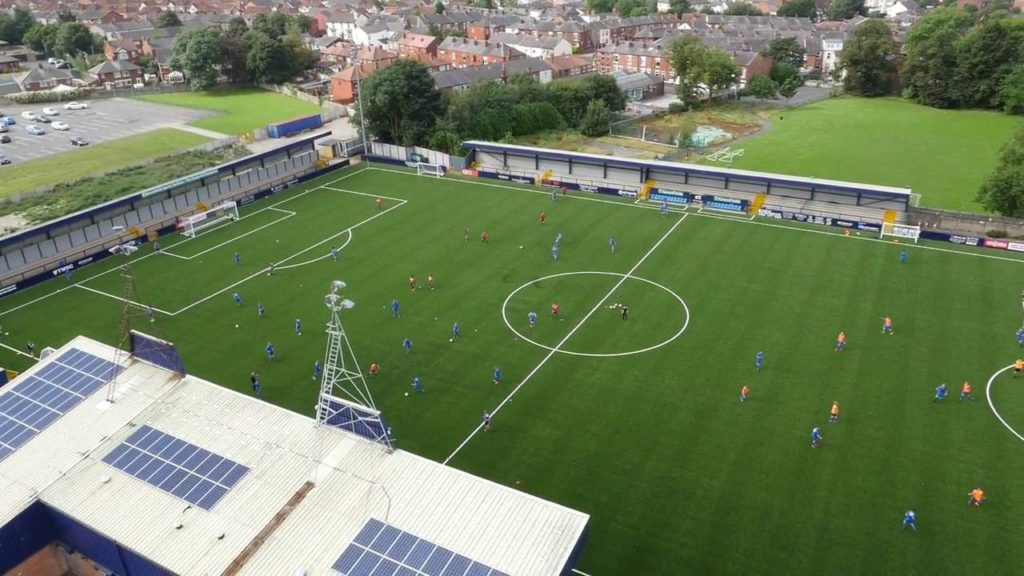 Sports go on the hunt for their first league away win and look to build on Tuesday nights good performance as they travel up to Manchester to take on former National League Premier side Hyde United. The Tigers who a meteoric rise up to the highest level of non league football with the backing of Manchester City using their facilities for their academy and women’s teams. However when City built their new training campus they jumped ship leaving Hyde to fall down to Step 4 after a number of relegations. But they are back on the rise and after gaining promotion last season will be looking to push on and made strides to get back higher up the pyramid again after a tough period in their recent history.

LAST TIME OUT
Hyde United’s last outing was in the Cheshire Senior Cup on Tuesday night as they lost 3-0 away at Birkenhead based side Cammell Laird 1907. Their last league outing came on Saturday as they won 1-0 away at Whitby Town as John McCombe getting the only goal after 15 minutes. Sports however have had a win and a draw going into this game with the 7-1 cup win at Anstey and the 1-1 draw in the league at home to Scarborough Athletic. Isai Marselia the players netting for Sports just before half time.

SPORTS TEAM NEWS
After two substitute appearances in the last week, Pablo Mills has now shaken off his shoulder injury and is back fit. Kevin Grocott is nearing fitness again but might not be quite ready for this game. New signing Ricky Ravenhill will be looking to continue in Midfield after the players signed from Buxton made an solid start to his Sports career at home to Scarborough on Tuesday night.

GOING TO THE GAME?
The game is taking place at Hyde United’s Ewen Fields Stadium, Walker Lane, Miles Street, Hyde, SK14 5PL. Admission for the game is £8 for Adults £5 for Over 65’s and £3 for Under 16’s. It is then a further £1 for each category to sit down in the seating stand of the ground. Match day Programmes and hot and cold food will as always be available as well as alcoholic drinks being served in the club house before, during and after the game. Sports are offerings travelling fans limited seats on the players coach leaving the Don Amott Arena at 11:45am at £12 a seat. For more information and to book a seat contact secretary Tony Shaw on 07966 197 246.