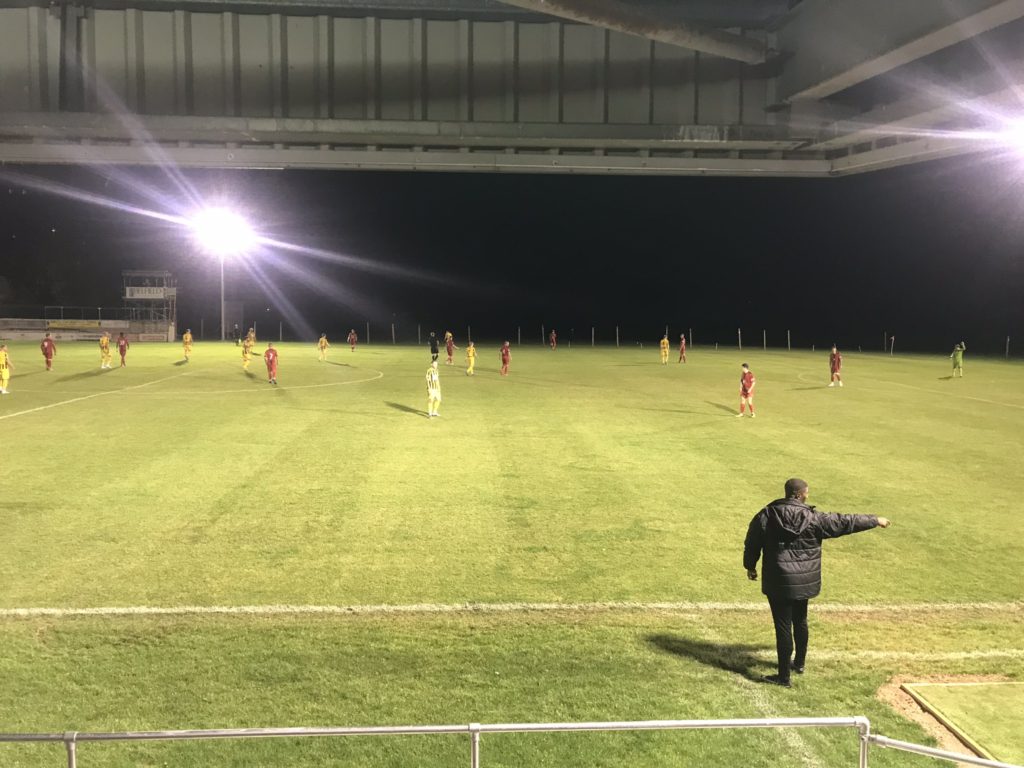 It was honours even at The Don Amott Arena on Tuesday night as Scarborough Athletic were the visitors as Sports draw 1-1 with the Sea Dogs. Two goals either side of the half time break from Isai Marselia and Scarborough’s James Walshaw meant the points were shared but as much as a draw against one of the toughest teams in the league is a positive step, Sports will rule not taking more of their chances particularly in a dominant first half performance.

Sports lined up with Lewis King in goal and a back four of Jake Scott, Tom Burgin, Ben Turner and Mason Warren. John McGrath and new signing Ricky Ravenhill started up in the centre with Oliver Roberts and Jimmy Phillips on the wings. Up front saw Nathan Jarman partner Isai Marselia. On the bench was Tyreece Robinson, Harley Kozluk, Pablo Mills, Curtis Burrows and Evan Garnett.

It took a while for the game to get going but after a while Sports created two opportunities from Jarman and Turner but one was saved for a corner and the other was put wide. New signing Ravenhill then put an effort wide from a header before a curling effort in from Turner found Jarman in the box but his looping header was just wide of the left hand post. Next a decent ball played over the Athletic defence into the path of Marselia found the dutch forward and he squared the ball to Jarman who from a short distance out blazed an effort over the bar.

But just before half time Sports got the break through that was the reward for a great first half performance. Marselia was played in on the edge of the box, cut inside and smashed an effort low and hard into the bottom left corner to give Sports the lead at the half time break.

However a terrible start to the second half saw Sports pegged back immediately. After a corner kick into the box there was an almighty scramble which let striker James Walshaw have an effort bundled over the line causing himself an injury in the commotion but was able to carry on. It was now Scarborough who were having the lion share of the game now and they tested Sports with many efforts on goal, making King work hard to keep the scoreline level. Another chance with a headed effort from Walshaw went wide which gave Sports another scare. The first change for Sports saw Garnett come on for Jarman. Two long range efforts from Phillips and Ravenhill really rested the keeper in the Scarborough net but he passed both as both were palmed out for corner kicks. Two further chances proceeded for Athletic as two further efforts from Walshaw one from close range saved by King and a headed effort over the bar could have given the Sea Dogs the win.

The final change from Sports saw Phillips come off and replaced by Pablo Mills. The final chance of the game fell to Sports as a fantastic Oliver Roberts free kick was tipped really well round the post by the Scarborough keeper. But that was all the action and the game ended 1-1 and both sides went home with a point. McGrath will have seen many positives having not lost to a top side in the league with plenty of the side having good performances. Now the next task is to gain an away victory in the league. That work starts on Saturday when Sports travel to Manchester to face Hyde United (29th September) with a 3pm kick off.