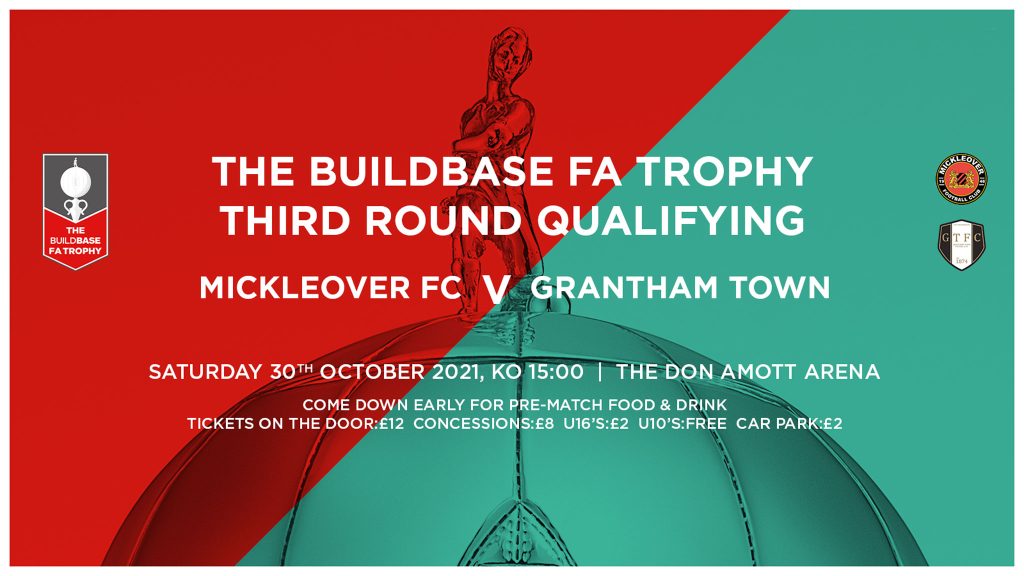 It’s time to take a break from the NPL campaign to host Grantham Town in the FA Trophy this weekend.

Like Mickleover, Grantham have struggled again this season, and sit at the bottom of the league table, three points adrift.

They have only taken two points at home, one from our visit last month. But away they have had three wins and two draws, beating FC United 1-0 a few weeks ago.

They played Warrington last weekend and went down again 1-2.

Goalkeeper Jim Pollard came to Grantham in July 2020 from Maltby, having previously had a season at Barrow.

James Williamson is an experienced defender and the club captain, who lists Tadcaster, Matlock and North Ferriby among his previous clubs.

Defender Tierry Latty-Fairweather has been on loan from Burton Albion, he’s an ex Nottingham Forest youth player too.

Central midfielder Shane Clarke is a recent signing from Spalding Utd. A former Lincoln City Academy player, he was briefly at Gateshead following his release, before his first spell at Boston Utd.

He then moved on to Gainsborough, Worksop and Tamworth, before returning to Boston in 2016. A second stay at Gainsborough preceded his move to Spalding in August 2020.

Henry Eze is another new signing. The centre back has played at Rushall Olympic, Romulus, Kings Lynn, Kettering, Solihull Borough, Quorn, Barwell and Stamford before arriving at Grantham.

Midfielder Finley Shrimpton is on loan from Scunthorpe until January, he has previously been loaned to Frickley Athletic too.

Ali Aydemir is primarily a winger, a long serving player who was previously at East Hull and Goole.

Midfielder Harvey Grice is on loan from Alfreton Town. The ex Nottingham Forest Academy player has come through Alfreton’s own youth scheme.

After six years with the Owls and a loan at Darlington, he joined Sheffield FC. He moved on to Worksop, Rainworth MW, Lincoln Utd, Gloucester, Hednesford, Telford, Evesham and Goole before Bridlington Town preceded his move to Mickleover in 2019.

He then moved to Barton Town and finally Pontefract, before coming to Grantham this summer.

Lee Shaw is another recent arrival from Alfreton. The striker was previously at Grantham in 2018, before moving to Chesterfield. A loan at Guiseley preceded his move to Alfreton just over a year ago.

Another of the new signings is Jake Wright, a young midfielder who has arrived from Ilkeston, having previously played for Quorn.

Former Mansfield and Chesterfield striker Mason Lee is another new arrival, he’s from Ilkeston too.

Attacking Midfielder Manasse Kianga arrived during the summer, he was previously at Rossington Main.

Michael Williams is a central midfielder, who came to Grantham from Alfreton. He was at Ilkeston for five years, before moving on to Matlock Town, Gainsborough and Sheffield FC.

Joe Parkin is another young midfielder stepping up from Handsworth Paramore, while Sisa Tuntulwana has also been a regular squad member this season.

Kick off is at 3pm at the Don Amott Arena.