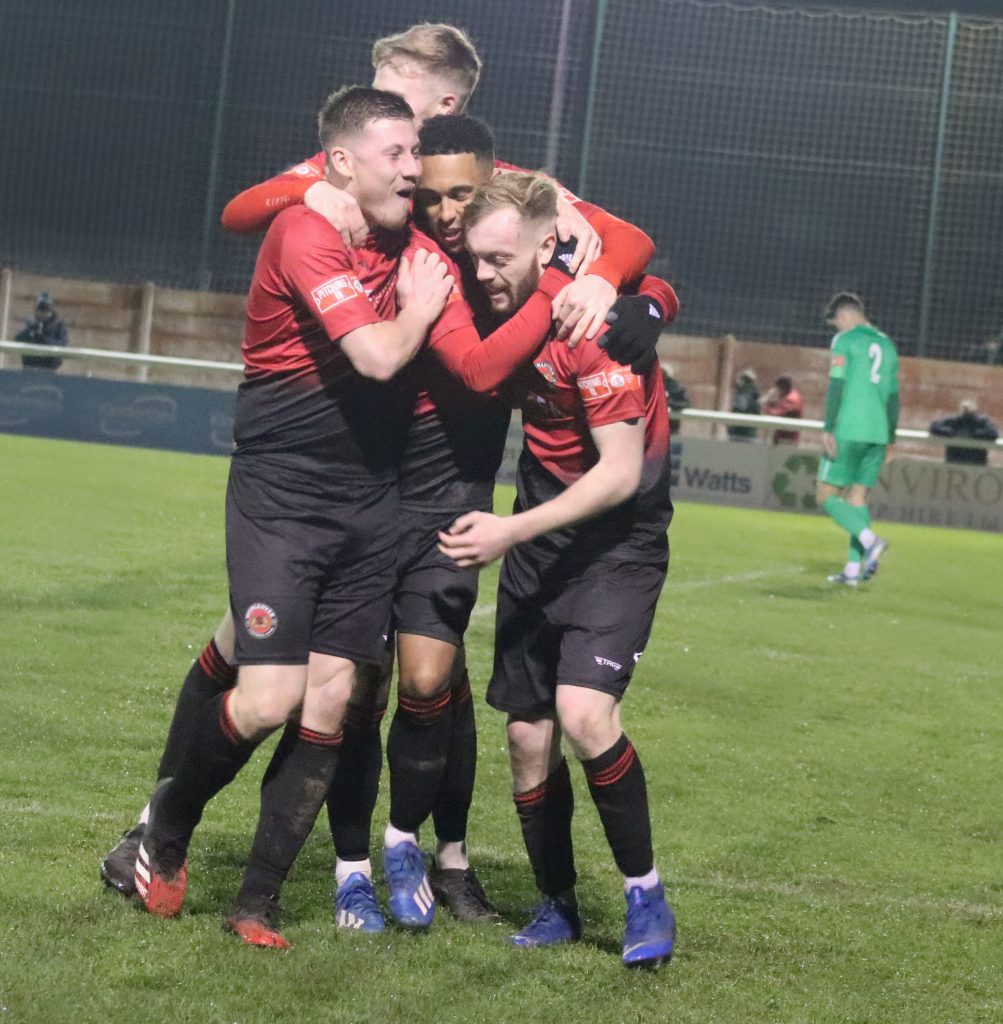 Mickleover extended their unbeaten run to seven as they tore the previously unbeaten Nantwich Town apart for a dominant 4-0 victory.

Hot of the back of the 5-0 FA Trophy win against Dereham, Mickleover made the short trip up the M6 to Nantwich Town.

Nantwich kicked off and strangely lobbed the ball straight towards goal and safely into Hawkins hands, before a more logical attack was intercepted by Milner.

The hosts could easily have gone one up in the third minute when Hawkins called for the ball, but Wright’s back pass fell short, was collected by Scott McGowan whose shot was just wide.

Webb had a half chance a couple of minutes later, when Morris put a dangerous cross into the box. The Nantwich defence had trouble clearing it and Sports fired it back in from the right, before it was eventually punched away by keeper Greg Hall. 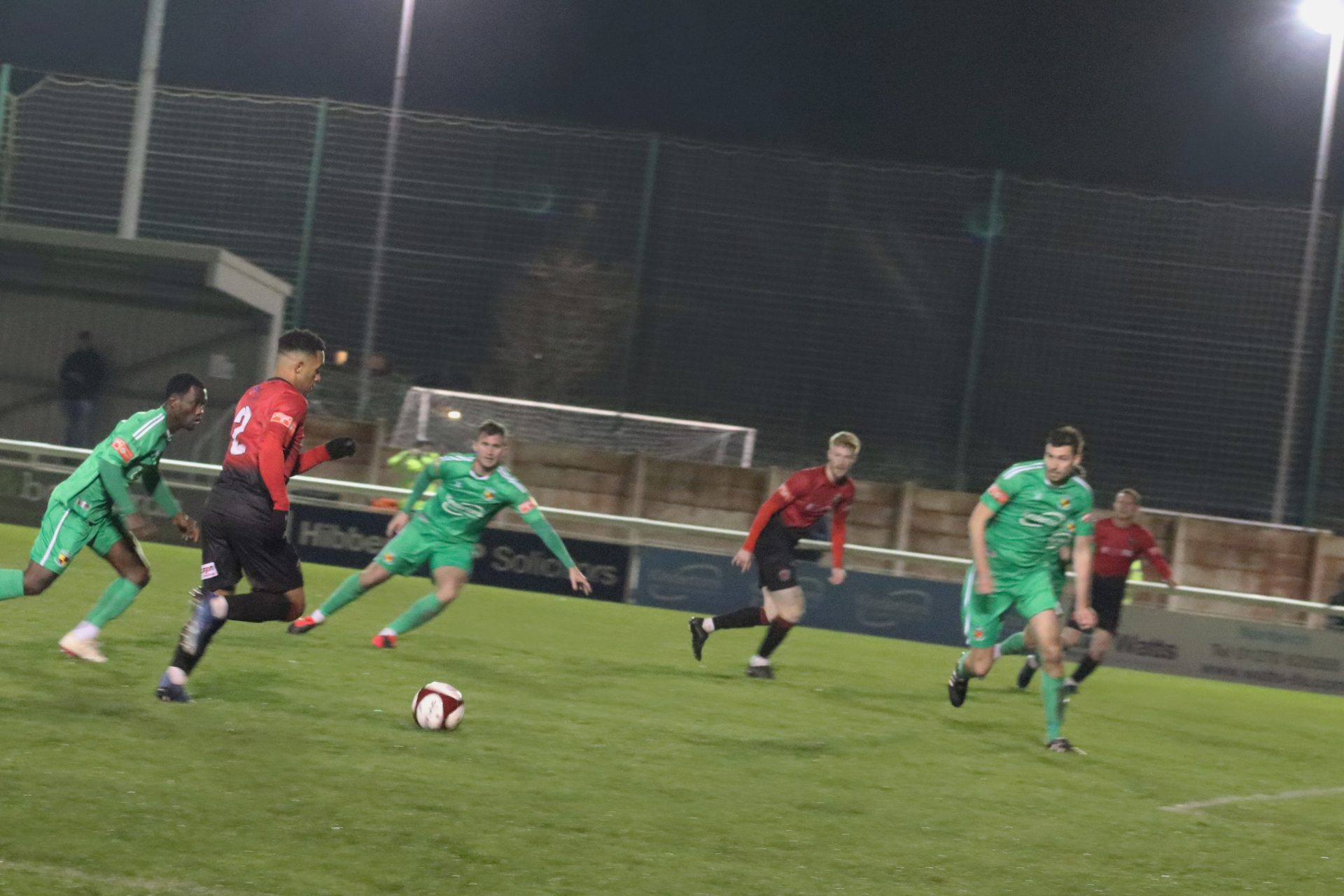 McGowan then got a break for the home side, but his shot was saved by Hawkins, close to his left hand post.

But Sports were straight back into attack themselves, firstly with a Morris cross finding Beavon, whose shot from just outside the area was saved, and then Wright put Webb through, only to be flagged offside.

There was a weak appeal for a Nantwich penalty after Sean Cooke went down, then a Caspar Hughes free kick was chipped to Matty Devine, whose cross was easily taken by Hawkins.

On the 15 minute mark Bennett intercepted as Nantwich pushed forward, then Webb picked out Beavon on the left. His shot passed the face of the goal, before being pushed out for a corner.

But Sports only had to wait another minute, as following a well saved header from Beavon, sustained attacking and a crowded box combined for the ball to break left to Watt, who slid the ball passed Hall into the right hand corner 1-0. 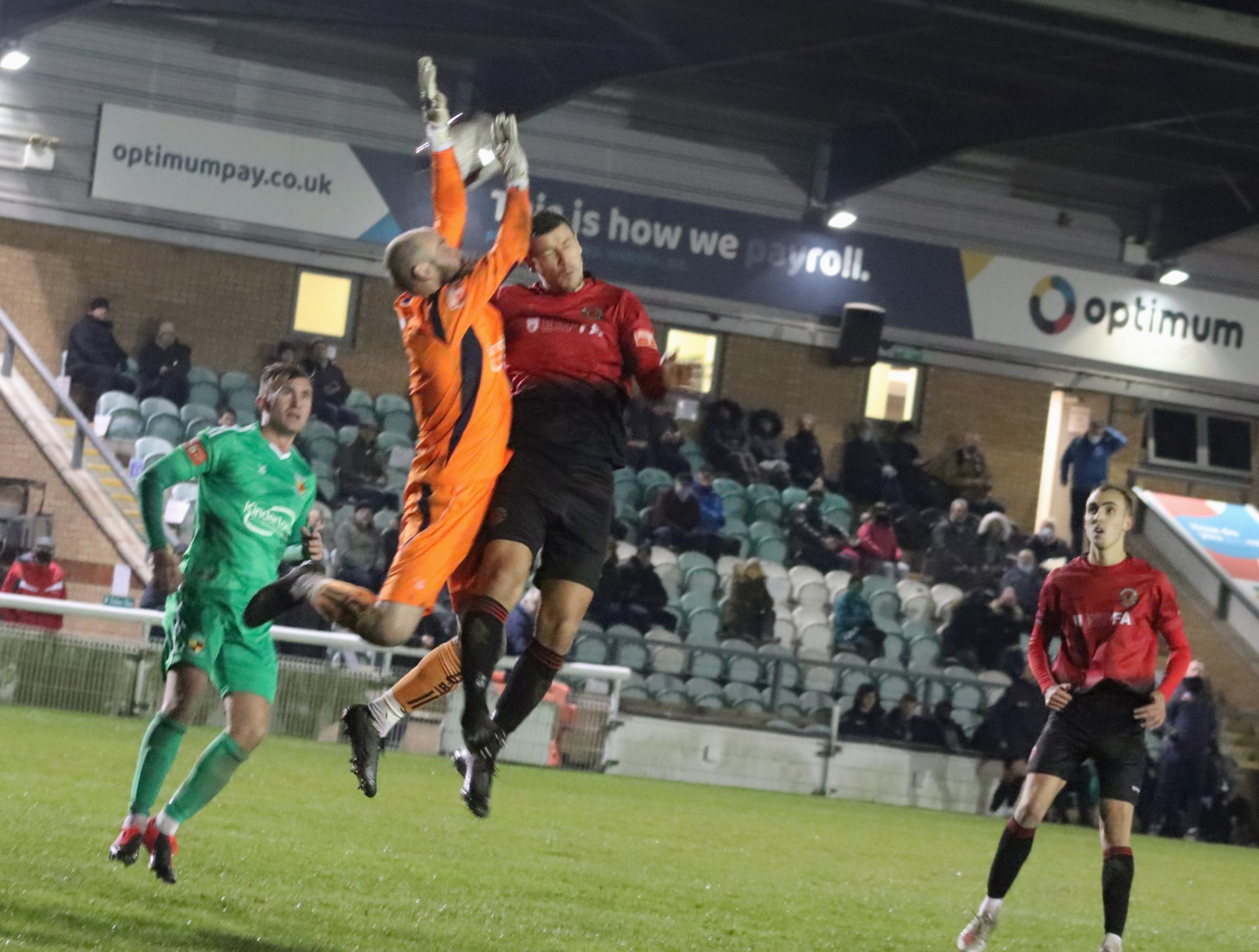 Nantwich continued to try and push forward, after another attack was blocked, Webb got clear and Warren found space, but the striker tried himself to no avail.

Although the Dabbers had a number of free kicks, they created little from them, Watt and Morris had to join forces in the 23rd minute though to clear the danger.

Milner, Wright and Warren were continuing to find runs from midfield, with Agustien the calming influence of experience and skill.

28 minutes in and one of Milner charges upfield picked out Beavon, whose shot was deflected onto the left hand post by Hall. Two minutes later Webb lobbed over, one on one with the keeper.

There could easily have been a second goal for Mickleover when Milner’s shot in the 32nd whistled across the front of the goal and out just wide of the right hand post.

With Nantwich pushing for an equaliser before half time, they left themselves wide open at the back and Beavon found space again on the left and had his shot saved, after a longer spell of Nantwich pressure.

Cooke then tried a shot from well out, which cleared the stadium wall and just before half time Mickleover skipper Warren had picked up an interception and had a go himself, which was well wide. So 1-0 at half time but could easily have been 4.

There were no changes for Sports at half-time, but within a minute of the restart Webb had a great chance in front of goal, but barely connected, as Hall picked the ball up.

But the second goal soon arrived with Milner again the creator. His strong run put Bennett through, who placed a firmly shot into the back of the net from the right. 2-0.

Only a minute later Wright spied an opening in the Dabbers defence, fired in one of his signature rockets, which was partially blocked on its way over the bar. 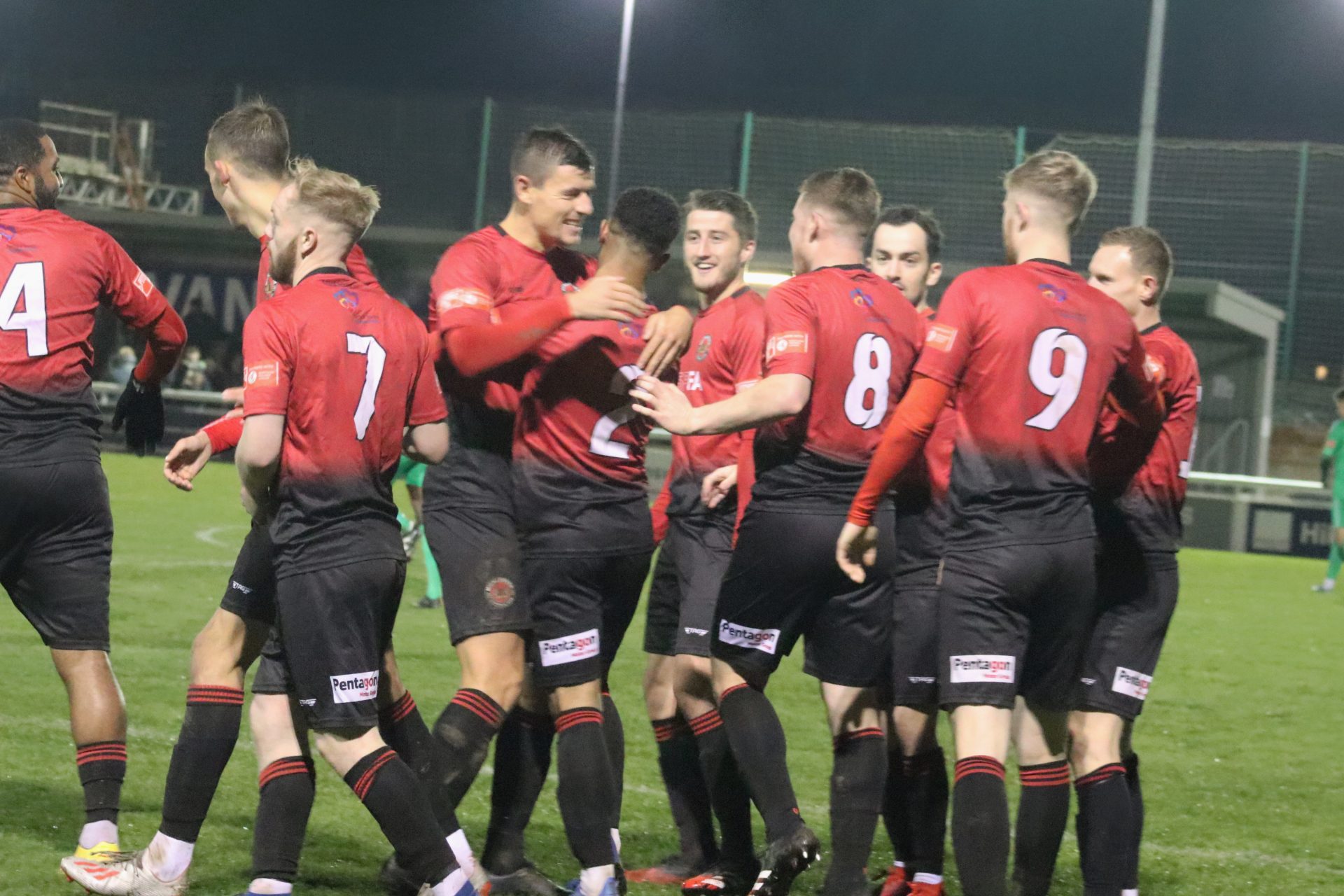 Milner was then booked for bringing down Mwasile, but the free kick was wasted yet again, with Cooke’s effort well wide.

Nantwich were in the game more, but still unable to create much, as Watt and Butler stayed solid in the centre of defence, with Bennett and Morris covering the wings.

Just after the hour mark another good run from Wright found Beavon, and his cross from the right found Webb unmarked and with time, before firing passed Hall 3-0.

Wright fired another opportune shot over from well out, just before Mickleover made their first substitution, Verma for Agustien.

Sports attack was firing on all cylinders and after 74 minutes a Warren chip was easily saved, before Webb broke, with Milner and Morris waiting in the box, but put in a weak shot himself, easily saved.

Even with chances Nantwich were off target, with shots both wide and over. 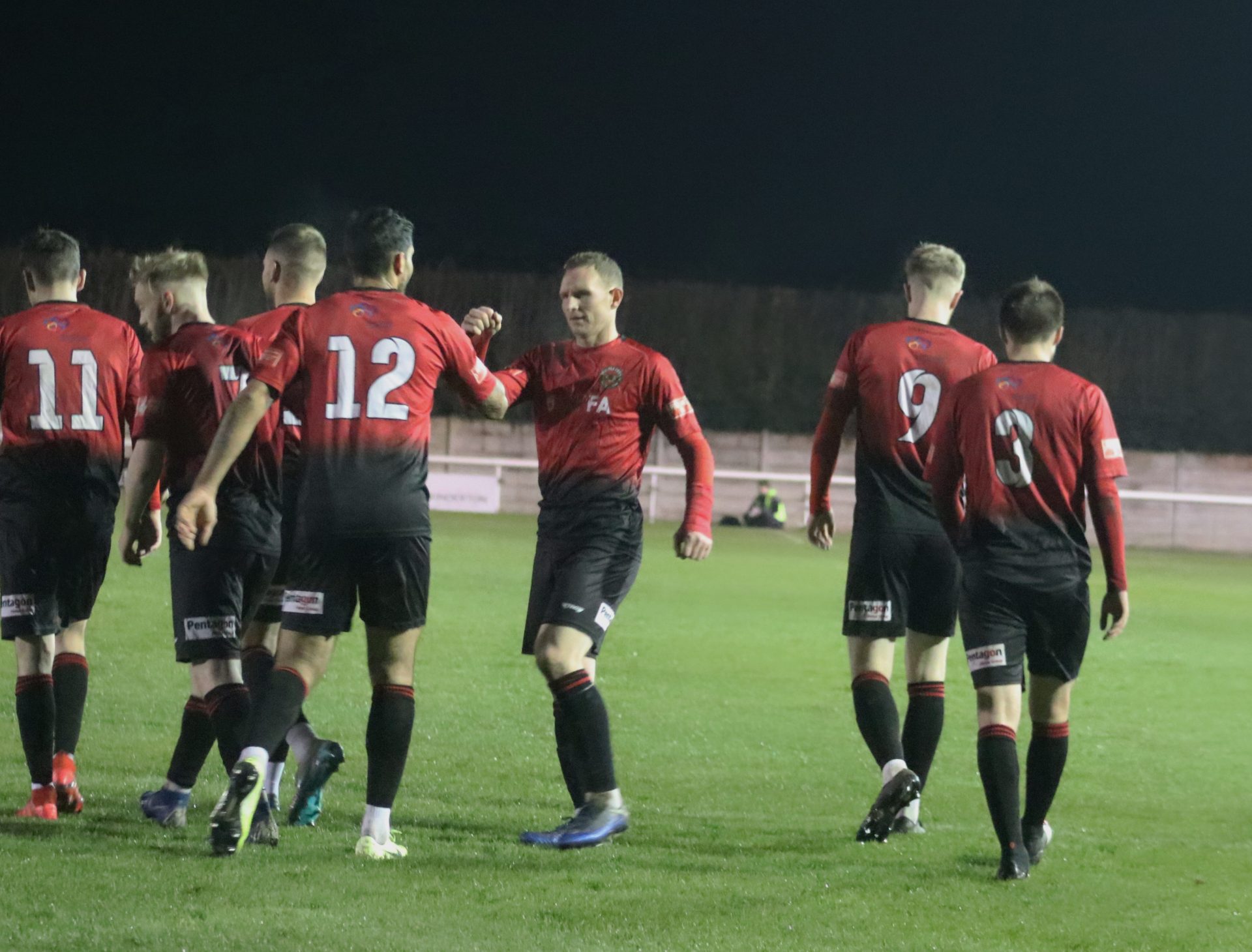 Cooke was in the referee’s book after hacking down Morris and the following free kick had Hall at full stretch again.

Ben Harrison then had to clear another attempt off the line, before Gowing came on for Wright.

Then came number four, Milner had placed another telling through ball to Verma on the left, who made no mistake for 4-0. “I had to put that one in,” he said.

Satchwell was a late sub for Milner, but after two minutes add on, the whistle blew for a totally convincing win, which takes Mickleover to the top of the NPL before Lockdown but leaves us with an uncertain future.

So what did the gaffer think of the nights performance?  “Superb, from the first minute to the 92nd. Four great goals and the work rate was phenomenal.

Real quality football and with that amount of work rate, you have to be in with a chance every time.