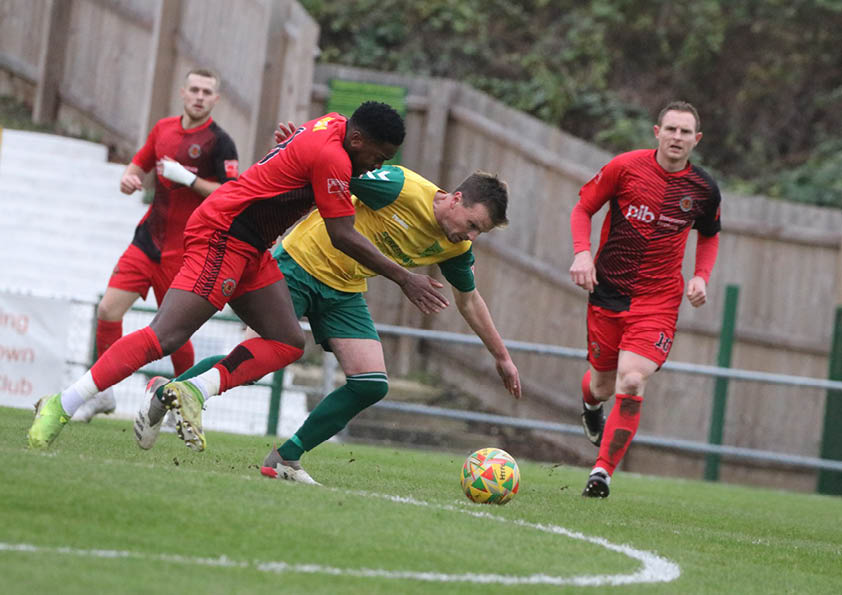 Mickleover hadn’t played Hitchin Town in a league match before last Saturday’s encounter, but on our last visit to Top Field we went down 0-3 in the FA Trophy.

It couldn’t have started worse for Mickleover when barely into the second minute Hedge seemed to be wanting to pass out from the back, but the defence failed to pick up on the intention and Diogo Freitas Gouveia intercepted and gave Hitchin a very early lead, 0-1.

A couple of minutes later Rose put in a strong shot for Sports just wide of the post, but as they tried to push forward, the hosts defence kept any threat at bay.

13 minutes in and it was another defensive error, when Dolan lost possession close in on the left and Steve Cawley fired the ball home, 0-2.

Beavon and Reeves were having to come deep to try and pick up the ball, which saw Mickleover struggle to break out of their own half.

A free kick after 14 minutes came to nought after Beavon was fouled on the edge of the box and it was Beavon again eight minutes getting a shot on the break, but failed to trouble keeper Charlie Horlock, who saved easily.

It was soon getting worse when Mann was at fault , against losing the ball as the last man, after a cross from Ashley Hay. Cawley picked it up for his second and Hitchin’s third, after 24 minutes, 0-3.

Every attack from Hitchin was beginning to look like a serious threat on goal, as the Mickleover defence lacked cohesion and struggled to relieve the continuous pressure.

Dales managed to get a rare run down the left, but his shot was easily saved and after 27 minutes Dales broke again heading for a one on one with the advancing keeper, who got there fractionally earlier than the Mickleover player.

Cawley had another shot over the bar on the half hour, before Rio Da Silva put another effort just past the left-hand post.

Wilson and Rose tried to be creative, playing out to the wings from fairly deep. Both Yeomans and Dolan had their paths down the wings virtually cut off by the home defence, but Wilson finally got a ball through to Greaves on the left, who was then fouled.

Two consecutive free kicks failed to succeed, but then a creative build up on the right from Dales, found Beavon in the middle, with both time and space. A quick turn and it was in the back of the net, 1-3 after 44 minutes.

Only a minute later Reeves got a run into the box, the ball was handled as a defender raised his arm, but the referee awarded a corner, which Mann headed over. So it remained 1-3 as the half-time whistle blew, with hopes of a drastic recovery from Mickleover in the second-half.

Barely had the second half got underway when there was a handball in the Mickleover box, but fortunately the referee failed to see this either, which cancelled out the penalty he failed to give for Mickleover in the first half.

It was a more positive start from Mickleover, and for a while there was some optimism that they could salvage something from the game.

A Wilson free kick was fired into the wall and found Dolan on the left. Dales then picked up and Horlock made a diving save to give Mickleover a corner.

Greaves then hit the bar after 55 minutes and cracked in a another shot a few minutes later after a Dolan cross, before Beavon almost broke through on the hour, had the keeper beaten, but the shot was deflected.

Warren was on for Dolan, as Sports had another shot whistle past the left-hand post. Then after 70 minutes Warren sent Reeves on a run down the left, his shot brought a diving save from Horlock and another corner.

But a minute later Hitchin had their first real chance of the half, with Bradley Bell unmarked on the left, he made it 1-4 for the hosts.

Osideko was on for Reeves and Scott for Dales and although there were a few more Mickleover shots before the final whistle, they were mostly deflected and posed no real threat.

So it’s back down to sixth in the table, but with no midweek match, we now face high flying Leiston at the Don Amott Arena on Saturday.