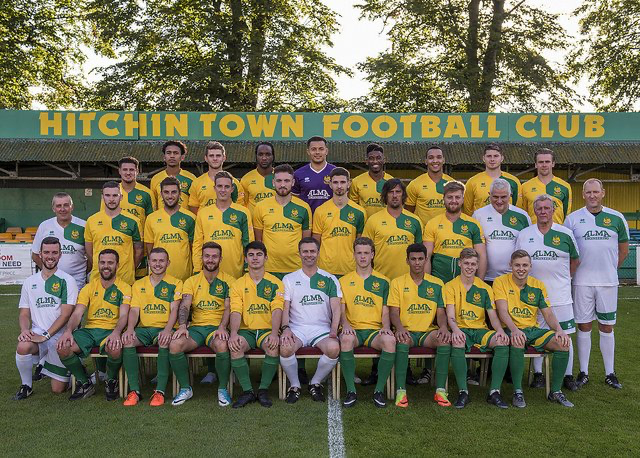 The date for the game may not be known yet, but let’s just take a look at some of Hitchin Town’s history, our next opponents in the FA Trophy.

The Canaries got to this stage after beating Herne Bay at home 3-1 in the last round. 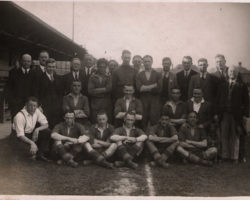 Hitchin Town can trace its roots back to 1865 when Hitchin FC was formed. The club took part in the first FA Cup in 1871-72, and reached the quarter finals of the competition, losing to eventual finalists Royal Engineers. That first Hitchin club folded in 1911, debt-ridden and the victims of a fire at their ground.

It was not until 1928 that Hitchin Town FC was formed, and it was at this point that the nickname, “The Canaries”, was established. The club colours of yellow and at that time, blue, were also agreed upon.

The 1930s were halcyon days for Hitchin Town FC. Promotion to the Spartan Premier Division was won in 1931, but it was the cup successes that captured the imagination of the Hitchin public. Although there is little doubt that Hitchin won more games than at any time in their history, the standard of opposition has to be considered when determining whether the Canaries’ side of the period was the finest in the club’s history.

Nevertheless there is little doubt that this was a golden age for Hitchin Town. The club won the AFA Senior Cup in 1932, beating Derbyshire Amateurs in the final and in 1935, won the Spartan League Premier Division.

The club entered the Athenian League in 1939, but after two league games and a Herts Charity Cup tie, all of which saw Hitchin score seven goals, Adolf Hitler intervened.

At the end of the 1962-63 season, the Canaries moved into the Isthmian League. This move was not an easy one for the club, and the early years were a constant struggle. Money was a problem, and there was a hint of scandal when club President Syd Stapleton revealed to the media that the club was paying its “amateur” players. It took some time before the clouds dispersed and during this period, the club said farewell to Laurie Scott.

It was not until Vince Burgess came on board that the club moved forward again. Burgess, a successful coach before he went to Hitchin, brought experienced players to the club who knew how to win.

In 1968-69, Hitchin finished runners-up in the Isthmian League and a year later, won the London Senior Cup, beating St.Albans 4-2 in the final. Burgess declared that Hitchin had “arrived” by winning what was then a highly prestigious competition. Top Field was shocked a few months later when Burgess left the club.

The 1970s was a period characterised by some exciting cup-ties. The Canaries reached the FA Cup competition proper four times – in 1973-74, 1974-75, 1976-77 and 1978-79, although a giant-killing eluded them. By the end of the decade however, the club was in decline and the 1980s was a dismal decade in which finances were limited and the emphasis was on youth.

In 1988, Hitchin Town suffered relegation from the Isthmian Premier for the first time. Near misses in the previous three seasons had hinted that a fall was coming, but it was still a major shock to the club. It took five years for them to get back to the Premier Division, but in between, the club had suffered major financial hardship.

It was Andy Melvin, the new owner-manager of Hitchin Town who led the club back to the Premier Division, winning the Isthmian First Division title in 1992-93. Melvin, a good man-manager, was also thrifty and built a team on very limited resources. In the club’s first season back, he took them to eighth place and in 1994-95, fifth position.

Andy Melvin will be remembered for his part in two exciting FA Cup runs, however. In 1994-95, the club became giant-killers for the first time, beating Hereford United 4-2 at Top Field in the FA Cup first round.

The club had started its cup run in the First Qualifying Round and had been close to exiting on more than one occasion. A year later, the Canaries grabbed their biggest scalp, beating Bristol Rovers 2-1 in the first round, thanks to two early goals. It gave them a second round tie at Gillingham, which was lost 3-0.

At this time the club gained more media attention than at any time in its history, but by 1998, relegation had come once more. However the club won promotion back to the Isthmian Premier Division at the first attempt, with a new and younger team.

In an age when clubs seem to lurch from crisis to crisis financially, Hitchin’s recent history has been relatively stable. Andy Melvin stepped down in 2001, handing over to his assistant Robbie O’Keefe. Robbie was the mastermind of the club’s youth academy, and at times, O’Keefe promised to bring success back to Hitchin.

In 2003, however, he left the club, and former Chelsea and England striker Kerry Dixon took over. At the end of the 2003-04 season, Hitchin left the Isthmian League after more than 40 years, and moved to the Southern League. At the halfway stage of the following season, Dixon, who was unable to commit himself fully to the job, was replaced by Darren Salton. He had to rebuild a team that had alarming weaknesses in every department.

The last few months of the season were tough and Hitchin failed to win any of their last 11 games. But the following year was better and at the end of 2005-06, the Canaries won the Southern League Cup, beating Bromsgrove Rovers in the two-legged final.

In 2006-07, the Canaries started well and at the halfway point were among the title challengers. But a spectacular collapse, fuelled by player unrest, saw them fall down the table and into relegation trouble.

Eventually, they finished 11th, perhaps a flattering position, but nevertheless one which secured Premier Division football in 2007-08. After a lack lustre start to 2007-08, Salton was released by the club and former player Darran Hay was appointed as manager. Hay had to rebuild his team and it took time to turn things around, but a revitalised squad, with a strong team spirit, lifted Hitchin out of trouble.

After a poor start to the 2008-09 season, Hay left in January 2009. Colin Payne, the former Chertsey, Northwood and Boreham Wood manager was appointed in February 2009, but despite an improvement, the club was relegated at the end of the campaign. Payne rebuilt the squad in the summer of 2009, with the aim of achieving promotion at the first attempt.

They enjoyed a successful 2009-10, winning 31 of 42 league games. A vibrant young side was moulded by Payne and his assistant Carl Williams and for long periods, the Canaries topped the Zamaretto Midlands Division., losing just four games in the league but Bury Town topped the division by two points – despite Payne’s men amassing 100 points.

As only one team was automatically promoted, Hitchin had to enter the play-offs for the second promotion place. Sadly, the young Canaries ran out of steam and lost the play-off semi-final to Slough, a team that finished 23 points behind Hitchin!

A few days after the end of the season, Payne left the club to join Hemel Hempstead. In his place, Carl Williams was appointed as manager. He had a tremendous first season in charge and for much of the 2010-11 campaign, Hitchin looked certainties for the title. But a mid-season drop in form gave local rivals Arlesey the chance to take top place. On the final day of the season, the two clubs met at Top Field for the title decider. Arlesey won 1-0 in front of over 1,500 people, but the occasion was marred by the ungentlemanly behaviour of Hitchin’s opponents.

Williams and his team cast that disappointment aside to beat Slough and Daventry in the play-offs to claim the second promotion spot. In their first season back in the Premier, Hitchin enjoyed some bright moments, notably beating eventual champions Brackley and promotion chasing AFC Totton and Cambridge City.

Once again, the goals of John Frendo lit up the campaign and attendances at Top Field were among the best in the division. The final placing of 14th was considered satisfactory and the club went into 2012-13 looking to improve on that showing.

Carl Williams’ second season in charge started brightly but despite the massive goals contribution of John Frendo (who won the non-league football “Golden Boot” the previous season with 44 goals), it proved a difficult season overall. However, despite a couple of months where confidence had ebbed away and relegation looked a distinct possibility.

Previous manager Colin Payne returned to assist the Management team, and the Canaries managed to pull through with three or four astute loan signings bolstering both confidence and results. They finished a creditable thirteenth, but despite this Carl decided it was time to take a break from the managerial role and focus on his young family.

Mark Burke was appointed manager in the summer of 2013 and Carl’s side almost entirely moved on. Despite this Burke and his assistant Adam Parker recruited some new young talent and finished in a creditable 13th position, same as the previous season.

Season 2014-15 saw the addition of Jonny McNamara from Arlesey and Charlie Horlock on loan from Wycombe Wanderers, and the experienced Brett Donnelly returning to the club for a second spell from Biggleswade Town.

With a solid backline including Alasan Ann and Dan Webb and the huge promise of youngsters such as Sam Barker, Matt Lench and Lewis Rolfe being realised, the flowing football produced reaped dividends and Hitchin finished in ninth position, their best-ever in the Southern League.

The 2015-16 season proved to be even better. The season started with the prestigious game against a full-strength Premier League Norwich City side, to celebrate the 150th anniversary of the formation of the first Hitchin football team.

Despite the ten goal defeat, and defeat on the first day of the season to the newly promoted Stratford Town at home, Mark Burke’s young side (average age 24) picked up, went from strength to strength, defied all expectations and finished in third place in the League, showing a marked improvement on the previous season and qualifying for the Play-Offs. Here they took a 2-0 lead in the semi-final against the eventual winners Hungerford Town, but eventually ran out of steam and succumbed to a 3-2 defeat.

Again despite this tremendous disappointment, this young team showed great strength of character and picked itself up again to beat National League Boreham Wood to win the Hertfordshire Senior Cup for the first time in 19 years.

After a fantastic penalty shoot-out victory in the semi-finals at Merthyr Town, the Canaries took on Leamington for a place in the National League South. They came within one minute of promotion in normal time before conceding a 90th minute penalty equaliser, and then succumbing to a winning goal from Leamington six minutes from the end of extra time.

They retained the Hertfordshire Senior Cup by beating Bishops Stortford 2-1 and also reached the Herts Charity Cup Final, where a “bad day at the office” resulted in a 0-1 defeat against lower league opposition in the form of Cheshunt.

The Canaries entered the 2017-18 season knowing that the League competition would be considerably tougher, with a greater number of well-established and hopeful teams. They finished 11th, but have struggled over the last two seasons, finishing 18th in 2018/19 and were in 17th when last season was abandoned.

Mark Burke is still in charge with assistant Adam Parker, in their seventh year!

Currently they lie 10th in the Southern League Premier Division Central, which is on the same level at Mickleover, tier 7 and 8.