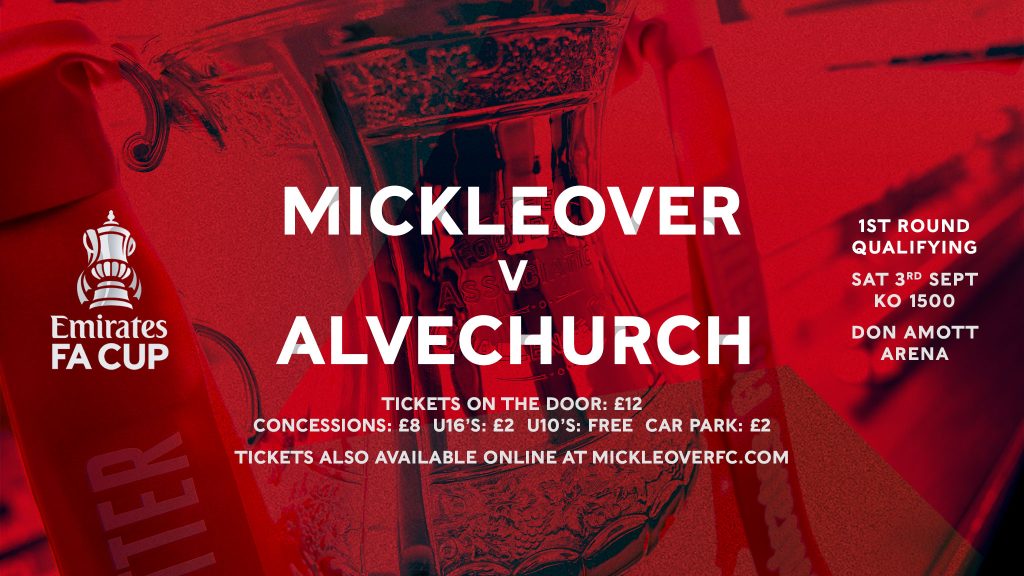 Having beaten Leek Town away last season, Mickleover were knocked out in the following round 1-3 at home to Basford.

Mickleover have to make a couple of changes to the squad with both Elliott Reeves and Jordan Fankwe suspended and Callum Chettle with a back injury.

Our visitors are currently two places below us in the league in 16th, with just one draw away from home, along with two defeats. They started the season with a 3-0 home win over Stourbridge and followed up with a 2-0 over Rushden & Diamonds, but lost their last game 1-3 against Tamworth.

Manager Ian Long came back to the club in February 2020, having previously been there for four years, before joining Stourbridge.

So far they have used two goalkeepers, Dan Jezeph and Leon Phillips. Jezeph was a Walsall Junior, who was atTamworth and Worcester City before joining Alvechurch in July last year.

Phillips was a Nottingham Forest youth player, after turning down Birmingham City and West Bromwich Albion. After his release he had a year at Kidderminster, before joining our hosts in August 2021.

Skipper Ashley Carter is a centre back that came from Halesowen in May 2021. He was a Wolves Academy player and was loaned to Chesterfield and Tamworth before joining Kidderminster on his release.

He then came to Alvechurch in July 2017, joining Nuneaton a year later. November 2018 he was back at Alvechurch, before moves to Stourbridge and Halesowen preceded his third and current spell with our visitors.

Left back Ethan Sephton is one of the ever-present players this season. He was picked up by Derby County from Solihull and had eight months with the Rams Under 23’s before coming to Alvechurch in October 2020.

Peter Taylor has played every game so far too, he is a defensive midfielder, who started out at West Bromwich Albion. He was loaned to Stourbridge before coming on loan to Alvechurch in March 2020. But after four months back with the Baggies, he returned on a permanent basis.

Ex Aston Villa Junior right back Brad Burton has made one start this season, after joining our visitors last October.

Defender Jamie Willetts is a long serving player who made his name initially with Stourport Swifts. After a spell at Hereford he then tasted success with Alvechurch for three years, before moving to Stourbridge. He then returned to our visitors in March 2020 and has sometimes captained the side too.

Jed Abbey can play midfield or right back and started his career with Wolves. He went to Telford after his release and came to Alvechurch pre-season. He is another ever-present.

Midfielder Tom Edge was a pre-season signing too. He played junior football at Telford and Walsall before heading for the US, where he had four years at Campbellsville University in Kentucky.

Jack Concannon was another one of the pre-season signings. An ex Birmingham City Junior, he was loaned to Sutton Coldfield and Tamworth, before going toTamworth on his release.

Striker Leo Brown arrived in July too. He was picked up by Birmingham City from Crusaders FC, before returning to Northern Ireland with Ballymena and Ardsafter three years. He came back to England with Sutton Coldfield in September 2021.

Winger Stanley Asomugha is a winger who arrived from West Bromwich Albion’s Academy in February, but he is yet to make a start this season.

Tyrell Skeen-Hamilton is a young striker in his thirdspell at the club. After a spell at Birmingham City, he had two years with Bournemouth, which included loans at Salisbury and Gosport.

He came to Alvechurch in July 2020 after his Bournemouth release, moving to Telford after a year. He was then loaned back to Alvechurch, before making his stay permanent earlier this year.

Former West Bromwich Albion defender Ben Cassidy holds the record of being the youngest Alvechurch debutant, when he first appeared for the first team in 2018 aged 16.

Ellis Jones is yet to make a start this season, but is a central midfielder.

Former Coventry Academy defender of midfielder Jamie Spiers is their newest signing. He moved to Stratford Town at 14 and was at Shrewsbury until the end of last season.

Defender Maxwell Ngbeken and midfielder Rory Regan are yet to start this season too, but defender Harry Williams and Jack Hallahan both hit the headlines after being hospitalised following a clash of heads in the opening game of the season.

Hallahan is a former Irish Under 19 midfielder, who was at West Bromwich Albion, Hednesford and Bromsgrove, also having  had a spell in Cyprus too.

Kick off at the Don Amott Arena is 3pm as usual.