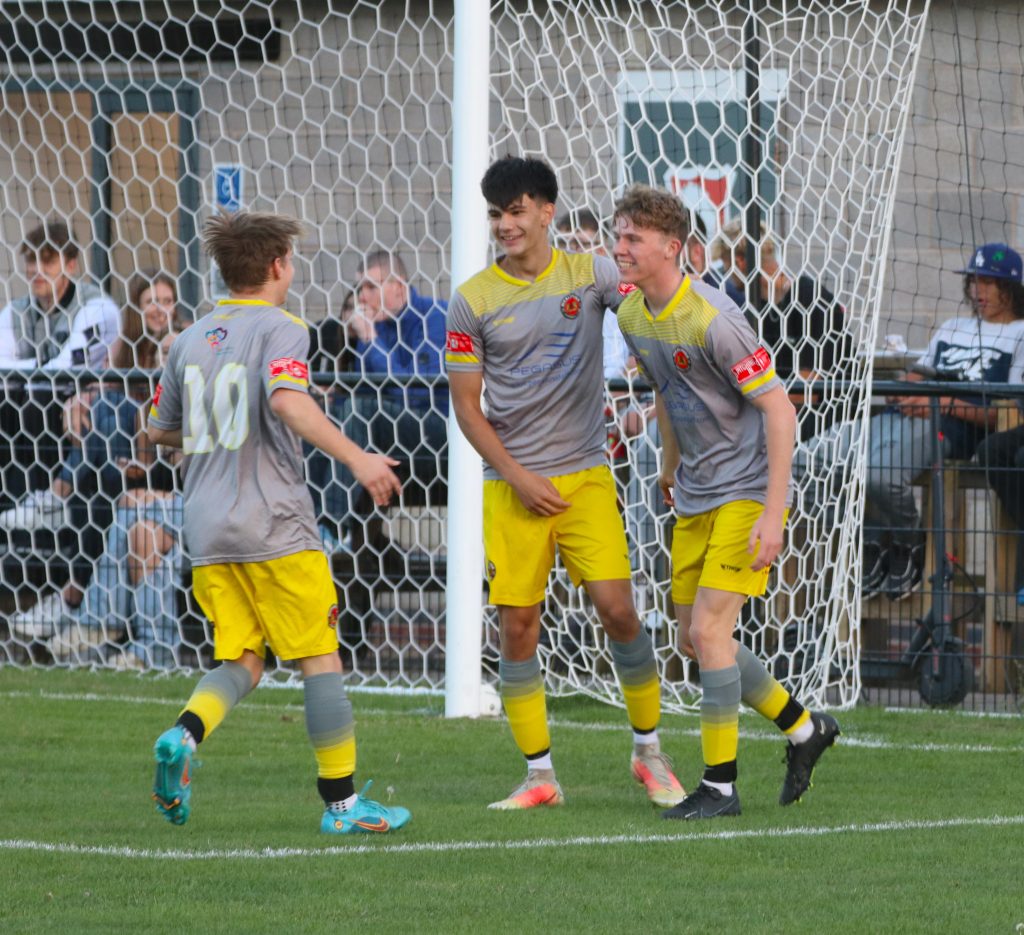 Mickleover youngsters marched into the next round of the FA Youth Cup in fine style at Birstall Utd, with Zak Sandhu hitting a hattrick in a 6-1 victory.

It was barely into the second minute of the game when Sandhu made it 1-0 from a Horleston cross, as Mickleover bombarded the hosts from first whistle.

Birstall managed a rare shot after seven minutes which was easily taken by Bill. Tucker then created space for himself in the box and fired in a good shot, well taken by the host keeper.

Mickleover were able to take their time in being creative, as the home side seemed reluctant to push forward. They wasted a 13th minute free kick which was well wide, before Sports went close again four minutes later.

Atwal had found Leighton on the right wing, and his telling ball created a scramble in the Birstall box beforethe danger was eventually cleared.

It was Leighton causing havoc again down the right, finding Sandhu after 23 minutes. He held the ball, turned, and fired in to earn a corner, from which Rock followed up with a shot over the bar.

Four minutes later Ferron shot over too after collecting from a corner, as the emphasis switched to the left side.

Ferron put in another cross just after the half hour, just failing to connect with Brown. But the home defence was taking a pounding, as Parr found Brown again, he turned and fired a cracking shot onto the woodwork, after 34 minutes.

Ferron then crossed into the box for Brown to head over, as the young striker was managing to do everything but score.

39 minutes and Sandhu cut in from the left, but his pass came across the face of the goal, before Ferron’s shot went over the bar.

Sandhu then had another shot straight at the keeper before Parr’s cross found Horleston with a great chance in front of goal. But the young skipper failed to get his shot in as the half time whistle arrived.

Just like the first half they had barely kicked off and Sandhu was in space, heading for goal and it was 2-0,with Brown soon trying his luck again, winning the ball midway into the half and shooting just wide.

Ferron set up Brown again for a shot just over, but some good and precise build ups came to nought, with too many passes and no shot.

Mickleover went close again after a 68th minute free kick, when a blast from Rock was well saved.

Suddenly things changed following a Birstall corner when they fired in a cracking shot from the edge of the box to make it 2-1 after 70 minutes.

There were soon signs that the Birstall team were beginning to tire, some going down with cramp.

Tucker found Brown who wanted too much time and found his way blocked, just before Atwal struck from long range after 74 minutes, just over the bar.

It was Atwal on the attack again two minutes later after a nice Sandhu flick, but he just failed to connect. But then a cross from the right found Sandhu and he completed his hattrick at 3-1.

Birstall gave Bill a test after 77 minutes, but the young keeper was untroubled, as Bonser and Rock continuedto look a much stronger partnership in the middle of defence, than they had against Harborough in the last round.

Sub Dean Ironmonger had only been on a few minutes after coming on for Brown but made it 4-1 after 78 minutes from a Horleston set up.

The closing minutes became almost target practice forMickleover, with Leighton having a shot saved, before Horleston and sub Louis Barradell both found the net in the final four minutes for a convincing 6-1 victory.

We now await the draw for the First Round Qualifying, with games due to be played w/c September 12th.