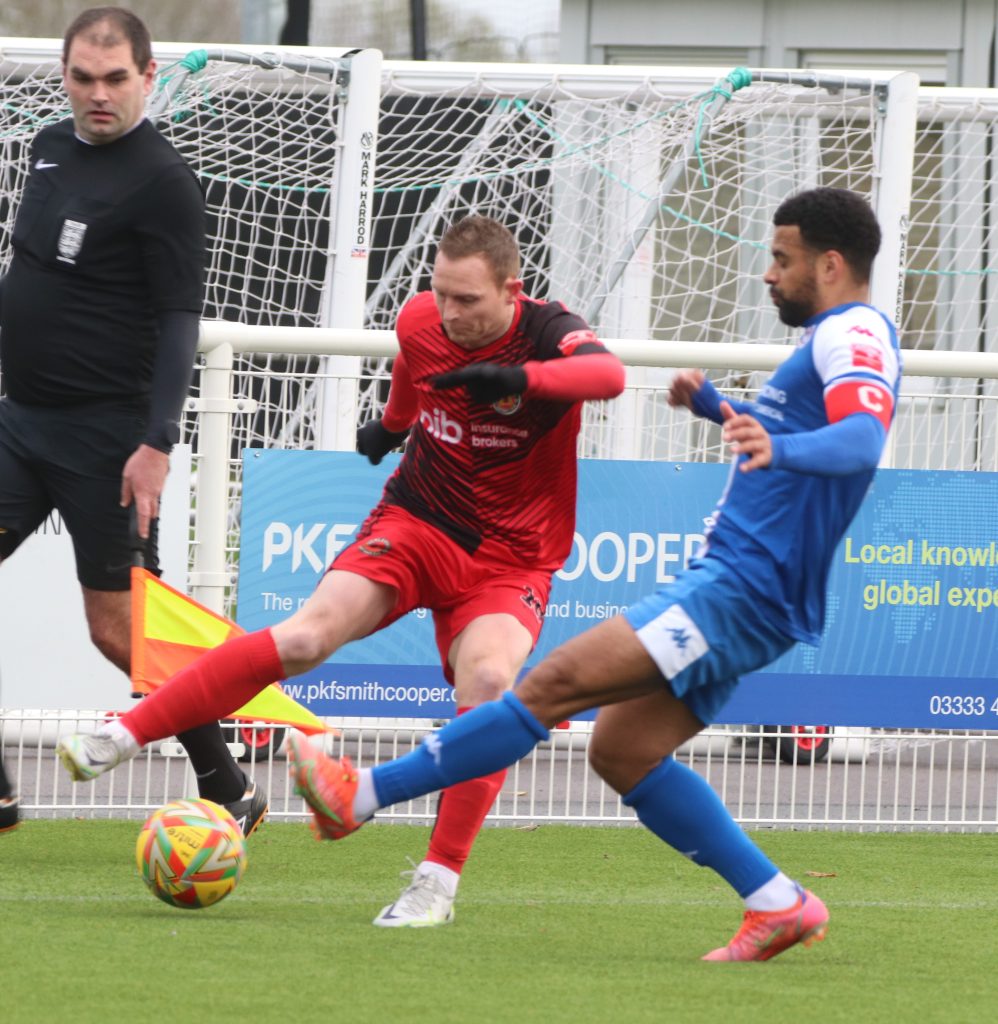 Following two consecutive 1-4 defeats, Mickleover were keen to add to their points tally to stay in contention for a play-off place. But no one could have anticipated how the game against title challengers Leiston would start.

Only 20 seconds on the clock and a long ball over the Leiston defence, found Dales on the right, whose chip had the beating of keeper Donkin, 1-0. Three minutes in, and against the best defence in the league, it was 2-0 with Beavon firing home.

The visitors then showed their grit when George Quantrell pulled one back after a cross from Ollie Saunders. So it was 2-1 and still only four minutes into the game.

There was another slight chance for Mickleover after 11 minutes when the keeper came well out of his goal, the ball was past him with Reeves chasing, but just too much pace on it to follow through.

Then two minutes later it was the visitors on the attack, with a ball from Mickleover’s right. The first shot from Joe Marsden was well saved by Hedge, before he then had to block the follow up from Seb Dunbar.

Leiston had started to gain the upperhand and were putting Mann and Watt under pressure in the middle of the Mickleover defence. Hedge made a fine diving save to his right to fend off a shot from Finlay Barnes after 16 minutes, before a Beavon cross was just out of Reeves’ reach at the other end.

But Hedge was soon busy again, with a great save from a Ben Fowkes effort 22 minutes in, before Barnes’ rebound shot was blocked and the danger cleared.

The home defence was finally breached again one minute later, when Quantrell set up Fowkes after Sports lost midfield possession, firing past Hedge, 2-2.

The equaliser triggered more activity from the Mickleover midfield, as Warren and Rose began to push forward, with Greaves and Dales starting to take the defence on.

Greaves tried his luck after 29 minutes, but his curling shot was held by Donkin, then Dales crossed from the left two minutes later, Beavon miskicked as Saunders tried to block him and Warren’s follow up shot was blocked.

Scott then put a dangerous cross in from the right after 39 minutes. Beavon managed to connect just, but he was unable to direct the ball and it went just over.

With two minutes left on the clock before half time Barnes had another shot saved by Hedge. Rose almost put Greaves in the clear too before Donkin intercepted and then Dales had the ball in the net but was deemed offside.

Osideko started the second half in place of Reeves, but Mickleover had come out positively and after 50 minutes Marsden had to clear off the line, before Greaves saw his header bounce off the cross bar.

After Hedge had easily dealt with a Marsden free kick, the Mickleover keeper was busy again, after saving Will Davies’ shot from a cross by Dunbar.

Just after the hour mark Dales got a cross in from the left, Osideko’s effort was just wide, with Beavon trying to connect too.

Warren had started to struggle after going over on his ankle and after 70 minutes he was replaced by Butler, and Wilson was pushed forward into midfield.

Leiston were pressing again however and four minutes later a Barnes cross put over the bar by the Mickleover defence, before Hedge punched the resulting corner clear.

Hutchings then headed wide from a Quantrell corner for the visitors, before Rose was tripped on the edge of the box. Wilson stepped up to take the free kick, beat the wall but his shot hit the bar with a slight deflection.

Adam Mills fired a late free kick straight at Hedge, but then there was one last chance for Mickleover. Greaves had a shot following a corner, then Wilson came in with the keeper intercepting with just inches to spare.

Despite having led, it was a good solid point against a strong team and now we look forward to Tuesday night’s Derbyshire Senior Cup game at Long Eaton, before we face Kings Langley at the Don Amott Arena next Saturday.