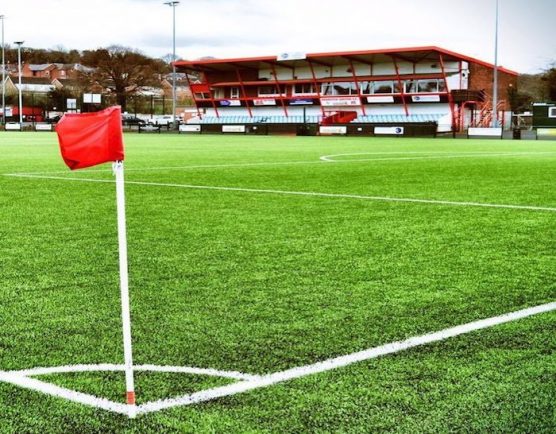 Unbeaten in the last six league games, but having led for over 70 minutes, Mickleover finally went down 1-2 at Redditch in their Southern Premier League Central visit to the Trico Stadium.

Mickleover had two players on yellow cards in the first 10 minutes with Dolan and Watt both in the book for fouls on Mensah, who went off injured seven minutes later.

Redditch went close after 24 minutes when debutant Sambu’s crossed for Hudson, whose final shot was deflected wide. Then after a series of corners Sheaf headed over for the hosts.

With Redditch’s early attacks failing to penetrate the Mickleover defence, a ball had cleared the home defence, fallen to Greaves, who then spotted keeper Boucher off his line and lobbed into the empty net, 1-0.

Hedge had to make a save from a Redditch effort  after 34 minutes, before Sports went close too with a header just passed the post following a corner.

But Hedge was in action thee minutes later, with a save from King, before Boothe’s final effort of the half was blocked and it remained 1-0.

Boothe and King combined again early into the second half, but Hedge came to the rescue after the defence was flat footed.

But Redditch were continuing to threaten, and after 51 minutes Flanagan put a ball over the defence for King to chase. Hedge came out but failed to collect and the defence then cleared the danger.

Yeomans was next in the referee’s book, before Redditch had another chance.  Boothe went one on one with Hedge, but the Mickleover keeper came out on top, before Boucher then saved at the other end from a Reeves shot.

Butler came on for Wilson after 71 minutes, but despite the continuing attacks from the hosts, the Mickleover defence continued to repel the danger.

Greaves then became Mickleover’s fourth yellow card, but the defence was finally breached after 79 minutes when Sheaf scored from the edge of the box. 1-1.

Scott then came on Dales after 80 minutes, just before Redditch sent a free kick just over the bar.

Disaster then struck for Mickleover, with a minute of normal time on the clock, Flanagan met the ball on the bounce and sent a 30 yard half volley to Hedge’s right 1-2.

Osideko came on for Beavon in injury time, but all three points went to Redditch, as they now move to fourth in the table and Mickleover drop to fifth.