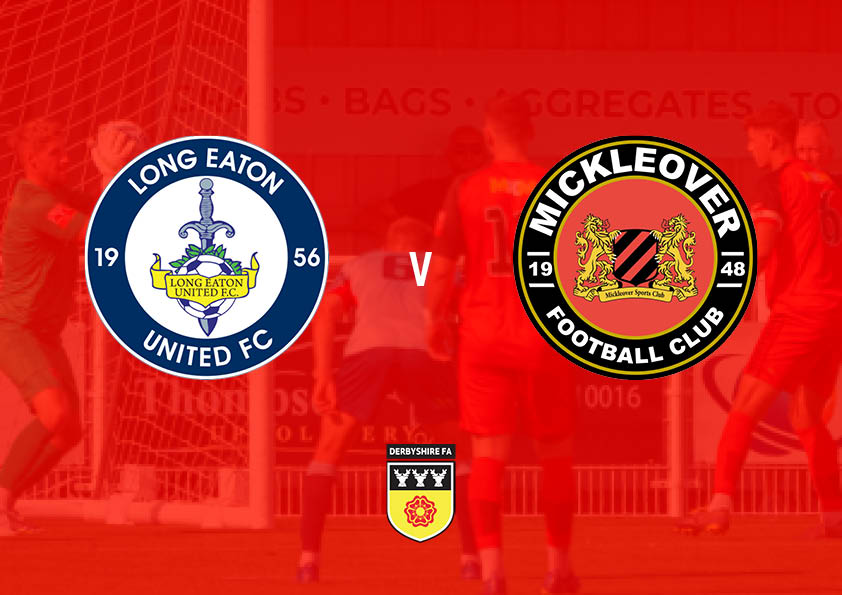 It could be a changed side for Sports following a few knocks in the match against Leiston last Saturday and an opportunity for some fringe players to get a start.

Long Eaton are currently eighth in the Northern Premier League Division One East, one step below Mickleover, following a 2-1 win at Stockton last Saturday.

Manager Ian Deakin is a former Forest and Mansfield goalkeeper, who is also Mansfield Town’s commercial manager. He played for Eastwood, Retford, Hinckley, Buxton and Heanor too.

Goalkeeper Sam Wilson is a former Mansfield Town Academy player, who is also the clubs goalkeeping coach. He has played for Wisbech too and has a reputation as a penalty saver.

Full back Larell King is well known to Mickleover after starting last season at the Don Amott Arena, captaining the reserves side. He was previously at Mansfield too, having started out at the Burton Albion Academy.

Sam Parker is a left back that began his career as a Derby County Junior. He was signed from Kimberley MW at the start of last season.

Midfielder Tom Marshall is in his second spell at the club. He left to join Ilkeston during the 2016/17 season. In three seasons he made over 100 appearances, before returning to Long Eaton early in 20/21.

Keiran Walker is a centre back in his third season at Grange Park, having learned his craft at Carlton Town. He recently made his 100th appearance.

Fellow centre back Luke Cox was a Sheffield Wednesday graduate, who joined Redditch on his release. He moved on to Chasetown in March this year and is one of the more recent signings. He has scored three goals in his 13 appearances so far.

Canadian born striker Micah Jebbison arrived prior to the 21/22 season. He was on trial at Sheffield Utd before joining Ilkeston and Quorn. His younger brothers are both footballers too,  Daniel plays for Sheffield Utd and Jonathan has played for Quorn and Heanor. He has scored four goals this season.

Striker Ben Hutchinson is probably one of the clubs most experienced player. His football league career started at Middlesbrough, after he joined them from Arnold Town. He then joined Celtic and was sent out on loan to Swindon Town, Dundee and Lincoln City before a permanent move to Kilmarnock.

He came back to the Midlands in 2012 with Mansfield, moving on to Nuneaton, Basford, Belper Town, Carlton, Newark and Eastwood, before joining our hosts at the start of last season and has played in the English and Scottish Premiership and the Champions League.

Tom Cursons is a recent signing from Gainsborough Trinity. A talented striker who has already scored four goals in four games and was a regular scorer at Gainsborough too.

Midfielder Jamie Walker came from Basford in 2020, back for a second spell at the club. He was a regular goalscorer during a spell at Ilkeston and has played at Eastwood and Carlton too. He scored 20 goals last season and already has six to his name this term.

Defensive midfielder Danny Gordon is another former Mickleover player. He came from Belper for the start of 20/21 season. As well as Sports, he has also played for Ilkeston and Heanor.

Tyreece Robinson is a former Rams junior who was at Mickleover until January 2020 when he moved to Gresley Rovers.  After six months he moved to Belper Town for a year and was then at Frickley before his arrival at Grange Park in June. He also had a short spell at Loughborough Dynamo.

Midfielder Jamie McGuire was a team mate of Jamie Vardy’s at Fleetwood Town. He started as a Junior with Tranmere Rovers and was loaned to Northwich, before joining Cammell on his release. He played for Droylsden before joining Fleetwood in 2009 and four years later moved to Mansfield Town, making over 130 league appearances.

Jack Rogers is another former Rams Academy player. A striker with six goals so far this season. He joined Ilkeston last August following his release and completed the season on an extended loan at Shepshed, before moving to Grange Park.

There is yet another Ex Mickleover player with Ben Gowing having recently arrived at our hosts. He came to Mickleover at the start of the 2020/21 season, having previously played for our junior side.

A former Dunkirk and Belper Town and Utd player, he came to us from Eastwood and left early last season. His first spell at Long Eaton was when he signed from Quorn in 2017 and he arrived back recently, after another spell at Quorn and Anstey Nomads.

Striker Alex Marshall is Tom’s elder brother and in his second spell at Long Eaton too. He left in 2017 to join Ilkeston and returned in February 2020, continuing his reputation as a prolific goalscorer. He once scored a 16 minute hattrick for Ilkeston at Loughborough.

When Rod Orlando-Young was signed in August, the attacking midfielder brought a vast career of experience with him. A former Exeter and Norwich City youngster, he was loaned to Bishop Stortford, before joining Welling Utd on his release.

He was then loaned to Grays, before a permanent move to Ware, but then headed north to Sheffield FC two years later. Newcastle Town, Ilkeston, Buxton, Gainsborough, Radcliffe and Grantham followed, before going to Frickley in January.

Jermaine Hollis is another experienced player, a former Jamaica Under 20 International, he spent much of his early career at Kidderminster, including a loan at Alvechurch, after being picked up from Eastwood.

He joined Hucknall Town following his release but rapidly moved on to Gresley Rovers, Rainworth, Eastwood, Carlton, Shepshed and Basford, before his first spell at Long Eaton in 2014/15.

Belper, Grantham, Coalville, Hednesford, Ilkeston, Newark Flowserve and Eastwood followed, before he came back to Long Eaton this year.

Brad Wilson is a full back who arrived pre-season 2019/20 and James Taylor is a midfielder, who has come through the clubs own youth scheme.

Riley Phillips has recently broken into the first team squad from the youth team, while Riece Bertram is the clubs newest signing. He has come from Basford, but has played for Matlock, Belper, Ilkeston and Carlton too.