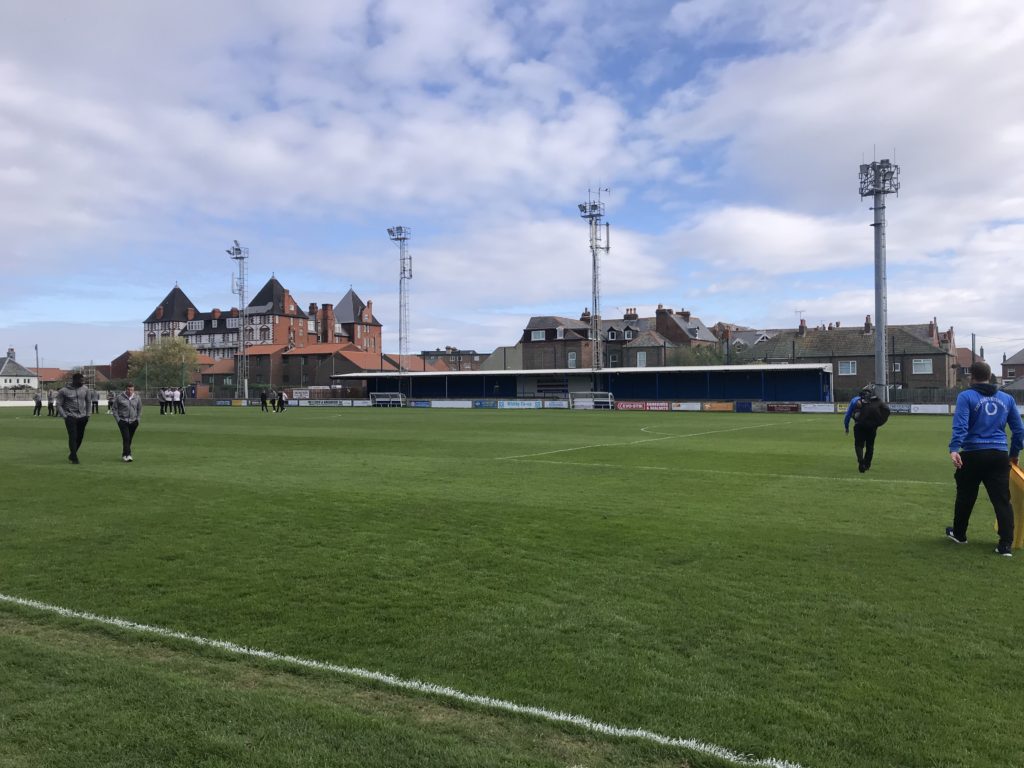 Mickleover travelled to The Turnbull Ground after a successful point at home against Matlock. John McGrath put out a 3-5-2 formation with Lewis King in goal, the back three consisted of Ben Turner, Pablo Mills and Reece Ford, the wing backs consisted of Mason Warren and Curtis Burrows with John McGrath, Oliver Roberts and Jimmy Phillips in the centre and the front two strikers consisted of Evan Garnett and Isa Marselia. On the bench were striker Nathan Jarman alongside the young trio of Harley Kozluk, Fin Larkin and Jack Walsh.

On the 6th minute, Whitby had a chance to get on the scoreboard but Monkhouse struck the ball over the bar. A minute later, Whitby were awarded a penalty after Ford brought down Mondal and Hopson scored in the bottom right corner of the goal to give the seasiders the lead. It took Whitby 21 minutes to score but once again struck the ball over the bar. It took Sports 29 minutes to get their chance of a goal from a corner that was awarded to Mickleover. A header from Garnett finds Isa Marselia but his effort was off target from a couple of yards off the goal line. Another corner was awarded for Sports and another miss as Pablo Mills headed the ball and was out wide of the right hand post. On the 37th minute, Whitby’s Mondal tried an overhead kick inside the box but was out wide of the left hand post. A ball from Sports Mason Warren inside the box caused danger for the Whitby defence and John McGrath headed the ball but went behind goal for a corner. During five minutes of added time due to lengthy injury stoppages, a big chance for Marselia as he won the ball but struck wide and Garnett missed a chance too. Half time, Whitby Town 1-0 Mickleover Sports.

The home side started off the brightest in the second half with Mondal looking dangerous and struck the ball. His low effort from the left hand side was saved by the gloves of Sports keeper Lewis King. On the 52nd minute, Whitby’s Maloney has a chance but is struck over the bar and Sports make a sub. Nathan Jarman came on for Isa Marselia. On the 56th minute, Hopson had struck the ball from a long distance and went wide of the right hand post. Good build up play from Sports came on the 65th minute and resulted in Jarman firing wide of the left hand post. A good ball came across for the hosts on the 67th minute which found Mondal but he could not get a touch on it. Another goal came for Whitby on the 68th minute with Hopson scoring in the bottom right corner and giving the hosts a comfortable lead. On the 70th minute, Burrows cross was met by a volley from Jarman which was deflected and out for a corner. It could have been three for the blues but Mondal struck the ball out wide of the left hand post. On the 76th minute, Jarman missed a strike from a few yards out and Garnett was flagged offside. It was a second yellow and a red card for blues Mondal on the 78th minute for descent. It took five minutes for the hosts to get back on the scoreboard as Daniel McWilliams was fed through by Hopson and struck the ball into the bottom right corner. Another change for Sports on the 84th minute as Jack Walsh came on for Jimmy Phillips. Another goal came for Whitby on the 88th minute from their substitute Sukar from a mix up with the Sports backline and tapped in on the line. Full time, Whitby Town 4-0 Mickleover Sports.