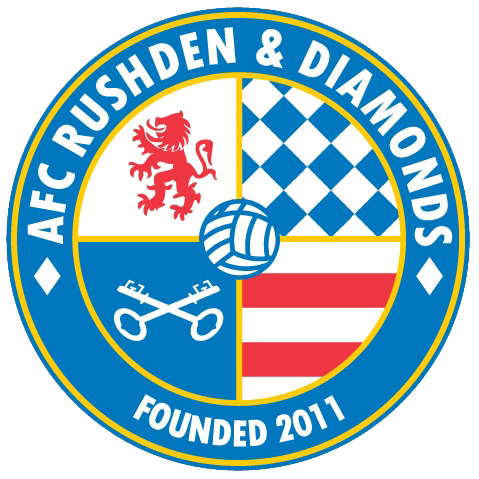 Probably the best known of our forthcoming opponents are Rushden & Diamonds. Originally formed in 1992 by the combination of Rushden Town and Irthlingborough Diamonds, they gained football league status after winning the 2000/2001 Conference title.

Having won the Third Division title in 2002/3, they were relegated the following year and in 2006 returned to the Conference. But after five more years they were expelled  and went into Administration, before reforming into the team we see now, as part of the United Counties League Division One.

They just missed out on last years play-offs, after finishing sixth in the Southern Premier League Central. Their Hayden Road ground has a capacity of 2,956 and has a grass pitch.

He has been manager at Rushden since February but started his managerial career with Sheffield Wednesday, Preston North End and Leeds Utd Women.

Assistant Chris Willmott is a local school teacher who played with Burgess at Oxford Utd, but also played league football for Luton and Wimbledon and has only recently joined the club.

There are no announcements from the team on the playing front so far.

Coalville Town will be one of our nearest neighbours and will be looking to continue the form that saw them third in the table last season.

Like Mickleover manager Andy Stevens has already announced four signings. Defender Elliot Putnam came in from Barwell last September on non-contact terms, but has now signed fully. He was also the scorer of last years goal of the season.

Striker Billy Kee is a former Northern Ireland Under 19 and 21 International and has recently extended his contract. A former Leicester City junior he played well over 450 games for Accrington Stanley, Torquay, Burton, Scunthorpe and Mansfield scoring 141 goals, before arriving at Coalville in February 2020. He scored 17 goals last season.

Midfielder Andi Thanoj has recently arrived from Boston Utd. Albanian born he was a Grimsby Town Junior, who also played for Alfreton, Harrogate and Redditch before arriving at Boston.

Stevens has also signed 6ft 4in Irish keeper Paul White from last years Champions Peterborough Sports. He started out at Cork City before moving to England with Forest Green Rovers. He had joined Peterborough last November from St Ives Town.

Founded in 1929 they have a grass pitch at their Owen Street ground, which can house 2,500 fans.

From one of the nearest to one of the furthest of our new opponents, Leiston are over 180 miles away near the Suffolk coast.

Last season they finished seventh and Darren Eadie has recently confirmed that keeper Sam Donkin, has re-signed, having joined the club back in November 2019 from Biggleswade and has recently signed brothers Rossi and Ryan Jarvis too.

Both former Norwich City players, defender Rossi was signed from Dereham Town and has also played for Torquay, Rotherham, Luton and Barnet, before three years at Lowestoft. He is an England Under 19 and C International.

Midfielder Ryan has played for England at Under 16,17 and 19 and came from Lowestoft too, his longer and varied career saw him make over 400 league appearances which included three years at  Leyton Orient, as well as spells at Colchester, Northampton, Kilmarnock, Notts County, Walsall, Torquay and York City.

Formed back in 1880 their Victory Road ground has a grass pitch and can hold a crowd of 2,350, and last season they finished seventh in the table.

Stratford Town not surprisingly are called the Bards. They were formed in 1941 and have a grass pitch at their Knights Lane ground, which has a 3,000 capacity.

Their current manager is former Derby striker Dean Holdsworth who scored almost 200 goals in over 600 appearances in a long career, with the likes of Watford, Brentford, Wimbledon, Bolton and Coventry. His assistant is Gavin Hurren, former Gresley Rovers manager.

They have re-signed centre back Jack Turner, who came from Kettering last year.

Kurtis Revan was winger from the clubs own Academy, after playing his junior football at Derby. He has now rejoined for this season after spells at Oadby, Leamington, King Lynn, Redditch and Rugby.

New signing Lucas Powell is a wing back or midfielder signed from Barwell, after starting out as Birmingham City Junior. He played at Gresley too under Gavin Hurren.

They were 13th last season so will be hoping for improvement.