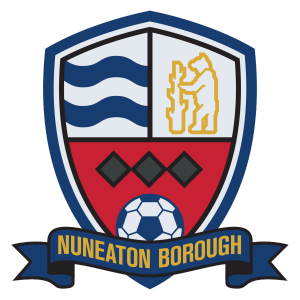 The origins of Nuneaton Borough go back to the late 1800’s. This will be their fourth season in the current league, following their relegation from National League North , having previously played in the Conference.

Their Liberty Way stadium holds 4,500 fans and is a grass pitch, but they finished a lowly 16th last season.

Manager Jimmy Ginnelly has been in charge since December 2018 and previously managed Barwell and Atherstone and has already been busy making a number of signings.

Striker Kane Richards has arrived from Basford, where he spent three years after joining them from Kidderminster. He started out as a Derby County junior.

Left back Jaden Charles is an ex Rams junior too, but has spent the last couple of years with Mansfield Town, though mainly out on loan. He was originally a loanee at Nuneaton too, but he has now moved permanently.

Ukraine born defender Chukwuemaka Beejer came from Belper in March last year and has now committed to another season with Nuneaton. He’s also played for Eastwood and Tamworth.

Midfielder Prince Mancinelli has arrived from Belper too, he played for Long Eaton, Radford and Basford.

Chris Lait is a striker or winger and has been signed from Halesowen, where he spent one year after arriving from Bromsgrove. He started off at Solihull but has played for a number of clubs in an 11 year career.

Cain Noble is another midfielder from Loughborough University, but he had spells at Hyde and Atherton previously.

Derby born Tyrell Waite is a third time returnee having signed from Coalville. He’s played for Ilkeston, Notts County, Kidderminster, Boston, Lincoln, Matlock and Tamworth too, as well as a spell in Sweden.

Striker Matty Stenson has been on Halifax’s books for the last two years, after starting out at Barwell. He has had numerous loan spells too.

Joe Magunda arrived in February from Stratford, but has recently signed a new contract. He was a Leicester City junior before plying his trade around the non-league clubs, which included six years at Brackley.

Skipper Scott McManus is another player to re-sign. The centre back was previously at Coalville, FC United, Crewe and Halifax and had a spell in Scotland with Stranraer.

Midfielder Ryan Beswick is another returnee, having come back from Tamworth. He started at Leicester City too, moving on via Redditch, Kings Lynn and Solihull.

St Ives Town, that’s the Cambridgeshire St Ives finished 14th last year, but have had a recent reshuffle in the coaching staff. Manager Ricky Marheineke has been in charge for eight years, but coach Jim Freeman is now his assistant, while former Welwyn boss Adam Fisher has joined as first team coach.

The clubs history goes back to 1887 and their home ground is at Westwood Road, with a 2,000 capacity and like Mickleover have a 3G pitch.

So far there haven’t been any announcements from the club about their squad for the forthcoming season.

Suffolk based Needham Market FC were 12th in last years Championship, but are another team yet to announce any of their squad for the forthcoming season.

Manager Kevin Horlock is an ex Northern Ireland international who spent the majority of his career at Manchester City, making over 200 appearances.

He finished his playing career at Needham Market and returned to the club in a coaching role, before taking charge in February 2020 after a spell as Chatham manager. He is also assistant manager of the Northern Ireland Under 21’s.

Stourbridge are jointly managed by former club centre backs Leon Broadhurst and Stuart Pierpoint. Broadhurst had spent most of playing career at the club, but had a couple of years at Bromsgrove.

Pierpoint started at Halesowen before his career took him via Stafford, Nuneaton, Solihull Moors, Leamington, Brackley and Coalville, before returning to Stourbridge last October.

They have recently announced three signings, with Midfielder Calum Gittings joining from Leamington, having spent five years with them since signing from Telford.

Joel Kettle is a centre back who has arrived from Bromsgrove, who he joined last summer from Nuneaton.

Finally young striker Harry Lewis is a product of their own youth scheme, and became part of the first-time squad last season.