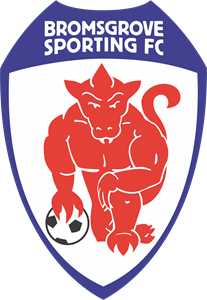 Bromsgrove Sporting are a fairly new team on the scene, having only formed in 2009 from the ashes of Bromsgrove Rovers.

They had a difficult season and finished down in 18th place, but have a new manager for this year. Thomas Baillie joined in May and will be facing his first public match in charge when they visit Gresley Rovers on Saturday. He previously manager Kettering and Stratford and was more recently at Tamworth.

They have already built up a sizeable squad with a number of re-signed players mixed with new signings.

Ryan Edmunds has been signed from Redditch, having previously played for Nuneaton and Coleshill.

Right back James Fry is an ex Birmingham City Junior who had been at Stratford for two years. He also had spells at Tamworth, Leamington and Kidderminster.

Defender Kieran Dawes is another former Birmingham City graduate who has arrived after eight months at Redditch. He’s played at Sutton Coldfield, Hednesford, Coleshill and Stafford too.

Striker Mike Taylor has returned for a second spell at the club, having previously played for them between 2019 and 2021. In between he has been at Stratford and Halesowen.

Andre Brown is another striker whose arrived from Hednesford. He was a Crewe Alexandra junior and played for Kidderminster and Telford following his release.

Midfielder Jack Newell is starting his second season with the club after signing from Barwell and was previously a Northampton Town junior.

Ollie Taylor was first choice keeper last season and has also re-signed, while number two Aaron Clayton will be in his second season too, having signed September last year after his release from Birmingham City.

Mike McGrath is a very experienced midfielder with 16 years experience behind him. He came to Bromsgrove in March having been without a club since leaving Kettering in July 2021. He previously played for Bromsgrove in 2018/19 and has played Irish League football for Sligo Rovers and Galway Utd in his earlier career.

Midfielder Jordan Goddard started out at Bristol Rovers, but came to Bromsgrove last December from Halesowen.

Defender Dominic Perkins was in the squad last season but has stayed on again, while fellow defender Lewis Wright is a new signing.

Home produced juniors Blake Kindred and David McQuaide are also expected to be part of the squad this year.

Their Victoria Ground has a grass pitch and holds 5,008 fans.

Hednesford Town have already played one game, losing to a Birmingham City XI 3-5. They were ninth in last years table and have retained most of their 21-22 squad.

Cameron Ebbutt was signed in February from Bromsgrove and was originally a Bristol Rovers junior, while fellow striker Riley O’Sullivan came from Coventry Utd in October, having previously been with Mansfield Town.

Winger Chay Tilt started with West Bromwich Albion and had a spell at QPR. He has been at Hednesford since September last year, joining from Redditch.

Martin Riley is an experienced centre back that arrived from Tamworth last December. He started out at Wolves, and lists Mansfield, Wrexham, Halifax and Alfreton among his previous clubs.

Joe Cuff is one of the new signings from Stafford Rangers, the winger was previously at Market Drayton.

Former Chelsea junior and England Under 21 International Leroy Lita has had a long and varied career. He played in the Premiership with Swansea City and had long spells at Bristol City, Reading, Middlesbrough, and joined Hednesford in March from Nuneaton, scoring a hattrick on his debut.

A number of the clubs Under 19’s are looking to break through this year too, with keeper Rhys Williams, Carter Lycett, Joe Morley, Numair Rasid and Romehl Sheraton.

Defender or midfielder Josh Webb has re-signed too and despite missing out on last season, Jed Davies has also re-signed.

Young defender Harry Manton is a new arrival from Birmingham City and winger Kyle Bennett, who signed from Telford in January has also signed for another term. Bennett is an ex Wolves junior.

They were formed back in 1880 and their Keys Park Stadium hols 6,039 and has a grass pitch.

14TH in last years table Redditch Utd have already started their pre-season campaign with a 6-1 win over Cradley Town.

Their squad has already been announced, with most of last years team having re-signed.

Striker Ryan Nesbitt is a new signing having arrived from Bedworth Utd. He started off at Solihull Moors and apart from a spell at Loughborough has spent his whole career in the West Midlands.

Winger Bernard Mensah has recently arrived from Gloucester City, but started out as a Watford Junior.

Skipper Jack Byrne was one of manager Matthew Clark’s first re-signings, having joined from Telford in November last year. The midfielder is another player having spent most of his time in the West Midlands, apart from a year at Brackley.

Midfielder Robbie Bunn has played for Halesowen and Bromsgrove before returning to Redditch at the end of last season for his third spell.

Aram Soleman is another midfielder who arrived last December from Hednesford. He was a West Bromwich Albion junior and had a very short spell with Matlock Town back in 2021.

Former Aston Villa goalkeeper Kieran Boucher was signed from Stratford in September 2020, but central midfielder Reece Flanagan is another one of the new signings having arrived from Hednesford, after spending his early career at Walsall.

Midfielder Theo Rowe started out at Stoke City, but came to Redditch in January via Banbury, while centre back Ryan Wollacott has played in the Welsh League with Aberystwyth before coming to Redditch from Stourport in July last year.

Calun Flanagan arrived in January from Halesowen, but the left back was originally an Aston Villa Junior and Lewis Hudson is a full back who came from Coventry Utd last July.

Kieren Donnelly is a full back too. The former Aston Villa Junior came in February from Coleshill.

Midfielder Kieran Day is another one of last seasons players staying on this term, as is striker midfielder Ryan Boothe