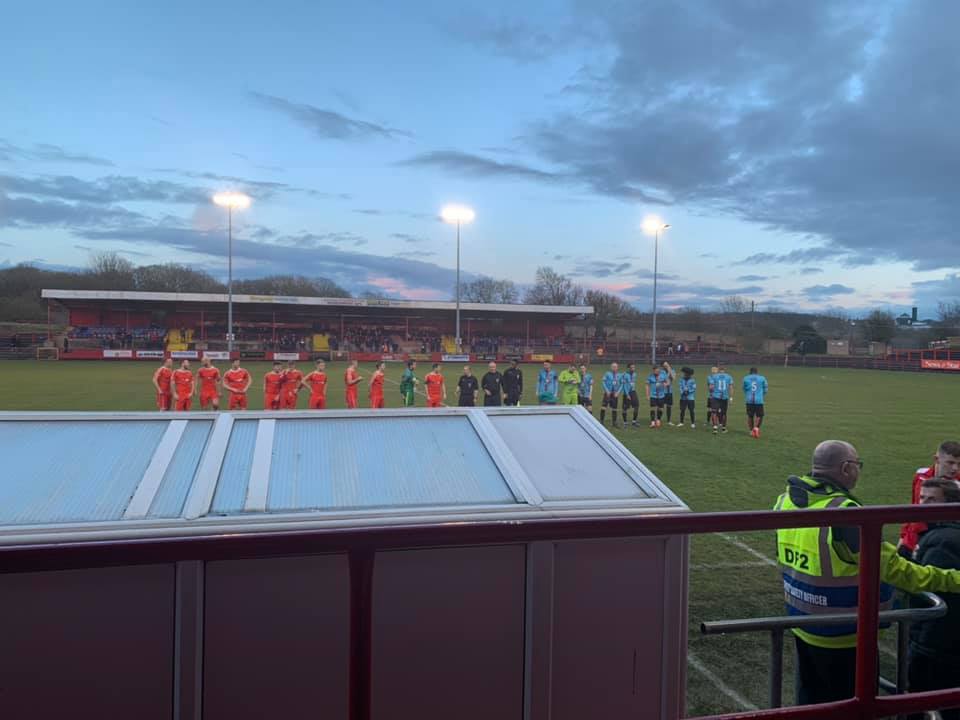 A massive night at the bottom of the Evo Stik Premier Division table saw Mickleover Sports come out on top with a crucial 1-0 away win, only their third of the entire season, to grab a much needed three points. A first half strike from new signing Jack Storer was all that separated the two relegation threatened sides but with both sides having further chances to score throughout the game, Lewis King produced an excellent display in between the sticks to come away with a clean sheet and a win that takes Sports level on points with Bamber Bridge, with the side from Preston to come on the final day, it could be a thrilling end to what has been a disappointing season to date.

John McGrath elected to put out a 4-4-2 with Lewi King in goal. A back four of Durrell Berry, Pablo Mills, Neil Yadolahi and Ben Turner. The midfield consisted of John McGrath himself and Jake Baxendale with Jack Storer and Mason Warren on the wings. Shaquille McDonald and Evan Garnett lead the line of attack for Mickleover Sports. On the bench were Will Norcross, Karel Tvaroh, Javaun Splatt, Jimmy Phillips and Ricky Ravenhill.

The first effort of an opening cagey affair fell the way of the hosts as Conor Tinnion sent a powerful header wide from a Gary Thompson cross to the left-hand side of the net. Tinnion then struck a powerful effort at goal a few minutes later which was well held by Lewis King down to the right-hand side and comfortably into his gloves. Workington then could have netted only a few minutes later as a mix up at the back from Sports gave Dave Symington a chance to pull the trigger on the right-hand side of the penalty area but the all was blasted miles over the bar after a rush if blood to the Reds winger.

Workington were having all the early chances and 25 minutes in a free kick was given away and as the ball came into the box Lewis King managed to catch after constant pressure from the Reds attacking line. King then set the counter attack away and Sports first real chance came when Shaquille McDonald sent an effort wide of the left-hand post from close range. After managing to withhold another Workington ball into the box Sports managed to take the lead with what would be the only goal of the game. Shaquille McDonald knocked the ball forward down to Mason Warren who then fed in Jack Storer down the right of the box. Storer then drove in and showed great composure to slide the ball under the advancing Taylor and into the bottom left corner. Sports did well to see off the expected Workington pressure with only one chance for the home side before the break coming through Symington, cutting inside and driving an effort that was expertly palmed away from Lewis King. That saw the sides into the half time break.

Into the second half and there was an early chance for the home side as Lewis King yet again had to keep out a strike from the lively winger Conor Tinnion at his near post. Sports then made their first chance of the game with Shaquille McDonald making way for a debut for on loan Derby County striker Javaun Splatt for his first taste of real men’s football. Workington would then have excellent chances to grab an equalizer with both Gary Thompson and midfielder Cowperwaite blasting efforts over Kings crossbar. Sports then had a golden chance themselves when goal scorer Jack Storer was played in 1v1 in the center of the box but the Workington keeper Taylor came out very quick and blocked the shot and away from danger. Next a great counter attack starting with John McGrath and Mason Warren saw Splatt dummy the ball through to Evan Garnett on the far side of the box, but his strike was saved by Taylor at the near post for a corner.

Sports second change was an enforced one as Durrell Berry picked a knock up in a challenge and was replaced by Czech student Karel Tvaroh at right back. Sports final two chances came as the game ticked into the last 10 minutes was Jack Storer and Mason Warren both having chances to strike at goal, but nothing came of either opportunity. The final chance of the game of any real note fell to right back Douglas got onto the end of a free kick towards the far post but his header was down into Kings hands at edge of the post. Workington did have a chance to score from a free kick into five minutes of injury time but the ball was blazed over the bar.

That was the last of the action as the referee blew his whistle a minute or so later to signal wild celebrations from the small travelling contingent who had made the five-hour trip up with the players. A crucial win over a fellow relegation rival gives Sports renewed hope that they can survive the drop going into the final six games and make the well over 200-mile journey home go a lot quicker!