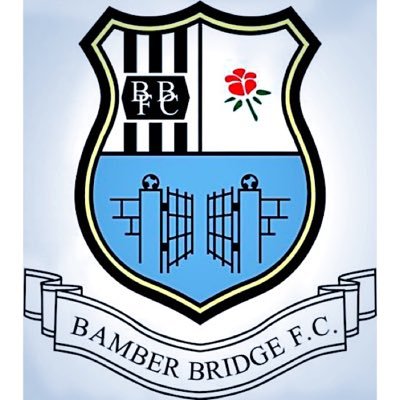 Club History:
A Bamber Bridge club played in the late 19th century, but the modern club was established in 1952. The new club joined the Preston & District League, progressing to the Senior Division. In 1974 they merged with Walton-le-Dale, continuing in the Preston & District League. They went on to win the league’s Guildhall Cup in 1978–79, before completing a Premier Division and cup double in 1980–81. After winning the Lancashire FA Amateur Shield in 1981–82 and another Guildhall Cup win in 1984–85, they won back-to-back Premier Division titles in the next two seasons, before winning a league and cup double in 1989–90.

In 1994–95, a second-place finish saw Bamber Bridge promoted to the Premier Division, with the club also winning the league’s Challenge Cup in their first season in the league and victory in the final of the Lancashire FA Challenge Trophy. The following season they won the Premier Division, which would have usually resulted in promotion to the Football Conference. However, Irongate was not deemed up to standard for the fifth tier, and the club remained in the Northern Premier League.

In 1999–2000 Bamber Bridge reached the first round of the FA Cup for the first time. After beating St Albans City 2–0, they lost 1–0 at Cambridge United in the second round. The club remained in the Premier Division until the end of the 2001–02 season, in which they finished bottom; although they beat Radcliffe Borough 3–2 in the promotion/relegation play-off semi-final, they were beaten 2–1 by Ashton United in the final.

Although Bamber Bridge returned to the Premier Division as a result of league restructuring following the creation of the Conference North and South, their stay was short-lived as they were relegated to Division One at the end of the 2004–05 season. However, the season did see them win the President’s Cup. When the league added a third division in 2007, the club were placed in Division One North.

A fourth-place finish in 2013–14 saw Bamber Bridge qualify for the promotion play-offs. After beating Warrington Town 1–0 in the semi-finals, they lost 3–2 to Ramsbottom United in the final. In the following season they finished third, again qualifying for the play-offs, this time losing 2–0 to Darlington 1883 in the final after beating Northwich Victoria 2–1 in the semi-final. A fourth-place finish in 2017–18 saw the club reach the play-offs, in which they defeated Tadcaster Albion 2–1 in the semi-finals and Prescot Cables 1–0 in the final to earn promotion to the Premier Division.