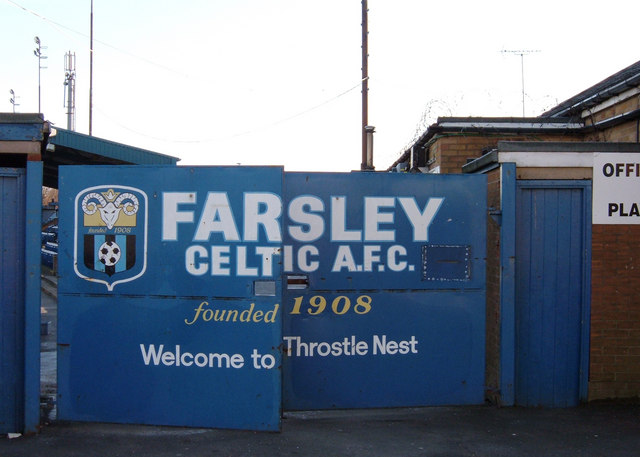 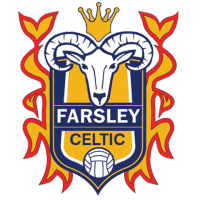 The club was established in 1908 as Farsley Football Club and played in amateur leagues in Leeds. They joined the West Riding County Amateur League in 1926 and were runners-up in 1936–37. In 1949 they joined Division Two of the Yorkshire League. They won the Division in 1951–52, earning promotion to Division One. After three bottom-half finishes, league performances improved and Farsley finished fifth in 1955–56 and fourth in 1956–57, before ending the season as runners-up in both 1957–58 and 1958–59. The 1959–60 season saw them with the league for the first time, and throughout the 1960s the club finished in the top seven of the league.

The club remained in the division for seventeen seasons until a third-place finish in 2003–04 saw them promoted to the Premier Division. Their first season in the Premier Division ended in controversy; Spennymoor United failed to fulfil their fixtures as they folded and the league opted to expunge their results, leaving Farsley ending the season as league champions. However, the Football Association over-ruled the league, awarding three points to all clubs who had not played Spennymoor at the time they had stopped playing. This meant that both Hyde United and Workington moved above Farsley in the table, with Hyde gaining automatic promotion. Farsley attempted to overturn the decision in the High Court, but were unsuccessful and subsequently entered the play-offs. After beating Whitby Town 1–0 in the semi-finals, they lost to Workington on penalties in the final.

In 2005–06 Farsley finished fourth in the Premier Division, again qualifying for the play-offs. After beating Marine 1–0 in the semi-finals, they defeated North Ferriby United 2–1 in the final to earn promotion to the Conference North. A second successive promotion was achieved the following season when a fifth-place finish in the Conference North saw them again qualify for the playoffs. They went on to beat Kettering Town 4–2 on aggregate in the semi-finals, before beating Hinckley United 4–3 in the final at the Pirelli Stadium. They also reached the first round of the FA Cup again, eventually losing 2–0 in a replay to Milton Keynes Dons after the home match had ended 0–0.