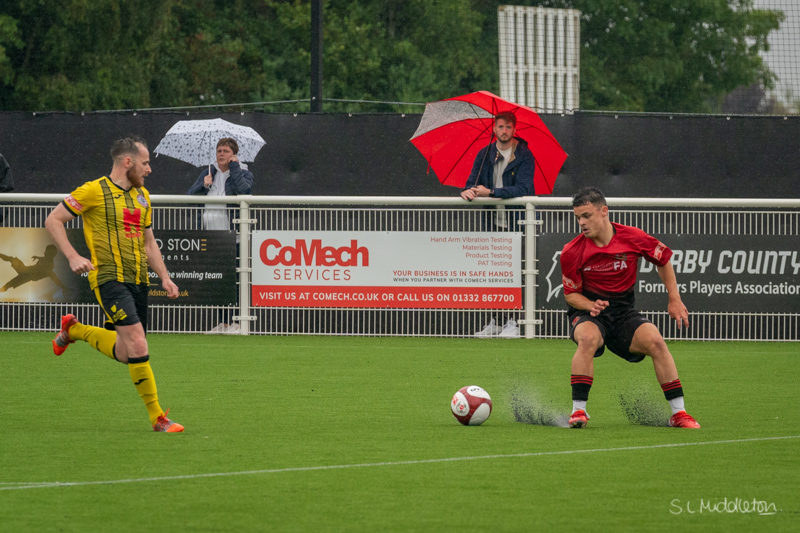 With Lancaster City away and Hyde Utd at home, Mickleover have a busy Bank Holiday weekend ahead.

Lancaster started the season with a defeat at Whitby, but since then have had wins away at Witton and Grantham and home win against Stalybridge.

Striker Sam Fishburn and midfielder Paul Dawson both hit hattricks in the 7-2 win at Grantham, Fishburn’s tally now having reached six. Teenager Fishburn is currently on loan from Carlisle Utd

Dawson started at Morecambe Academy and came to Lancaster in January from Bamber Bridge.

Keeper Matthew Alexander played League One football at Bolton, having started out at the Newcastle Academy. He is currently on loan from Bolton.

Midfielder Charlie Bailey was signed from Kendal Town after starting at Morecambe, while Bailey No2 Sam, was a product of Bolton Academy. A central midfielder or wing back, he came from Kendal too.

Christian Sloan is one of Lancaster’s new signings. A midfielder who has played at Barrow and Kendal. Similarly Ed Elewa-Ikpakwu is a new singing too, the midfielder having come from Leicester City.

Defender Liam Brockbank is a new signing too. He has come from Workington, having previously been at Carlisle for nine years.

Centre back Glenn Steel  is one of the longer serving players, he came from Bamber Bridge in 2017, having moved there for his second spell from Lancaster in 2014.he has also played for Fylde.

Lewis Fensome is a wing back who originally came to Lancaster on loan in 2018, before his move from Preston became permanent.

Also in central defence is Andrew Teague, a former Macclesfield junior in his second spell at Lancaster. He had loans at Tamworth and Hyde, joining Lancaster from Leigh Genesis in 2009. He moved on to Chorley before returning to Lancaster in January last year.

Striker Rhys Turner was a Preston junior, but played league football at Stockport, Oldham, York, Macclesfield and Morecambe and has come to Lancaster from Barrow.

Midfielder Simon Wills is probably the longest serving player, having signed from Kendal Town in 2012.

On Monday it’s the turn of the currently managerless Hyde Utd to visit the Don Amott Arena for our third home game of the season.

They have had a tough start to the season, having taking their first points last Tuesday with a win against Grantham, after three straight defeats. They are due to play FC United before coming to Mickleover.

Goalkeeper Joe Green started out at Sheffield United, but then he had the opportunity to play for a college in New York for Monroe Mustangs.  On his return to the UK he had trials at Barnsley and Chesterfield and eventually signed for Newport County as cover for first choice Goalkeeper Joe Day, before finally moving to Guiseley, where he spent a couple of seasons playing in the Conference. He also had a loan spell at Gainsborough Trinity. Better known to the Mickleover fans as “shiny boots.”

Defender Bradley Roscoe started his youth career at Preston North End before moving to Fleetwood Town in 2015. He went on loan to AFC Fylde too, and had spells at Ramsbottom United and Glossop North End before joining Buxton, from where he came to Hyde in November 2019.

Kyle Brownhill has travelled in his football career but keeps coming back to Hyde. The defender started at Stockport, before Burnley spotted him. After a loan at Workington he first came to Hyde in 2014, then had various loans, which included returns to Hyde. He came back permanently in December 2017 from Ramsbottom.

Jordan Fagbole came from FC United for the 2018/19 season, having started out as a Rochdale Academy player. He’s played for Stockport, Colwyn Bay and Solihull Moors, but the tough defender missed last season with a ruptured Achilles tendon.

A former Port Vale youth player, defender Tom Morris spent most of his career around the Potteries, with Stafford Rangers and Kidsgrove, but isn’t a regular starter at present.

Cameron Fogarty is the latest of Hyde’s home grown talents. The midfielder has now become a first choice player for the starting 11.

Midfielder Liam Tongue is in his third season at Hyde. He came from Stockport Georgians, arriving via Cheadle, Marine and Stalybridge. He is a regular goal scorer too.

Kingsley James is another midfielder and a Sheffield Utd graduate. He made one first team appearance before playing in League Two with Port Vale. Further moves took him to Chasetown, Chester, Herford, Halifax, Macclesfield, Guiseley and Gainsborough, joining Hyde in June 2020 and was capped by England C.

Central midfielder Chinedu Uche was an Oldham Junior until October 2019 when he joined Glossop NE.  He arrived at Hyde for the start of last season.

Irish winger Jonan Mitchell played for Ards and the Annagh and Queens Universities before coming to England and is new to Hyde this season.

Leading the strike force is Liam Hardy, who came from Grantham last December. He started at Armthorpe before moving to Harrogate. He’s also played for Darlington and Buxton.

Captain Tom Pratt is another striker, originally a pro at Bury. He played at Mossley, Ashton and Trafford before joining Hyde in 2017/18. Now starting his fifth season at the club.

Theo Bailey-Jones is getting back into football after an ACL injury. He started out at Wrexham, moving to Colwyn, Macclesfield, Stalybridge, Altrincham and Stafford. He came to Hyde last summer.

Jack Sherratt was another summer 2020 signing. The midfielder was at Kidsgrove before joining Leyton Orient, then played at KW Utd in Canada, before joining Northwich and back to Kidsgrove. He came to Hyde from Stafford Rangers.

Midfielder Harry Benns early youth career was at Manchester City. He then moved to Port Vale and had loans at Kidsgrove and Stafford before joining Hyde in 2019.

Finally Nyle Blake, a striker came in from Frickley Athletic. He started out at Mansfield as a youth, and also played for Alfreton.