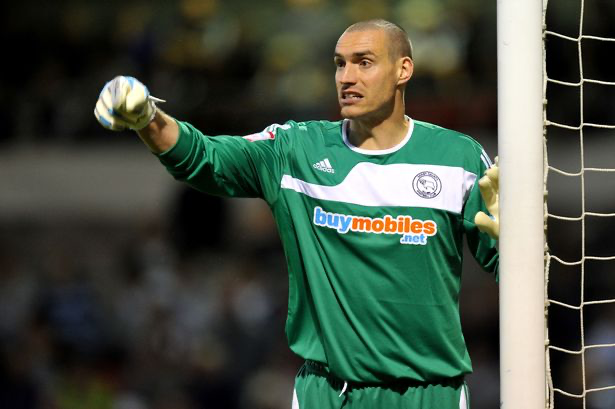 71 consecutive games in a Derby County shirt were one of the highlights of Stephen Bywater’s career.

Having started off in the Rochdale youth scheme, he was quickly spotted by Harry Redknapp, who took the 16 year old goalkeeper to West Ham after only one senior appearance.

There was immediate success for him at Upton Park, winning the 1998 Youth Cup.

His continuing development didn’t however earn him a regular first team spot after debuting in 1999 when Shaka Hislop broke his leg.

Although he stayed for almost eight years, it was only in 2004/5 where he held his place with 39 starts.

He went out on loan to Wycombe Wanders, Wolves, Cardiff, Coventry and Derby, until the emergency loan at Derby became permanent in 2006 for a £225,000 fee, after 68 games for the Hammers.

At Derby he was part of the play-off team that beat West Bromwich Albion to regain Premiership status and was first choice for a number of seasons.

Only injury stopped his 71 game consecutive run, but he played over 150 games in a Rams shirt.

After falling out of favour he was loaned to Ipswich, Cardiff and Sheffield Wednesday, joined the latter on a permanent basis in 2012, after five years with the Rams.

He spent a season at Hillsborough, before stays at Millwall, Gillingham, Doncaster Rovers and Kerala Blasters in India finally brought him to Burton Albion in 2016, where he is still on the books.

He had played in three play-off finals, two for West Ham and one for Derby and was a League One runner up with Sheffield Wednesday, as well as playing for England at under 19 and 21 levels.