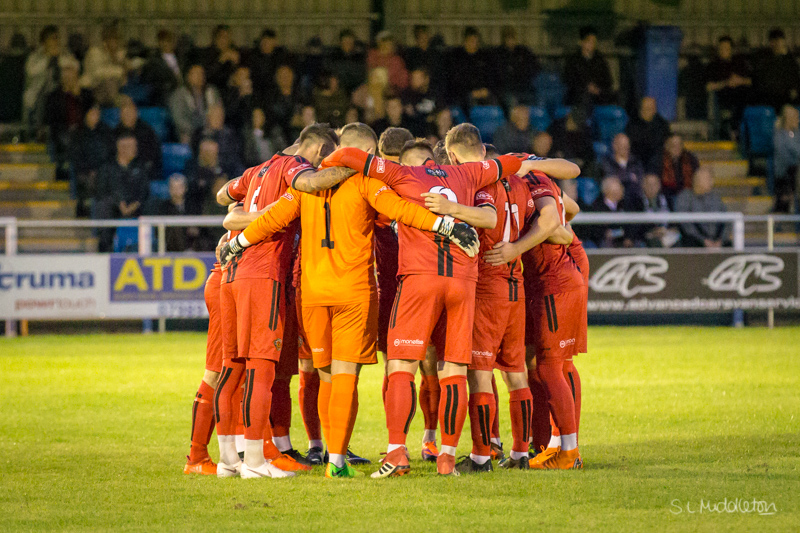 Sports will be looking to take their recent cup form into league action on Tuesday night as they take on league new comers Scarborough Athletic. With Sports scoring 10 goals in the last two cup matches, John McGrath will want to see his side take this form into what will be a very tough league match with the opponents sitting in the play off places going into the game. With Sports sitting 17th with only 2 league wins to date so far, its important to start picking up more victories and points to pull away from the danger zone and further up the table.

LAST TIME OUT
Our visitors tonight were in League action on Saturday as they were knocked out of the FA Cup in the 1st Qualifying Round by Marine. The Seadogs travelled North Ferriby United and moved up to third in the table with a 3-1 victory. Goals from Michael Coulson and James Walshaw turned the game around after Jordan Harrison put Ferriby ahead. This means Scarborough have lost only once in the league all season. Sports however were scoring for fun in Leicester as they booked their place in the 3rd Qualifying Round of the FA Cup with a 7-1 demolition of Step 6 side Anstey Nomads. Isai Marselia, Nathan Jarman, Oliver Roberts and Jimmy Phillips all netting in the game, with Marselia bagging an FA Cup hatrick.

SPORTS TEAM NEWS
With Pablo Mills returning to the fold last Saturday at Anstey, the defender is expected to be involved again tonight after recovering from a shoulder injury. Weather he starts or is on the bench again remains to be seen but still very positive news to have Mills back regardless. Niall Doran is definitely out with the availability of the other injured player Kevin Grocott unknown. Everybody else is presumed fit and available for selection.

GOING TO THE GAME?
The game is a 7:45pm Kick Off at the Don Amott Arena on Station Road, Mickleover, DE3 9FB with Admission Prices set at £10 Adults, £7 Concessions £2 10-16’s with Under 10’s FREE with a playing adult. Derby County Season Ticket Holders are being encouraged to come along to support their local non league side with reduced admission of £7 on production of their club’s season ticket at the turnstile. The bar and snack van will be open as usual serving hot and cold drinks and food before during and after the match. Your new look Sports Report Match day Programme will also be on sale at the turnstile for only £2! This features the thoughts of Chairman Don Amott and Manager John McGrath plus all your usual content.

NOT GOING TO THE GAME?
WE’RE BACK! Then no need to worry. After two back to back weekends of weddings, Press & Media Officers Sam & Kerry Goldsworthy are back and will be at the game keeping you up to date via the usual platforms of Twitter & Facebook. We also have the return of match reaction on Mickleover Sports TV (Youtube) after the game!