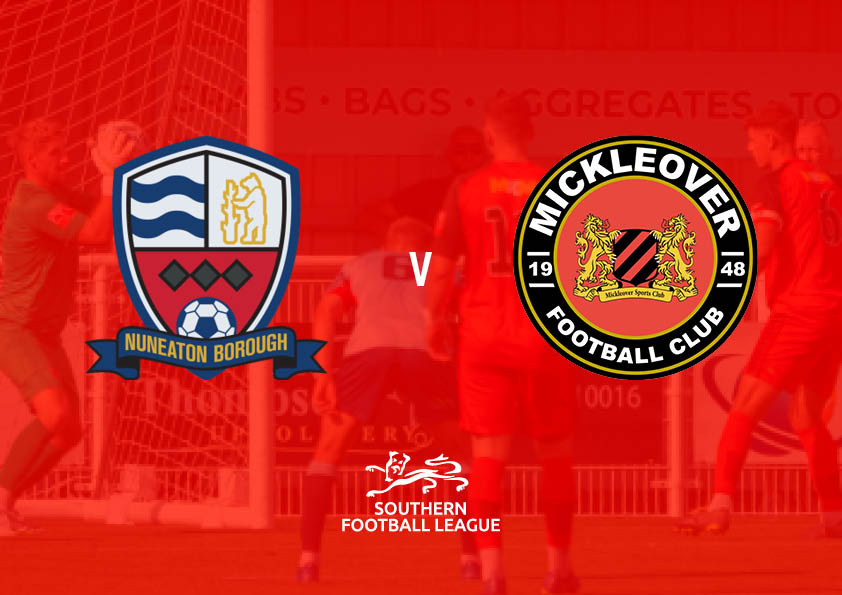 Mickleover FC are in for a tough challenge as they end 2022, facing second in the Southern Premier League Table Nuneaton Borough at Liberty Way.

Unbeaten at home so far this season, Jimmy Ginnelly’s team beat Leiston at home last time out 2-1, but suffered one of only four league defeats at the beginning of December, 1-3 at Barwell Town.

Ginnelly has managed to keep changes in his line-up to the minimum and has been in charge at Liberty Way for the last four years, having previously managed Barwell and Atherstone.

Keeper Tony Breeden recently made his 100th appearance for the club, having arrived from Bromsgrove in November 2019. He’s previously played for Leamington, Kidderminster and Tamworth.

Ryan Beswick is a midfielder who started as a Leicester City Junior. After a loan at Redditch, he went to Kettering following his release, before moving to Solihull. He then came to Nuneaton in July 2017, but after one year moved to Tamworth, staying for four years until returning to Liberty Way pre-season.

Aaron Forde is another midfielder, who started out at Walsall. He has spent his career based in the West Midlands, with Romulus, Bedworth, Halesowen, Sutton Coldfield, Rushall and Stourbridge before spending 2 ½ years at Tamworth, prior to joining Nuneaton in February.

Derby born Tyrell Waite is a striker that started out at Ilkeston. Notts County then picked him up in 2012, from when he had his first loan spell at Nuneaton, further loans back at Nuneaton and Ilkeston then preceded a permanent move to Lincoln City and he made nine league appearances before joining Skelleftea in Sweden.

He then came back to the UK with Nuneaton in January 2016, but moved on to Kidderminster, Boston Utd, Matlock and Tamworth, before his third spell at Nuneaton came in July, after eight months at Coalville.

Centre back Scott McManus is the current club captain. He was at Curzon Ashton initially, before joining Crewe Alexandra and making a handful of league appearances. He then had a year at Stranraer, before joining FC United and had seven years at Halifax Town. He came to Nuneaton in December 2020, after a couple of seasons at Coalville.

Luke Benbow is a long-serving striker who was signed from Stourbridge in July 2019. He started off at Solihull Moors and has spent most of his career alternating between Stourbridge and Solihull, interspersed with a short stay at Redditch and one season at Hednesford. He scored in both of their last two matches.

Midfielder Charlie Dowd was a Burton Albion youngster. On his release he spent three-years at Bromsgrove, before joining Alvechurch in July last year. He signed for Nuneaton January and like Benbow, also scoring in the last two matches.

Kane Richards is another Derby born striker, who came from the Derby County Academy. After a loan at Ilkeston, he signed for Matlock on his release, moving onto Chester, with a loan at Gainsborough, before joining Dover Athletic, who loaned him to Telford, before a permanent move to Kidderminster. He then spent three-years at Basford before coming to Nuneaton in July.

Centre back Lathaniel Rowe-Turner is an ex-League One and Two player who started at Leicester City. He was loaned to Cheltenham, Redditch and Kings Lynn before a permanent move to Torquay. Two years later he moved to Luton and after an initial loan, moved on to Alfreton Town.

He then joined Kidderminster and was loaned to Nuneaton in January 2016. A return spell at Torquay was followed by spells at Chester, Kettering and Tamworth, before spending a year at Stourbridge prior to his Nuneaton signing in July.

Isaiah Osbourne was an England Under 16 International, who played his junior football with Derby County, until Aston Villa spotted him. The midfielder made 30 starts mostly in the Premiership and was also loaned to Nottingham Forest, Middlesbrough and Sheffield Wednesday. He moved to the Scottish Premiership in 2011 with Hibernian, but after 30 appearances he headed south to Blackpool.

Scunthorpe, Walsall and Forest Green followed, but after almost 300 senior games, he went non-league for the first time with Nuneaton.

Right back Chris Cox was a pre-season signing from Tamworth. He started at Coventry Utd, before moving to Stratford and Tamworth. But after a year break, he was briefly back at Coventry, before almost two years back at Tamworth too.

Midfielder Max Brogan had scored five goals for Barwell this season, before coming to Nuneaton at the end of October. He was previously at Coleshill Town last season and had a spell at Tamworth too.

Former Coventry City junior striker Matty Stenson joined Barwell on his release. He moved on fairly quickly to Leamington, before spending a year with Solihull Moors. He was loaned to Telford before a permanent move to Halifax, but was loaned again to Tamworth and Kidderminster, before joining Nuneaton pre-season after spending two years on Halifax’s books.

Midfielder Rev James is a former Oxford Utd junior, who was loaned to Basford, before joining Tamworth on his release. After three years he returned to Basford, but was initially loaned to Nuneaton in March, before a permanent move in July.

Joe Magunda is another Leicester City graduate, who joined Woking on his release. A loan at Redditch followed before he went to Kings Lynn. He then spent two years at Brackley and six years at Leamington, before a three-year stop at Tamworth. Six months at Stratford preceded his move to Nuneaton.

Reserve keeper Liam Castle was another pre-season signing from Barwell, where he spent almost 10 years since arriving from Basingstoke.

Dan Edmonds has come through Boro’s own youth scheme and made his first team debut in the Birmingham Senior Cup a couple of weeks ago.

Hopefully the weather will be kind over Christmas, so the game goes ahead on the grass pitch. Kick-off at Liberty Way is 3pm.