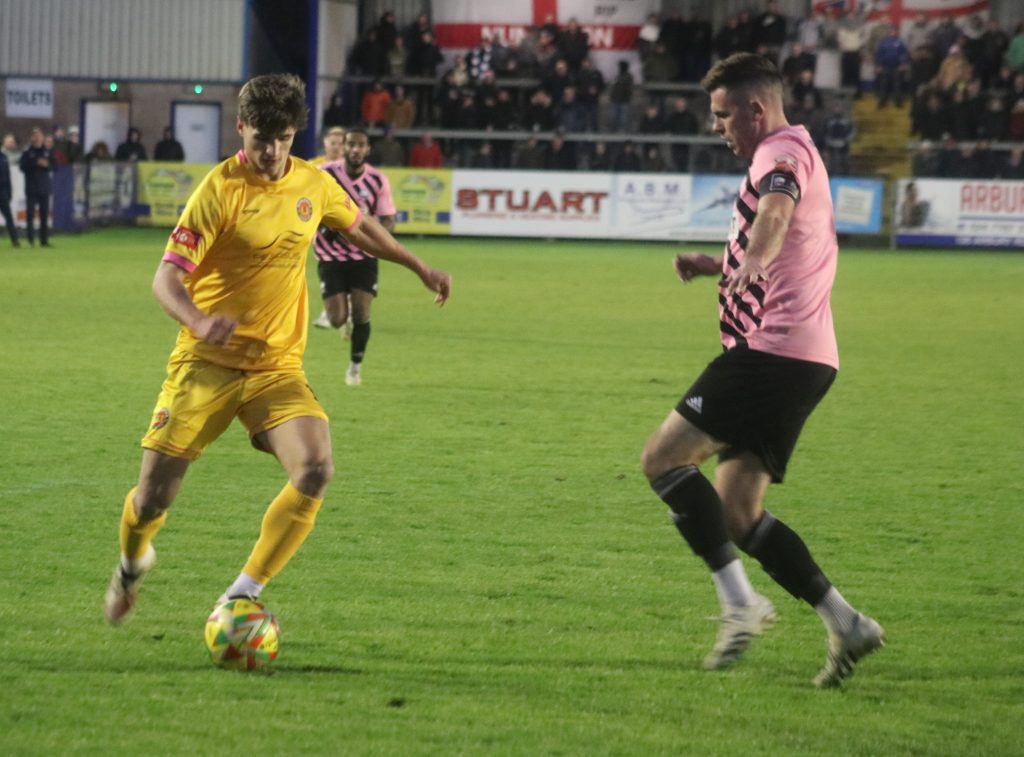 It was always going to be a tough game as Mickleover faced title contenders Nuneaton Borough at Liberty Way on Boxing Day, but unfortunately some poor refereeing once again played a major part in the outcome.

Barely had the game got underway when Scott had to have treatment for a right arm injury. But it was Mickleover on the attack first when Dolan got a break on the left, after a midfield interception, but Trueman’s weak shot failed to test Breeden in the host’s goal.

Nuneaton almost broke through the Mickleover defence after six minutes and four minutes later they had a free kick when Rose was alleged to have fouled.

Hedge’s clearance then found Beavon, whose shot was saved, before Beavon was in the action again finding Trueman in the middle after 14 minutes, only for his shot to be deflected.

The referee had started to give a number of free kicks for legitimate challengers, but the hosts failed to maximise their bonus opportunities, with McManus’ wild shot finally ending a few minutes of pressure on the Mickleover goal, as Butler and Watt stood firm in the middle of the Mickleover defence.

Overall, the play remained fairly even, when the referee allowed the game to flow. But in the 21st minute there was a chance for Dales. Dolan crossed from the left and it almost fell for a first-time volley from Dales. But a late bobble caused a miscue, and it was a goal kick.

Yet another free-kick soon followed but Beswick’s effort was well off target and then Dales was tripped on the edge of the box, but Wilson’s free-kick sailed over the bar.

After another Nuneaton free-kick the hosts fired in four different shots as they tried to batter the Mickleover defence, before Beswick’s final attempt was so wide it went out for a throw in.

Warren put a telling ball into the box on the half hour, but there was no one to receive, then Waite had a great chance for Nuneaton, in space, but his haste sent his shot well wide of the mark.

A 50/50 tackle just outside the box from Rose was then given in Nuneaton’s favour and brought the first yellow card. But it got worse when Benbow’s free kick that initially looked to be covered by Hedge, bounced and went just inside his left-hand post, 0-1 after 35 minutes.

The goal had come against the run of play but only three minutes later Dales went close having cut in from the right, to shoot just over.

Mickleover continued to push forward but had to be wary of the break. Dales again cut in from the right and almost found Trueman, but the keeper just managed to intercept. Then in time added on Dolan crossed from the left, but Rose’s chip then went out of play, so Sports were very unlucky to go into the break a goal down.

Reeves came on for Dales at the start of the second half, as the midfielder had only come through a late pre-match fitness test.

It was a strong start though and they continued to push for an equaliser, with Reeves making an immediate impact. Scott had crossed from the right to find the striker, but his shot rolled agonisingly just beyond the right-hand post with the keeper beaten and Dolan just inches away after 50 minutes.

Two minutes later Trueman had a shot down the middle which went just wide as Sports continued to dominate. Then another effort by the Sheffield Wednesday loanee was cleared off the line for a corner, with the keeper beaten again.

Warren tried his luck following the corner, but it was over the bar, before once again against the run of play, Dowd made a virtually unchallenged run across the Mickleover box from right to left, to fire home a second goal for the hosts, 0-2 after 58 minutes.

It wasn’t quite the killer blow to Mickleover’s hopes as seven minutes later Benbow scored his second and Nuneaton’s third, as the hosts took charge.

Trueman made a run down the right after 67 minutes and found Reeves again, but his attempt as before rolled out just beyond the left-hand post, but it was the referee’s decision a minute later that became the main talking point.

There was a tussle between Lathaniel Rowe-Turner and Warren, where the Nuneaton player appeared to have hold of Warren around his neck. As a number of other players arrived on the scene, the referee decided to red card Warren, while his assailant was given a yellow!!

The decision was reminiscent of George Nunn’s sending off against Bromsgrove, where the referee also failed to apportion fair and even punishment.

So, 22 minutes left and Mickleover were down tom10 men and Greaves came on for Dolan, just before Beavon had a shot over the bar.

But there was some light after 78 minutes, when Reeves broke free down the middle and chipped the keeper to make it 1-3. Bateman then came on for Trueman, but Richards restored the hosts three goal advantage in the 82nd minute. 1-4.

Reeves then battled his way through for a second with pure determination, to make the final score 2-4, in a solid all-round performance in a game marred by poor officials. 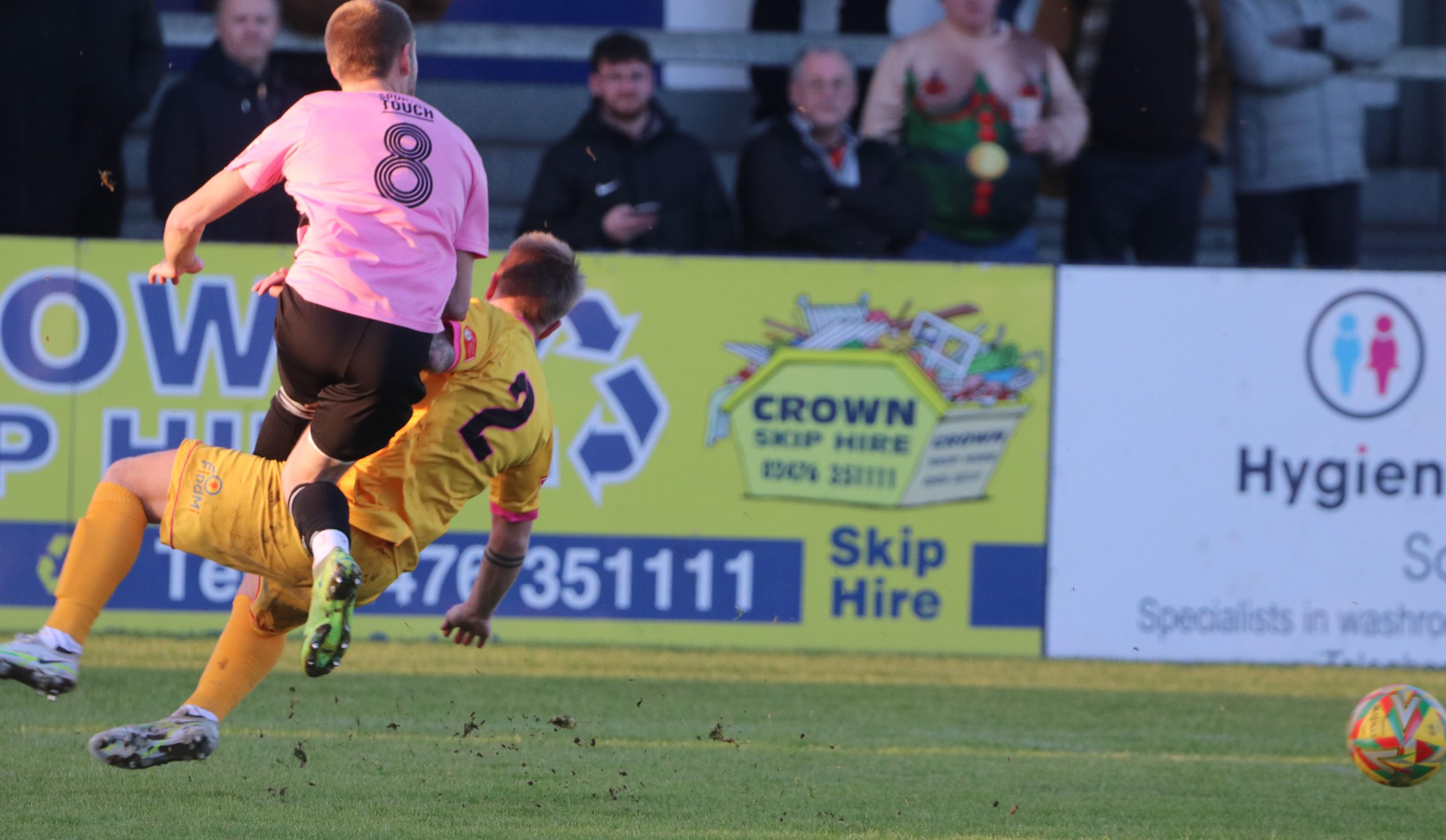 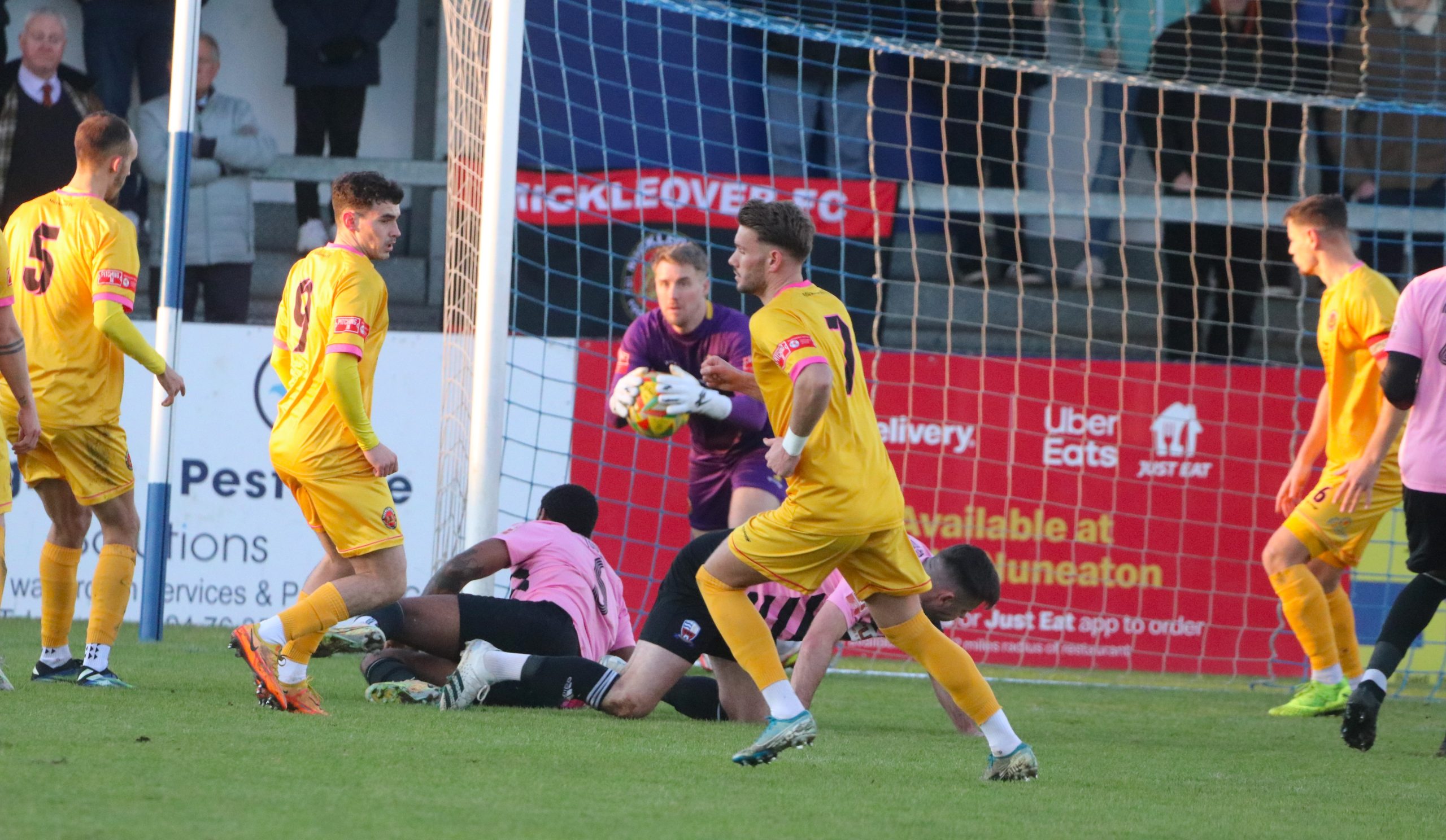