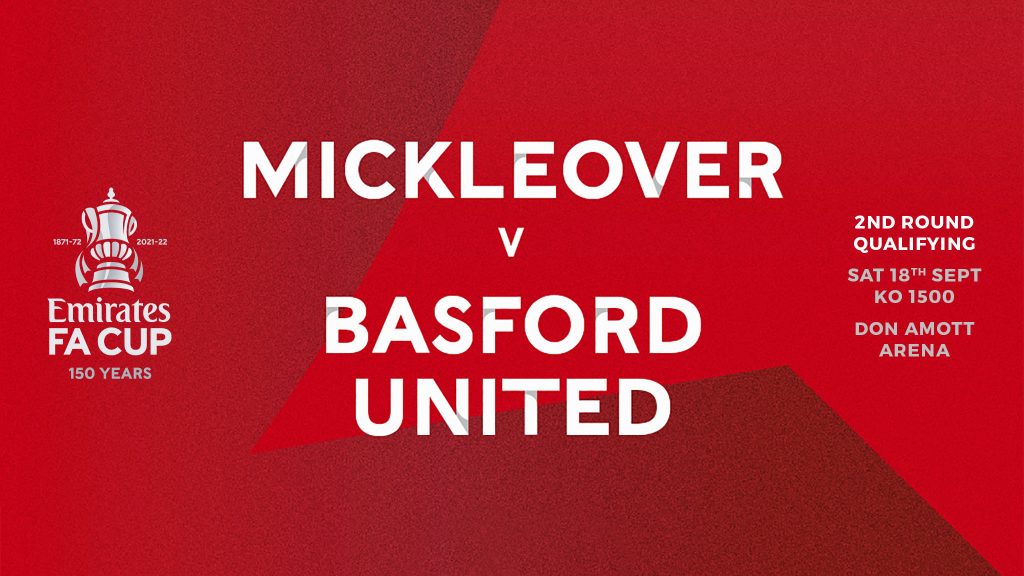 It’s time to take a break from NPL action as the FA Cup comes to the Don Amott Arena, with a second qualifying round tie against Steve Chettle’s Basford United.

A growing injury list and a slump in recent form will hopefully be overcome as Sports look to forward to the challenge of East Midlands rivalry.

Basford have just hit a run of form in the NPL which has moved them up to eighth place. Having drawn four games and lost two in their first six games, they have now racked up three successive wins, without conceding a goal, including a 1-0 home win over Lancaster.

They knocked out Stourbridge at home in the previous FA Cup round 1-0, so will be arriving at Mickleover brimming with confidence.

Basford have the experience of 36 year old Adam Collin between the posts. A former Newcastle junior, with nearly 400 league appearances under his belt, during his time with Carlisle, Rotherham, Aberdeen and Notts County. He came to Basford this season, after a year at Kettering.

Defender Owen Betts came in from Notts County last season, but had a loan spell at Spalding Utd.

Left back Ryan Wilson is the son of former Rams player Kevin. Ryan started out at Ilkeston and after a move to Gateshead, he has played for a number of clubs in the East Midlands region, notably Alfreton, Coalville and Matlock. He came to Basford in May 2019 after spell at Telford.

Defender Dominic Roma started his professional career at Sheffield United. After loans at Boston Utd, Hinckley and Tamworth, he joined Hinckley on a permanent move. He’s played at Alfreton, Harrogate and Gainsborough, before coming to Basford in 2017.

Centre back Brad Gascoigne was a Birmingham City junior, but since his release in 2012 has travelled widely through the non league world. Having played for 17 clubs over his career he came to Basford in 2019 from Barwell.

Declan Dunn is another former Notts County junior. The young Centre Back also had a spell on loan at Grantham before joining Basford last season.

Winger Terry Hawkridge played junior football at Barnsley and Tranmere, before returning to Nottinghamshire with Carlton Town. Spells at Hucknall and Gainsboroough followed before he joined Scunthorpe Utd. Three seasons with the Irons preceded loans at Mansfield and Lincoln, before a permanent move to Lincoln.

Stays at Notts County, Solihull and Boston Utd followed before arriving at Basford this season.

He returned to England with Buxton in 2012, and has also played for Shaw Lane and Gainsborough before signing for Basford in Match 2017.

Veteran striker Aaron O’Connor started off at Ilkeston before joining Scunthorpe Utd. After a brief stop at Nuneaton, he returned to Ilkeston, before a three year spell at Gresley Rovers.

Alex Howes is another to come from the Notts County Academy. The young midfielder made 41 first team appearances for the Magpies, before loans at Coalville and Tamworth preceded his release and a move to Basford in August last year.

Striker Reco Fyfe came in from Gainsborough, having previously played for Ilkeston.

Stef Galinski is a centre back that played junior football  at both Derby County and Stoke City. He had a loan at Corby before joining Boston Utd in 2013. He has since moved on via Stalybridge, Alfreton, Grantham and Hednesford, before joining Basford in November 2018.

Wing back James Clifton started at Aston Villa, before joining Oxford City. Moving on to Kettering, Brackley and Sutton Coldfield, he later joined Nuneaton and came to Basford from Corby last summer.

Originally a Hartlepool Junior, striker Josh Scott was at Mansfield prior to joining Basford, originally on loan last summer.

Rev James is a midfielder who started out as a Rotherham and Oxford Junior. He was on loan at Basford in 2018, but came on a permanent from Tamworth in November 2019.