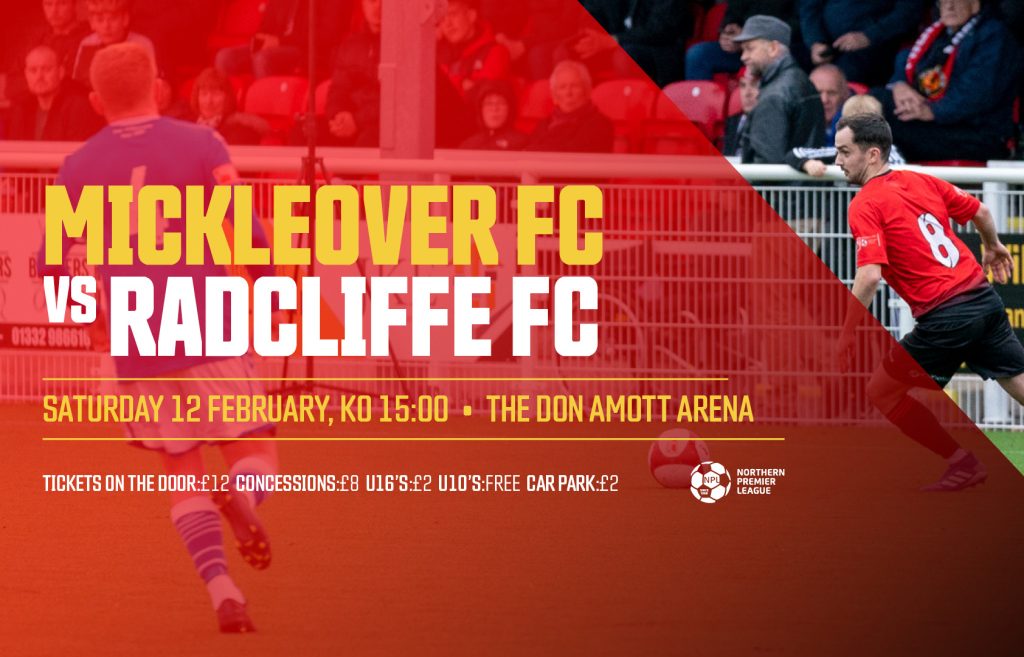 Having had games at Stalybridge and Stafford postponed over the last week, Mickleover will be hoping to continue their 100% record in 2022, as they face Radcliffe at the Don Amott Arena on Saturday.

Currently 12th in the NPL after beating Hyde Utd 3-2 at home on Tuesday evening, our visitors are eight points ahead, but we have two games in hand over them.

Back in November we went down 1-3 at Radcliffe, but they have only had three wins out of their last eight, having gone down 1-2 in their last away game at Lancaster.

Cameron Belford is an experienced goalkeeper and has just regained his place after losing out to Sunderland loanee Jack McIntyre.

Belford started out in Coventry City’s youth team and after a spell on loan at Tamworth, he spent six years with Bury in League’s One and Two making 86 appearances.

He then moved on to Mansfield Town, Rushall Olympic, Swindon Town and Wrexham, before a loan spell at Stranraer.

More recently he has played for Forest Green Rovers, Chorley and Nuneaton, before a loan spell at FC United. He came to Radcliffe in July 2020.

Second choice keeper is Joey Oldham, a home grown talent who is learning from Belford’s experience.

Right or centre back Tom Miller is a former Norwich City Youth team player. He moved on to Glasgow Rangers, but didn’t make the first team, but made one appearance for Brechin City during a loan spell.

His next stop was Dundalk in Ireland, where he played 37 games for the League of Ireland side, before moving to Newport County.

He then joined Lincoln City after an initial loan, before going to League Two Carlisle for four years. Spells at Bury and Fylde then came before his arrival at Radcliffe in October 2020.

Centre back Taylor Jones was signed pre-season from Oldham Athletic’s ranks, while fellow centre back Olly Thornley came in from Curzon Ashton, after coming through their youth scheme.

Defender Jo Cummings came through Sheffield United’s Academy and made two senior appearances for the Blades. He then moved to Charlton Athletic and made two appearances in his two seasons there and was also loaned to Guiseley.

He then moved to Scunthorpe but didn’t get the break and came to Radcliffe initially on loan in March 2020, before making it permanent two months later.

Simon Lenighan is a midfielder with vast experience. After starting out with Leeds Utd, he had loans at Bradford PA and Halifax, before joining Harrogate on his release in 2014.

He had a loan at Alfreton before joining Frickley, Rotherham and then Warrington. Further moves have taken him to Altrincham, Shaw Lane and Glossop NE, then Guiseley before a return trip to Halifax.

He was at Mossley and Buxton before arriving at Radcliffe in July 2020.Then after six months at Telford, he returned to Radcliffe pre-season.

Midfielder Jack Baxter is currently on loan to the end of the season from Preston North End. He has previously had loans at Clitheroe, Stalybridge and Cork City.

Midfielder Matty Crothers is one of Radcliffe’s longest serving players, having been part of their 2018/19 promotion side. He was previously at Curzon Ashton having been discovered in the Oldham Sunday League.

Striker Kole Hall is a Bermudan International. He was a youth team player at Tranmere Rovers, before joining City of Liverpool. He joined Radcliffe in 2020 and has also been on loan at Telford Utd.

After coming through Accrington Stanley’s youth scheme, Bobby Grant went on to make 77 appearances and score 19 goals for the League Two side, before moving to Scunthorpe in the Championship and League One, scoring a further 11 goals in 70 games.

He made 139 appearances and scored 24 goals in his four seasons at Fleetwood and was at Wrexham and loaned at Accrington again and Oldham, before arriving at Radcliffe in June last year as player coach.

Jean Louis Akpa-Akpro is a striker who started out with his home town club Toulouse. He made 46 first team appearances and scored five goals, plus a loan spell at Brest followed before a move to FC Brussels.

He came to the UK in December 2008 with Grimsby Town scoring eight goals in 56 games. Over the next few years he was a regular goalscorer at Rochdale, Tranmere and Shrewsbury and was on loan at Bury too, before joining Barnet.

After a loan at Yeovil he joined UAE side Masfout, before returning to the UK with Oldham Athletic in November 2019. He signed for Radcliffe in March 2020 and his Brother Jean Daniel is an Ivory Coast International. He has scored in both of Radcliffe’s last two games.

Striker Luca Navarro started out at a junior at Bolton Wanderers. He came back to Radcliffe this season from Stafford Rangers and has scored four goals since the New Year, and has had spells at Bamber Bridge and Atherton too.

Raheem Hanley can play in defence or midfield and is a St Kitts International. He played for Manchester Utd Under 18’s before joining Blackburn Rovers and then Swansea in 2016.

He had a spell at Northampton following his release and was loaned out to Halifax. In April 20129 he moved to Connah’s Quay for a year, before leaving for Chorley and finally Mossley, from where he joined Radcliffe in January 2020.

Callum Gribbin is another ex Manchester Utd Junior. An attacking midfielder he spent a further year at Sheffield Utd, before a short spell at Barrow before joining Radcliffe in November.

Former Burnley Junior full back Jack Moore is currently on loan from Blackpool, along with midfielder Tayt Trusty.

John Pritchard is our visitors newest signing, have arrived from Matlock two weeks ago. He is an ex Oldham midfielder whose career has been firmly based in the North West, having played at FC United, Trafford, Ashton, Buxton and Chester

Right back Dougie Nyaupembe started his career at Bury, but after loans at Hyde and Stalybridge he joined Prescot Cables in 2019. Moving onto Atherton he then had his first spell at Radcliffe, before returning from Stalybridge on New Years Day.