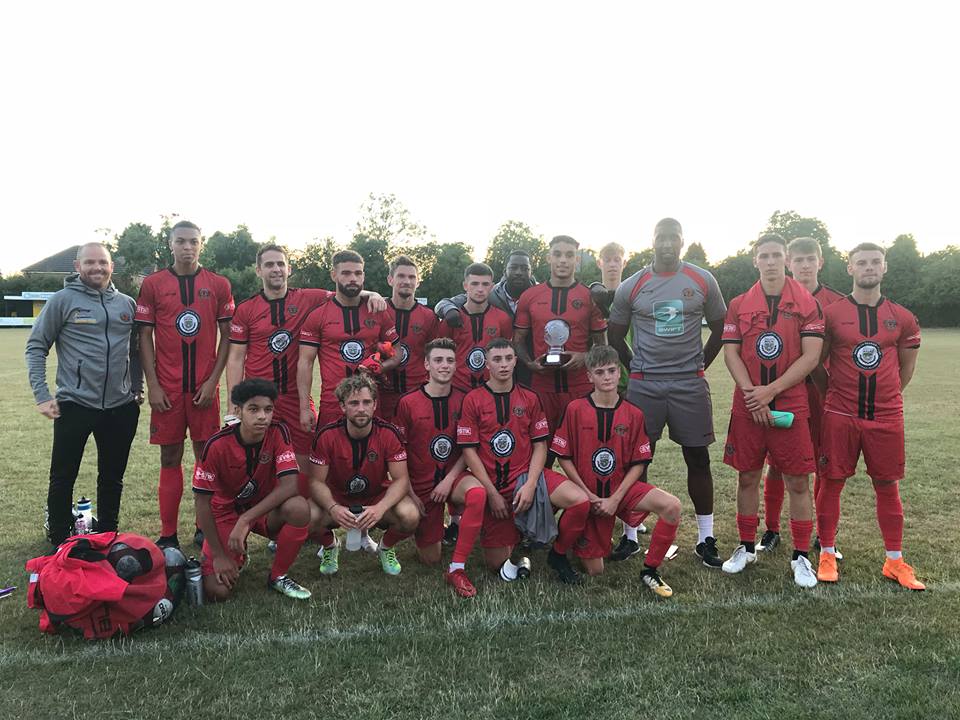 Mickleover Sports continued their pre season run of unbeaten games as overcame a stern test from their near neighbours Mickleover Royal British Legion (RBL) to bring the Helen Belgrave Memorial Trophy back to Don Amott Arena, but most importantly getting more minutes under their belts whilst raising money for charity at the same time.
John McGrath decided to split the squads for the two games in two days geographically, with the Derby based players playing tonight and the rest of the squad based further up north playing on Wednesday night at Heanor Town. This meant that a Trialist keeper started in goal, with Tristan Matthews and Tom Eccleshall at full backs. Kevin Grocott returned from injury to partner Tyreece Robinson at centre back, with a midfield make up of Lewis Belgrave, Jimmy Phillips, Curtis Burrows and Will Norcross. Up front Sports went with the duo of Evan Garnett and Clinton Morrison.

RBL had the first chance of the game early on as the No.9 headed a lovely cross into the box just wide of the left hand post. A minute later Evan Garnett went up the other end and fired an effort just over the bar. Will Norcross then had two chances to give Sports the lead with one being blocked and the other saved by the keeper. Jimmy Phillips then had a low driving effort saved by the keeper. Then a lovely move between Eccleshall and Morrison out Garnett through 1v1 with the RBL keeper but he blazed his effort over the bar. But it wouldn’t be long before Garnett got his goal to put Sports 1-0 up on 24 minutes. The ball was worked into the box and after a couple of efforts blocked it fell into the path of Garnett who notched his first goal of this current pre season with a low drive under the RBL keeper and into the net.
From then Sports pressed on and take over proceedings as Norcross and Garnett had chances leading up to half time to extend the lead. Lewis Belgrave had an effort saved low down by the diving RBL keeper before he was hard at work again as the keeper had to produce a stunning reaction save to keep out Trialist’s volleyed effort. This kept the score to only the one goal going into the break when it could have been a much bigger score line.

As they did in the first half Mickleover RBL had the first chance in the second half. The No.8 delivered powerful driving strike that the Trialist keeper did well to bring down into his arms. From then on it was all Sports again as the difference in level soon showed as they grabbed a second goal within the first 10 minutes of the second period. An effort from Trialist was saved by the keeper but it was followed up by Will Norcross who slide an effort home under the keeper to extend the lead. Sports could have gone 3-0 up but Belgrave could only hit the post with his latest effort.

On the hour mark Sports boss John McGrath made four changes as off came Eccleshall, Trialist, Burrows and Morrison and on came four academy players Gordon, Davies, Parkin and Walsh. A cracking free kick from Belgrave is tipped over the bar from the RBL keeper, who was having a very good game in net. As the game was drawing to a close Norcross struck an effort off the bar and after what seemed like hundreds of blocked attempts the ball was eventually cleared by RBL as the ball just didn’t seem to drop for a Sports player. One final change was made from Sports as a rare moment occurred as goalkeeper Lewis King came on outfield as a striker in place of Evan Garnett. The Mickleover stopper could even have grabbed a goal for himself as he look lively in his cameo outfield. But the strike from outside the box was hit some distance over the bar. This was the final action of the game as Sports won the Helen Belgrave Memorial Trophy and raised some fantastic money towards the cancer ward at Derby Hospital. Of course it all counts towards match fitness with the season not too far away now. The rest of the squad will get their chance to get their pre season minutes as they travel to face former Sports player Dan Martin’s Heanor Town on Wednesday night, 7:30pm Kick Off.