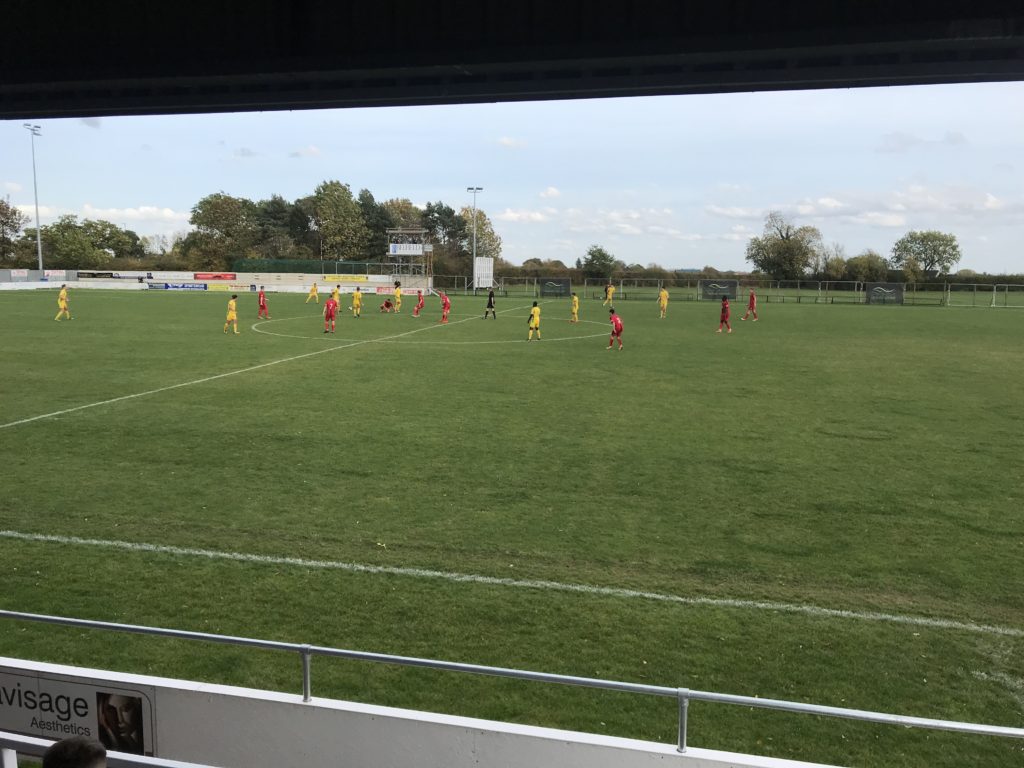 In very tough windy conditions on Saturday afternoon, Mickleover Sports fired a blank as they drew 0-0 with 6th placed Nantwich Town. The weather certainly played a part in what was in large parts an uneventful match. A few crunching tackles and a second half penalty miss from Sports striker Nathan Jarman were the main highlights of a pretty drab affair but with plenty of positives as Sports did have chances to win it and a clean sheet can be taken into the upcoming matches.
Lewis King started in goal with a back four of Jake Scott, Pablo Mills, Tom Burgin and Mason Warren. John McGrath and Ricky Ravenhill started in midfield with Jimmy Phillips and Oliver Roberts on the wings. Nathan Jarman and Evan Garnett started up front. On the bench were Ted Cribley, Harley Kozluk, Isai Marselia and Curtis Burrows.
The game started with Nathan Jarman going into the referee’s notebook after catching the goalkeeper with his foot whist he was clearing the ball up field. The first Sports chance came as a ball over the top from McGrath found Evan Garnett running through only for Spiess the Nantwich keeper getting there first before the Sports striker could get a foot to it. Jarman had a chance next as he found some space on the left hand side of the box but his effort was deflected for a corner. The next chance fell to the visitors as a curling effort from Sean Cooke was seen all the way into his gloves by King. Next Cooke had a free kick deflected off the Sports wall and again the ball fell kindly to King. Nantwich were having a really good spell in the game and the next chance came and went as a Louis Barnes cross was caught by the wind and went over everyone inside the box and out for a goal kick. Craig Lindfield then let fly from distance which King had to save for a corner, from which Sports were given a free kick after a foul on King from the resulting corner. The final two chances of the half again fell to the Dabbers as Lindfield and Matthew Bell were next to try their luck but again due to the high winds but went wide of the mark.
Into the second half the game sparked into life when soon after Saunders went close for the visitors, Sports were awarded a penalty kick. From a free kick into the box Jake Scott was brought down inside the area and the referee showed no hesitation in pointing to the spot. Up stepped striker Nathan Jarman who unfortunately had his strike saved in the bottom right corner by the keeper and round the post for a corner. But from the resulting Sports could have made up for the miss but it was not meant to be as a succession of saves and blocks resulted in an overhead kick from Ricky Ravenhill inside the box resulted in the Dabbers keeper tipping the ball over the bar. Next Sports did get the ball into but Evan Garnett was adjudged to be offside by the linesman on the far side. Sports then made a change as Oliver Roberts made way for Curtis Burrows. As Sports piled pressure on Nantwich had a chance on the counter attack as Sean Cooke was played in 1v1 but Lewis King stood strong and saved the effort and pounced on the second ball afterwards straight away. A second substitution for Sports came and went as Evan Garnett came off for Isai Marselia. Next a free kick from Barnes was deflected onto the wall and was heading into the left hand side of the net. But Lewis King showed great reactions to change his direction at the last second and save the ball onto the post and caught the rebound into the safety of his gloves. The final chance of the game fell to Nantwich as Cooke went close again however his strike went wide of the mark. A final chance for Sports for forced in stoppage time as Tom Burgin had to come off with an injured hamstring which looks like keeping the Sports defender out for a long period of time. On came young player Harley Kozluk. However it was too late for any real impact to be made as soon after the referee blew for Full Time. John McGrath felt it was two points dropped but the old saying is if you can’t win it then don’t lose it and Sports held firm to keep a clean sheet and pick up a point. Next up it’s a local Derby with rivals Matlock Town on Tuesday 16th October with a 7:45pm kick off back at The Don Amott Arena.