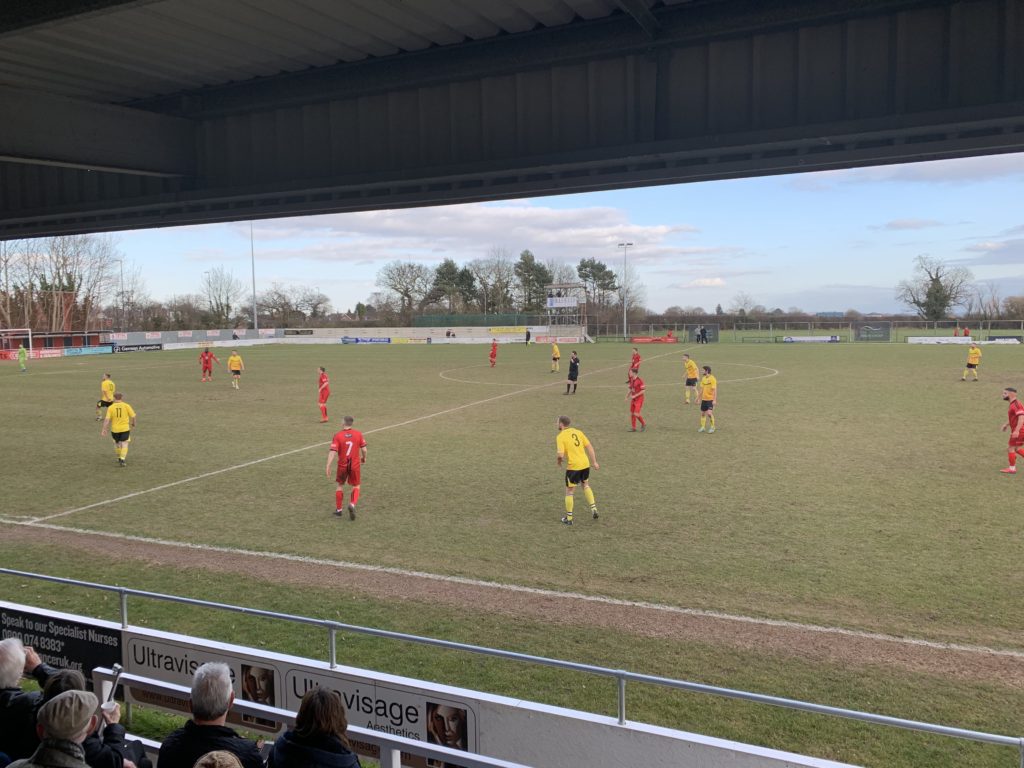 With a disappointing result away at Marine, Sports come into this game aiming for success. Sports manager John McGrath put out a strong 4-4-2 formation with Lewis King in goal. The back four consisted of Jake Scott, Mason Warren, Pablo Mills and Durrell Berry. The midfield consisted of Ricky Ravenhill, Jimmy Phillips, Jack Walsh and Kyle Carey. The two front strikers consisted of Shaquille McDonald and Evan Garnett. The bench consisted of Will Norcross, Joel Bonner, Karel Tvaroh, Adam Prusa and a first senior debut for Mickleover Academy player Jack Thatcher.
First half commenced on the 4th minute, chance came for Hyde. Dean Smalley ran down to the left side of the box but Lewis King gets up and close to him before he could make an impact and Sports go up the other end and a chance came for Sports with Shaquille McDonald aiming for goal but went out of the right side of the post. On the 10th minute, a couple of strikes from the visitors in the last couple of attacks but both shots went over the bar. On the 13th minute, chance came for Sports with Shaquille McDonald who ran through on goal and dinked it over the ball but was flagged offside. On the 16th minute, another great chance came for Sports with Sports awarded a free kick. Mason Warren took the free kick and was curled over the wall but is parred away by Hyde’s goalkeeper Peter Crook.

On the 25th minute, chance came for Hyde. Hyde were awarded a free kick and after four efforts, Hyde were awarded a corner after Sports put their bodies on the line to block the shot out. Corner was taken and out into the Sports area. On the 33rd minute, Jake Scott was down for quite a period of time due to his shoulder but was ok to continue with the match. Sports had a throw in and a chance came for Sports but Jimmy’s chance goes to Kyle Carey and his shot was saved by Hyde’s keeper Peter Crook. On the 44th minute, a huge chance came for Hyde from a corner kick and ref awarded Hyde a free kick. Jordan Fagbola took the free kick and was saved by Lewis King. During added time in the first half, goal came for Hyde. Ball came into the box from a corner and Dean Smalley headed it into the bottom left corner to give Hyde the lead.

Second half commenced and on the 49th minute, Sports made a substitution after Jake Scott went down again with his shoulder. Karel Tvaroh replaced Jake Scott. On the 54th minute, Sports had a scare with Shaquille McDonald who got completely wiped out by Jordan Fagbola but Shaquille was ok to continue. Two minutes later, Sports made another substitution with Will Norcross replacing Jack Walsh who was on a yellow card from an incident in the first half. On the 59th minute, chance came for Sports with Pablo’s head shot tipped over the bar by Hyde’s keeper Peter Crook and out for a corner. Corner was taken and cleared away. On the 60th minute, a huge chance came for Sports after an audacious over head kick by Shaquille McDonald from inside the box went over the bar and out for a goal kick.

On the 70th minute and another goal for Hyde. From a corner awarded to hyde, Sports tried to get the ball away and on the third attempt, Ross Daly smashed it into the right corner and gave Hyde the all advantage lead. On the 76th minute, Sports made their third and final substitution with Adam Prusa replacing Kyle Carey. Two minutes later and a huge chance came for Hyde. A 2v1 situation for the visitors occurred but Lewis King tipped it over the bar for a corner. Corner was taken and a free header from the corner was saved again on the line by Lewis King. On the 80th minute, huge chance came for Sports with Shaquille’s effort from outside the box going out wide of the left side of the post. On the 84th minute, another big chance came for Sports after a free kick was awarded. Mason Warren took the free kick and his shot went straight into the hands of Hyde’s keeper Peter Crook. A minute later and once again, another huge chance came for Sports. The ball was into the Hyde area and Adam Prusa smashed it low and hard as it is saved by Hyde keeper Peter Crook. Shaquille McDonald had a follow up but his shot goes out wide of the left side of the post.