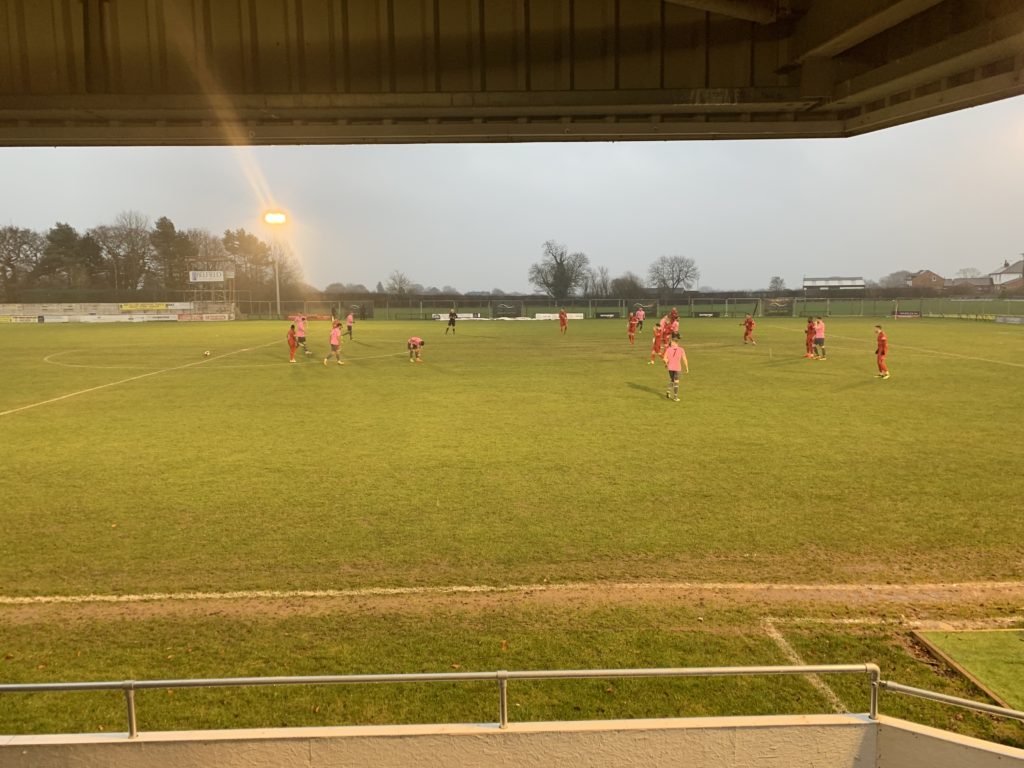 We were underway with the first half and on the 4th minute, Sports started the first half with an effort from Mason Warren but went out wide of the left-hand post. Throughout the first 15 minutes of the first half, both sides had chances to score but all with excellent saves from each defence. On the 22nd minute, a chance came for Sports with Nathan Jarman managing to burst through Grantham’s back line, but his shot was saved by Grantham’s keeper. On the 28th, a chance came for Grantham. Shaun Harrad’s deflected shot fell to Tom Siddons but his shot was saved by Lewis King and flagged offside. Sports also made a change as Kyle Carey sustained an injury. Will Norcross replaced Kyle Carey.

On the 35th minute, a controversial sending off happened with the referee sending off Lewis King after Lewis King denied a goal scoring opportunity for Grantham outside the box. Grantham was awarded a free kick and Nathan Jarman went in goal for the Sports. On the 38th minute, after all the controversy, another controversial situation occurred when a goal came for Grantham but was apparently offside. Grantham goal scorer Shaun Harrad was seemed to be stood in an offside position when the ball came to him, but the referee gave Grantham the goal. On the 41st minute, a chance came for Sports with an effort from Ben Turner being saved out wide of the post. On the 1st added minute of the first half, Sports were awarded a free kick. John McGrath took the free kick and aimed for goal but was saved by the Grantham goalkeeper.

Half Time Mickleover Sports 0-1 Grantham with a very interesting first half.

Second half went underway and on the 51st minute, Sports were awarded a corner. From a John McGrath corner, Pablo Mills had his effort cleared off the line. On the 54th minute Grantham almost made it 2-0. Bradley Fortnam-Tomlinson had an open net, but his shot went out wide. On the 63rd minute, another chance for Grantham. Danny Durkin’s shot fell into the hands of Nathan Jarman. On the 71st minute, Sports got the all-important equaliser. Sports were awarded a corner which was taken by John McGrath. From John McGrath’s corner, the ball fell to Pablo Mills and was smashed into the bottom left corner.

But nine minutes later, a goal came for Grantham. Bradley Fortnam-Tomlinson slid past the injured Jake Scott and ran into the box before tapping past Jarman and into the bottom right corner. At this time Sports made a substitution. Harley Kozluk replaced the injured Jake Scott. Then five minutes after that goal, Grantham scored again, and it was game set and match for them. Ross Barrows Struck the ball from distance and went under Nathan Jarman into the bottom right corner.