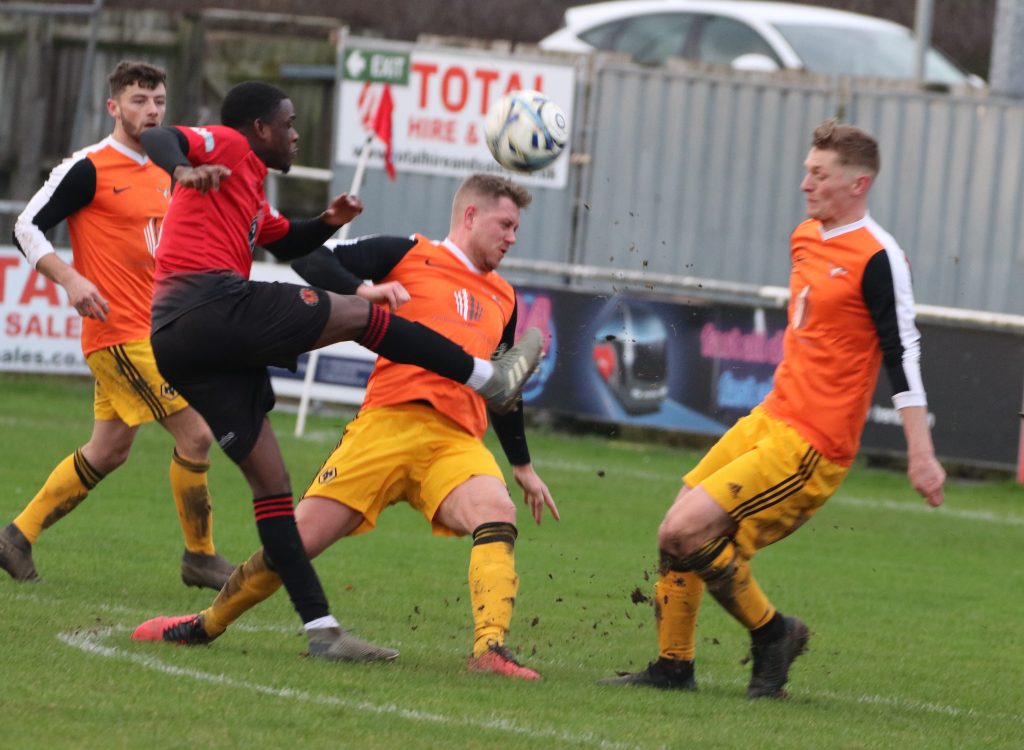 Mickleover Reserves came out on top of a local Derby with a home victory against  Hilton Harriers, after two first half goals gave them three more points in their Central Midlands League South Division campaign.

The opening 10 minutes were end to end with neither side having any clear cut chances. But on 11 minutes Tefera was tripped just inside the box and after receiving treatment, took the penalty himself which was well saved by Hilton keeper Harry Wood.

Jim Rushby then weighed in for Hilton with a long shot just over the bar, before Eccleshall scored for Mickleover in the 18th minute, only for the referee to change his mind and give a free kick, after a very delayed offside decision, when the players had already lined up for the restart.

Ayetine had a good shot from outside the area four minutes later earning a corner, before a Rushby header for Hilton was just over after connecting with a cross from the left.

Wing backs King and Lewin were both working well on the overlaps and providing plenty of service into the area for Mickleover, but goalkeeper Wood had most of it covered.

Karl Chadwick tried his luck for Hilton and wasn’t far off target, followed a few minutes later by another good effort from Rushby, as Hilton continued to favour the long shot from outside the area. 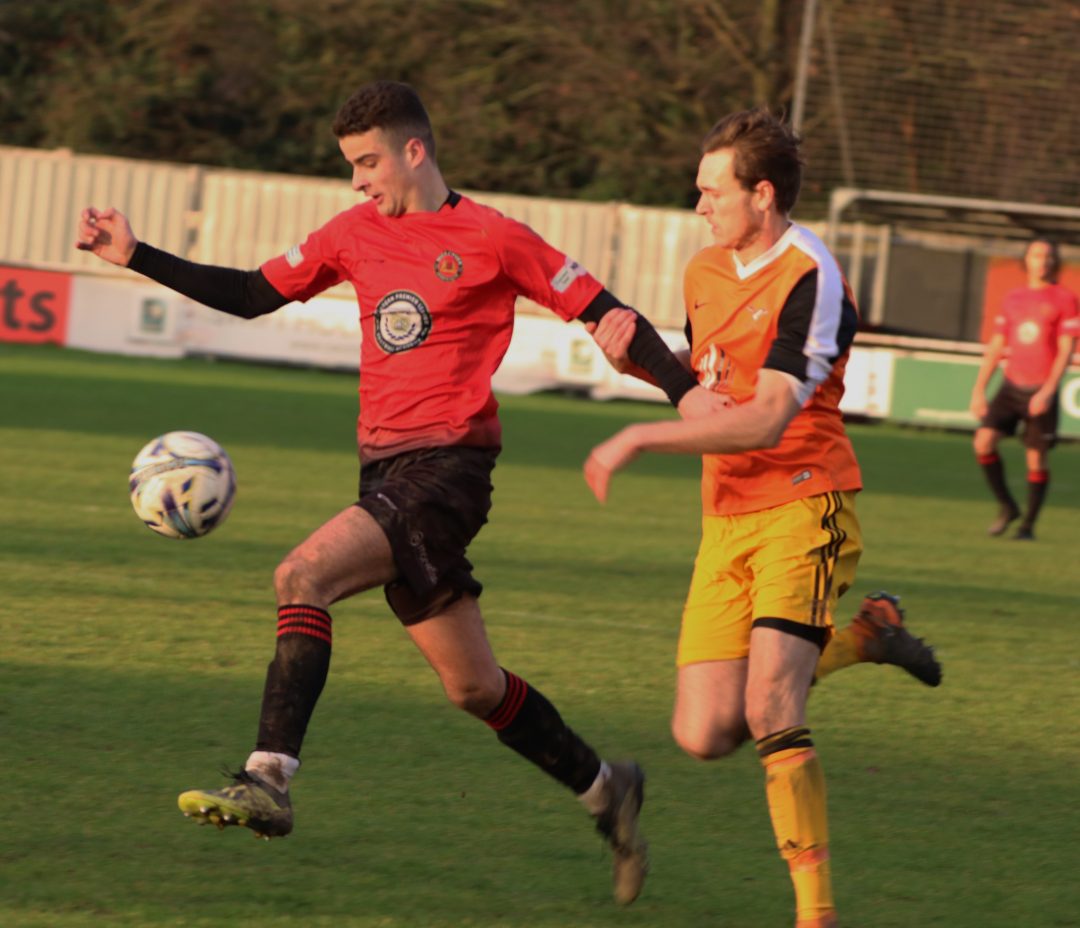 After 37 minutes Monteiro found himself one on one with keeper Wood, successfully rounding him to open the scoring 1-0.

Hilton came straight back with a wide shot from Chris Smith, before King had a shot blocked for Mickleover from Feurtado’s cross.

Massampo found himself in the referee’s book after halting a 40th minute break for Hilton, but a minute later Mickleover were awarded a second penalty, when Chris Martin tripped Monteiro from behind as he headed for goal. This time Tefera made no mistake, 2-0.

Mickleover earned another corner before half time when a King run found Monteiro again, but his shot was blocked. Then Fuertado put a dangerous ball into the Hilton box, with Calderone’s header going out for a corner.

So it was 2-0 officially, but could have been four, although Hilton had continued to show some danger on the breaks too, making sure that Williamson and Calderone were kept busy in central defence.

Mickleover started to push hard again as soon as the second half kicked off, with Monteiro holding a long ball well from King after five minutes, but his attempts to shoot were blocked.

But Smith quickly responded for Hilton again and after jinking his way through the early defence, his shot was just over.

As in the first half it continued end to end and after 54 minutes, Monteiro’s charge was halted by Wood advancing from his line to snatch the ball from the Mickleover striker’s foot.

The ball then bounced around the area for a while before Ayetine was blocked and lost possession. 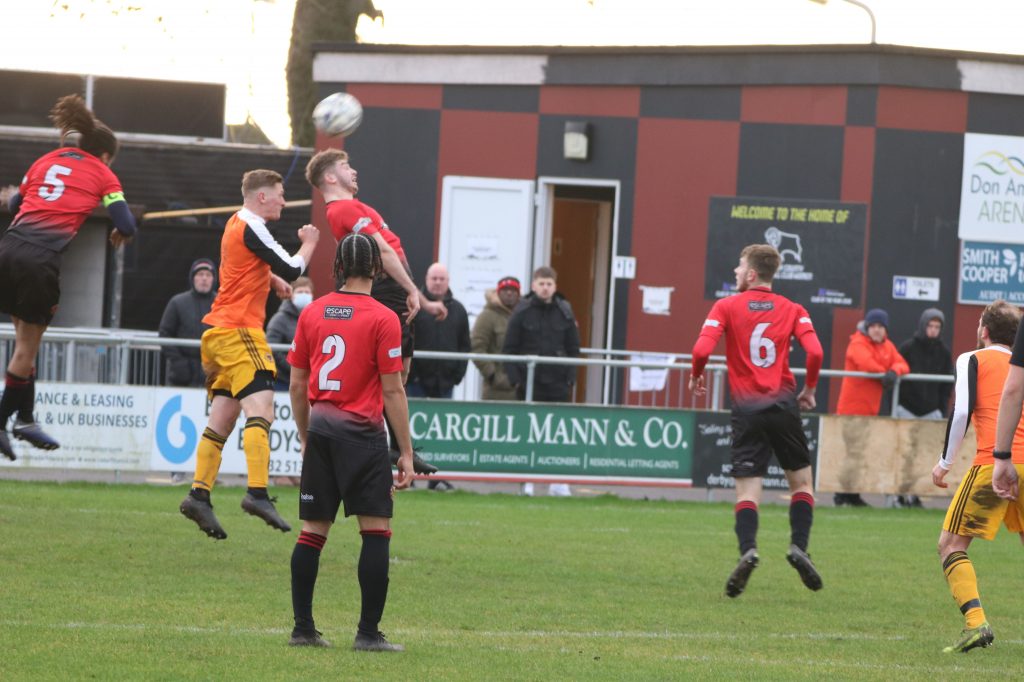 55 minutes gone and Morrison was on for Calderone, just before Fuertado managed to get a good shot in through a crowded area.

Hilton had their own penalty claims waved away after a challenge from Sports keeper Smith, but it was so nearly a third goal when Tefera’s shot hit Jake Atkinson very hard at point blank range as he stood on the line, after another strong run down the left from Fuertado.

Rushby again threatened for Hilton, with a 66th minute shot after a free kick.

Anthony then came on for Fuertado, before another King run down the right provided a telling cross, which Monteiro put against the right hand post.

Goals could still come from either side, despite changes in tactics from both sides. Ayetine was hauled back by his shirt after chasing a long ball from Williamson and then King had a wild shot himself.

Then Hilton’s Tom Rushby managed to find some space to fire in as hot, just wide of Smith’s left hand post.

Assistant coach Hayer was the next sub as he came on for Lewin, but shortly afterwards skipper Williamson found himself yellow carded.

Hayer had a shot which landed on the roof of the net after 84 minutes and a later Hilton header went straight into Smith’s arms.

As the full time whistle beckoned, Ayetine had a shot deflected out for a corner, but Hayer’s ball into the area had no one on the receiving end.

So it remained a hard fought 2-0 victory, against a tough Hilton side, who despite going behind, continued to push forward right to the end of the game.