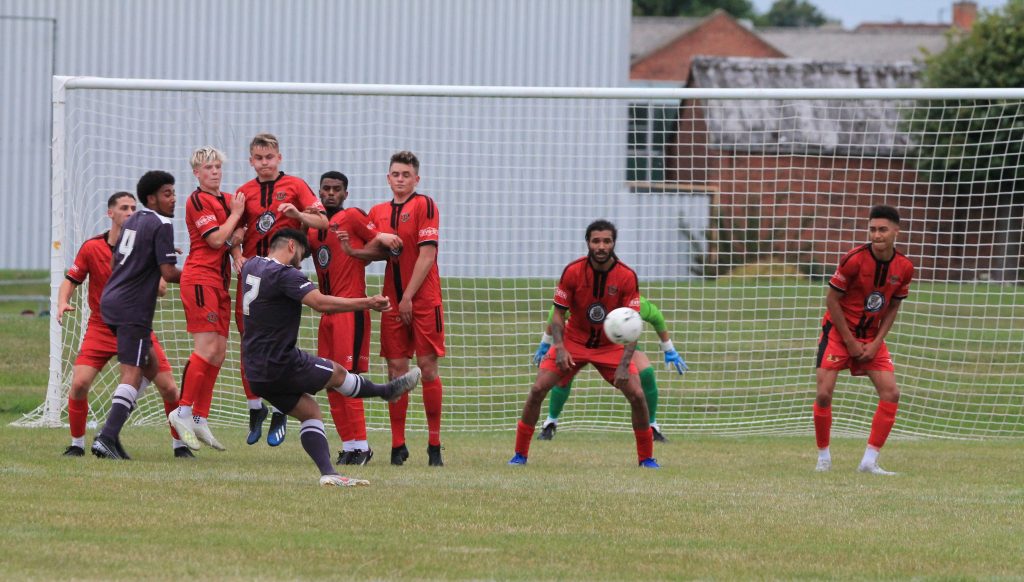 The Sports reserve team began the preparation for their first forthcoming season in the Central Midlands League Division South, with a friendly match against Midland Regional Alliance Premier Division side Derby Singh Brothers at Rolls Royce.

Dave Mackenzie and Aaron Hayer had the majority of last year’s team available plus a few new faces.

It was played as three-thirds rather than two halves, but after an even opening 10 minutes with a fair share of free kicks to both sides, Singh Bros began to go for a shoot on site strategy rather than close in play.

Sports had the first corner after about seven minutes, but  Barker’s cross wasn’t cleared and  Davies was fouled, but Tefera put the free-kick over the bar.

Singh’s went close too but their shot was cleared by Williamson, before Sports retaliated with a shot from Barker well saved by Singh’s keeper.

Tefera was on the receiving end of a couple of reckless tackles, but Singh’s strikers determination continued to cause problems to Sports defence.

There was a fairly fortunate free kick for Singh’s on the 20 minute mark. The kick went to the right of the Sports wall and was buried into the far corner of Smith’s net to give Singh’s the lead.

Singh’s went close again from the kick-off before Satchwell slid in by the far post and was close to grabbing an equaliser.

Just before the first 30 minutes were up both side had chances, with Singh’s firing just over the bar and Murray having a shot blocked from Lewin’s corner.

There were a number of changes for the second third, including Charlie Cotton, Clarence Clark and Joe Hopkins.

Hopkins was quickly on the attack but couldn’t find the space for a clear shot. But some heavy tackling forced the referee to reach for his book too.

As Sports started to push forward more as a team, Hopkins had a one on one with the Singh keeper, and missed out on a scoring chance by a whisker.

It was still 0-1 as the sides prepared for the final third and more changes were made.

Most of you got to play for 45 minutes, some got more

said Hayer as they kicked off again.

Kiran Sanghera was in goal and one of his first jobs was to face a Singh Bros penalty, which they duly scored.

But Ben Lewin pulled one back in the closing stages scoring direct from a corner kick.

The final third showed the progress made on the night as the Sports players began to gel and threatened Singh’s penalty area on more than one occasion.

Sanghera had to make one blocking save, as Singh’s continued to shoot at will, while Sports had a shot just over the bar before the final whistle.

A promising start and lots more to come.