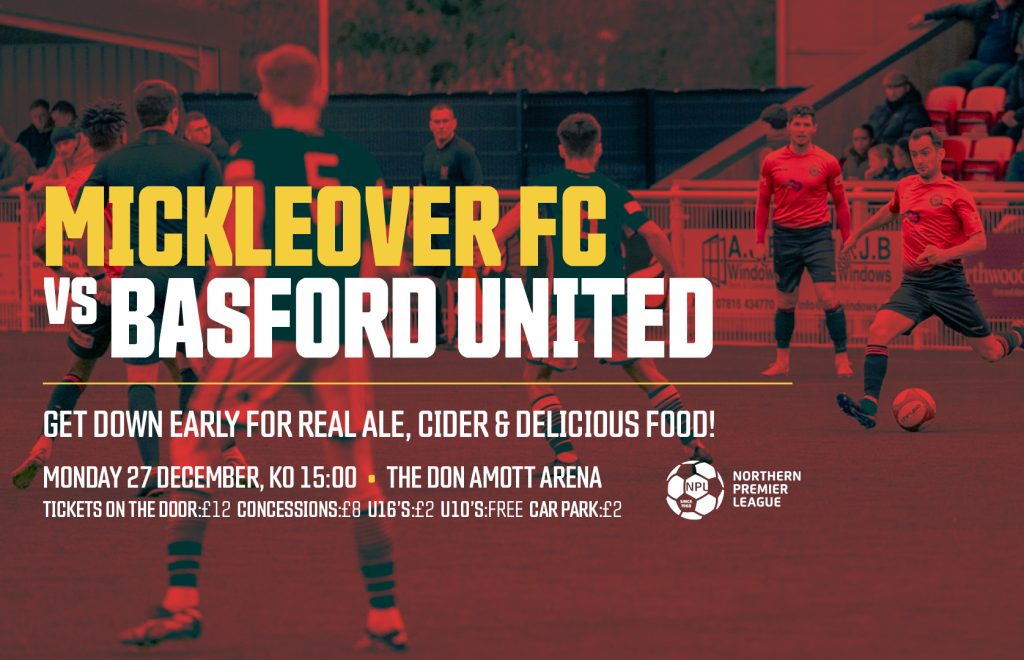 For the second time this season Mickleover will be hosting Basford Utd on Christmas Monday, having been knocked out of the FA Cup by the Nottingham team 1-3 back in September.

Although 10th in the NPL, Basford haven’t been in the best of form of late, having only taken their first win in eight matches last Saturday, 2-0 victors at home to Atherton.

They have managed eight wins in total, four at home and four away, but unlike Mickleover’s injury ravaged squad, manager Steve Chettle has managed to field a fairly consistent line-up.

Former Heanor Town player Jordan Pierrepoint is now the first choice goalkeeper, following the recent retirement of the experienced Adam Collin. He was signed back in May 2020, with Youth team keeper Gianni Musson now his understudy.

Defender Owen Betts came in from Notts County last season, but had a loan spell at Spalding Utd.

Left back Ryan Wilson is the son of former Rams player Kevin. He started out at Ilkeston and after a move to Gateshead, played for a number of clubs in the East Midlands region, notably Alfreton, Coalville and Matlock. He came to Basford in May 2019 after spell at Telford.

Defender Dominic Roma started his professional career at Sheffield United. After loans at Boston Utd, Hinckley and Tamworth, he joined Hinckley on a permanent move. He’s played at Alfreton, Harrogate and Gainsborough, before coming to Basford in 2017.

Centre back Brad Gascoigne was a Birmingham City junior, but since his release in 2012 has travelled widely through the non league world. Having played for 17 clubs over his career he came to Basford in 2019 from Barwell.

Declan Dunn is a former Notts County junior. The young Centre Back also had a spell on loan at Grantham before joining Basford last season.

Winger Terry Hawkridge played junior football at Barnsley and Tranmere, before returning to Nottinghamshire with Carlton Town. Spells at Hucknall and Gainsboroough followed before he joined Scunthorpe Utd. Three seasons with the Irons preceded loans at Mansfield and Lincoln, before a permanent move to Lincoln. Stays at Notts County, Solihull and Boston Utd followed before arriving at Basford this season.

He returned to England with Buxton in 2012, and has also played for Shaw Lane and Gainsborough before signing for Basford in March 2017.

Rev James is a midfielder who started out as a Rotherham and Oxford Junior. He was on loan at Basford in 2018, but came on a permanent from Tamworth in November 2019.

Striker Kieran Wells is a new signing, having only made his debut last Saturday, after coming from Stalybridge. It’s his second spell at Basford, having originally arrived from Handsworth in 2016. He has since played at Stamford, Ilkeston and Hednesford twice and Basford are his third club already this season.

Former Birmingham City central midfielder Sean Devlin is another newcomer who debuted last Saturday. He has recently been playing for Sutton Coldfield.

Marcus Marshall is a winger that started out at Blackburn Rovers. He made one senior appearance, as well as gaining experience with loans at League Two Rotherham and Macclesfield.

He then joined Bury in League One, but was loaned out to Grimsby Town, before moving on to Morecambe, Lincoln City, Boston Utd, Coalville, Alfreton and Hyde, from where he joined Basford in early 2020.

Attacking midfielder Niall Towle was a May 2020 signing from Long Eaton Utd. He has also played for Hucknall Town and has recently returned from a loan at Corby.

Lewis Rourke is one of the players to come out of Basford’s successful FA Youth Cup team, along with. midfielder Nat Peters, defender Jordan Haywood and Rory Harrison.

Haywood has been on loan at Newark FC too and spent time previously in the Mansfield and Scunthorpe Academies, with Peters a former Mansfield junior too. Harrison spent six years in the Rotherham Academy.

Kick off as usual is 3pm at the Don Amott Arena, with the bar open and hot food available too.