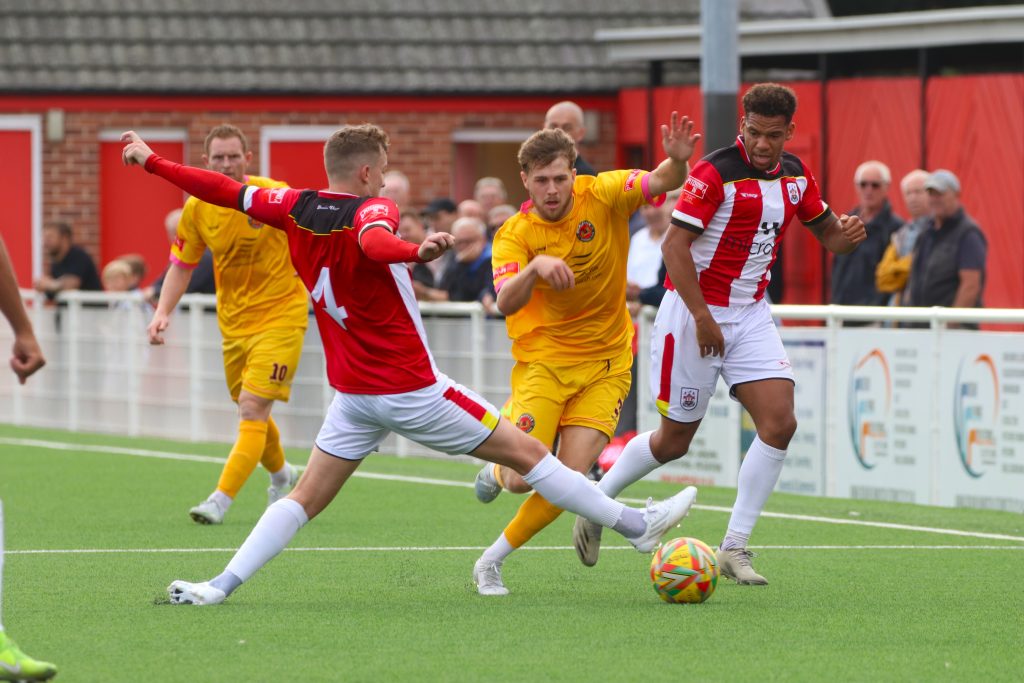 Having barely had chance to draw breath after last Saturday’s home win over St Ives, it was off to Ilkeston Town’s new Manor Ground for the Bank Holiday Derby match.

There was just one change in the starting 11, with Ryan Wilson back in for Jordan Fankwe.

The opening minutes were fairly even, with Hedge making a save from Montel Gibson in the first minute, before a Dolan cross was headed out for the first corner. Warren’s kick found Wilson, but the midfielder miscued his shot

Dales had a shot over the bar following a sixth minute corner and six minutes later Beavon won the ball to send Dales on a run, with Warren just failing to connect.

Gibson had another speculative long shot for the hosts but was well wide, and then after 14 minutes Dolan charged through and sent a shot whistling just inches past the post.

As Ilkeston had some random and off target shooting, Mickleover were becoming more and more dominant and after 22 minutes Warren crossed and Reeves was on the end of it for a 1-0 lead.

Only two minutes later another telling run down the left from Dolan, saw Reeves’ header just over the bar.

Reeves did get the ball in the net again on the half hour, after a Warren free kick had found Beavon, whose deft touch set up Reeves who was flagged offside.

The pressure on the home defence continued to build, with little creativity in return. Dales was fouled a couple of times as he attempted to start his runs and after 38 minutes Mann made the first of a couple of threatening crosses into the box. They were initially cleared, before a Wilson blast was deflected for a corner.

With little threat from a lethargic Ilkeston attack, Butler and Watt had things covered at the back, allowing Mann and Dolan more freedom on the wings, with Bateman going defensive in midfield.

A Dolan cross on the left found Reeves’ head in the 40thminute, but his effort was just over the bar and a couple of minutes later Deeney in the Ilkeston goal had to make a double save, from Dolan and Reeves’ rebound.

But with a minute to go to half-time Reeves made it 2-0 with a fine solo run, to confirm Mickleover’s first half dominance.

There were no immediate second half changes, but Reeves was soon in action with a fairly tame shot after 46 minutes.

Sports were still well in control and on the hour Dolan made it 3-0 after Beavon’s skilful touch set him for his fourth goal in the last four games.

Ilkeston began to use their subs and appeared to restructure their whole challenge, which soon started to turn the tide.

Gibson almost broke through after 70 minutes, before Dolan’s last-ditch tackle stopped him and then skipper Fenton had a shot blocked after a corner.

Another header from Gibson went close after 73 minutes, but only a minute later an Ilkeston free kick into a crowded box found Gibson and it was 3-1.

Hedge made a save from a Willock header after 79 minutes, but it was only another three minutes when Gibson planted his shot from the edge of the box into Hedge’s top right-handcorner 3-2.

Marshall came on for Beavon and although time was beginning to run out for the hosts, it became almost a cup tie ending, with Ilkeston throwing everything at the Mickleover defence.

There was an 87th minute scramble in the Mickleover defence and almost an equaliser, but it finally resulted with a foul on Hedge.

Dales came off to make way for Walker, but the referee had added on a massive six minutes. It was pressure all the way to the final whistle, but it remained 3-2, a first away win of the season and second successive victory.