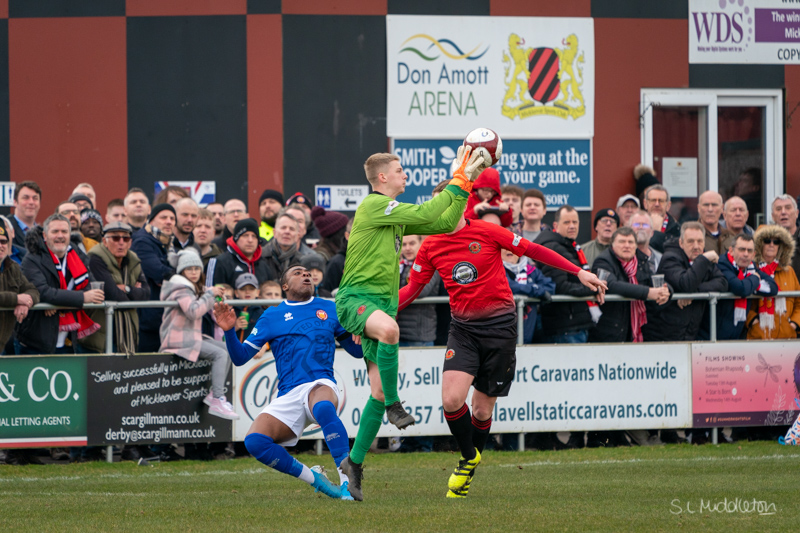 It was just one of those days for Mickleover Sports and with United FC’s Nigerian born striker Tunde Owolabi in top form, they were never in with a shout.

There was only three minutes gone when Adam Dodd and Charlie Ennis combined down the left, before a telling cross allowed Owolabi to find the net from close range.

Four minutes later it was nearly a second, when Owolabi hit the bar from an Ennis free kick.

Sports defence continued to be on the retreat and it was almost 10 minutes before they made a break from their own area.

But with Owolabi easily outpacing Dean Freeman, he was heading goal wards again after 14 minutes, but this time his effort was wide of Nathan Broome’s right hand post.

A couple of minutes later Patrick Webb led Sports first real attack, but was foiled before he was able to shoot. But Sports had a penalty shout turned down from another Webb attack, when he was fouled chasing a through ball.

Webb had another attempt blocked before attention changed to the other end, where Broome and United’s Chris Doyle collided after a free kick. Fortunately Sports keeper was able to continue after treatment.

It was still proving tough for Sports midfield to provide any service to the strikers, but after Stuart Beavon was fouled, Mason Warren put his free kick wide.

Aman Verma then latched onto a Beavon cross to put his header just over, but the action soon turned again in United’s favour.

Owolabi had hit the post before it was cleared off the line, but in injury time he blasted his second high into the top corner.

Initially it was a more even start to the second half, but United’s Aaron Morris had a shot over the bar and Ennis had a shot straight at Broome.

Karel Tvaroh came on for Andy Wright on the hour and almost immediately put a ball into the box to force United keeper Cameron Belford into action.

But Sports kept up their challenge with Beavon darting away, before his cross to Webb was cut out by Belford. Webb then put a Tvaroh cross over from close range.

It wasn’t long before Broome was busy again, he saved a shot Morgan Homson-Smith and then had an Owolabi rebound go close.

Sports made their second substitution on 66 minutes when Ricky Ravenhill replaced Verma, but United continued to control the game.

They went close when Broome was able to intercept after Owolabi charged through from his own half and a couple of minutes later he saved again from a Curtis Jones header.

With 10 minutes of normal time left, Owolabi completed what seemed to be an inevitable hattrick, with a rebound shot after his own first attempt was kept out by Broome.

Sports never gave up and made a further change when Durrell Berry was replaced by Josh Satchwell. But Adam Dodd smashed home United’s fourth after 88 minutes for a 4-0 win, which puts them in second place in the Northern Premier League table.