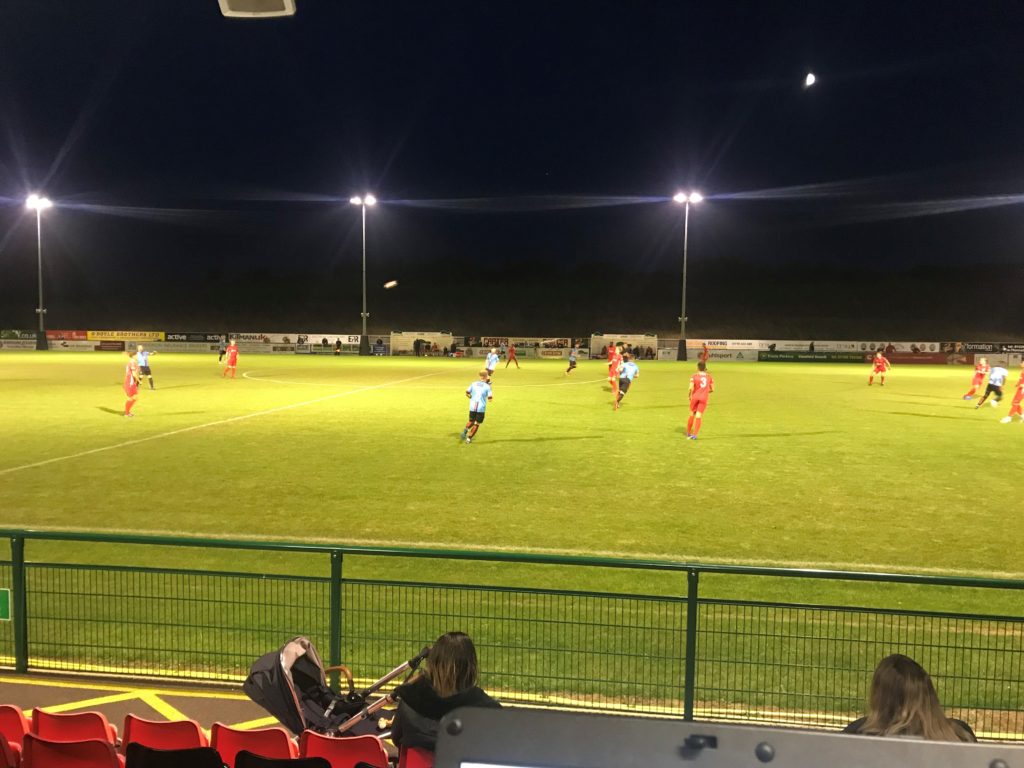 Sports progressed into the 2nd Round of this seasons Integro League Cup after a 3-0 win away at Division One East side Stamford AFC. In what was a very windy and blustery Tuesday night as Sports made the long trip down to South Lincolnshire but the small travelling continent from the away side were rewarded with goals from Nathan Jarman and Isai Marselia but were certainly made to work hard for their win as the home side certainly had chances to score but non the less it was Sports who progressed.

Sports made a few changes to the side that lost 1-0 away at Farsley Celtic the weekend before. Lewis King remained in goal but Academy and Reserve team player Harley Kozluk was given his full debut at right back. He was joined alongside Tyreece Robinson, Ben Turner and Mason Warren. In midfield were John McGrath and Jake Scott in the center with Curtis Burrows and Jimmy Phillips on the wings. Up front was the pair of Nathan Jarman and Isai Marselia.

Stamford had the first chance as a ball was fizzed across the face of goal where Sam Grouse was waiting but he could only find the side netting on the outside of the left hand post. Nathan Jarman who two efforts in two minutes next as he took the ball down well both times but one was over the bar and one was side of the left hand post with both being outside the area. After a lull ten minute period as both sides were gathering momentum Sports began to grow into the game as Marselia and Burrows has quick fire efforts before Jarman put Sports ahead with 24 minutes gone. Sports broke out from the back and after a good spell of play the ball was fed over the Nathan Jarman on the right hand side of the box. The former Gainsborough Trinity man drove into the box before striking a low and hard effort under the keeper and into the bottom left corner.

Moments after the restart Stamford hit the bar as they looked to draw level straight away. Then a Burrows cross was nearly stabbed in by the Stamford defense for an own goal but was caught by the keeper just in time. Harley Kozluk received a yellow card for a late tackle before a foul on Phillips went unnoticed by the referee which allowed Stamford to break with King having to pull off a fine save to his right hand side to keep the score at 1-0. McGrath hit the bar with a free kick and Stan Mughisa fired a rocket of a shot just past King’s left hand post.

In what was a frantic end to the first half where Stamford bombarded the Sports goal with efforts, they were made to pay for not taking them. First Marselia could have scored a few minutes before we did. His first effort went tricking over towards the line but the purposely longer grass in the 6 yard boxes made a difference as the ball lost pace and allowed Stamford to just clear away before Jarman could get there. However with the last kick of the half Marselia got his goal and Sports second of the night. A cross over from the left took a massive deflection as the ball fell into the path of the Dutchman who showed great composure to slide the ball into the bottom left corner.

The second half started with Phillips striking an effort over the bar after good play between Jarman and Marselia. Eliot Putman smashed a shot over the bar before King had to be on full alert to save a 1v1 effort with striker Liam Adams with the rebound from Sam Grouse being put wide. Sports made their first change as Jarman was replaced by Evan Garnett. Mason Warren was booked for halting a Stamford counter attack just before Garnett had his first chance forcing the defenders to block his effort for a corner. A 50/50 challenge between Kozluk and Stamford’s Armstrong left both on the floor requiring treatment but thankfully both were ok to carry on moments later.

Sports final change saw Jimmy Phillips come off for young Will Norcross. Jake Scott sent an effort over the bar but only a few minutes later Sports killed a hard game with the third of the night. A succession of corners ended with McGrath finding Marselia inside the box who took the ball down and smashed the ball into the right hand side of the net to score his second and Sports third.

That goal killed the rest of the game and the referee below straight on the 90th minute to end a very tough test for Sports who may not have played as well as the score line suggests but the target of progression into the next round was achieved and that’s all that matters in these competitions. Next its back to the FA Cup as Sports travel to Leicestershire to try and avoid a cup upset against United Counties League and Step 6 side Anstey Nomads on Saturday 22nd September, 3pm Kick Off.