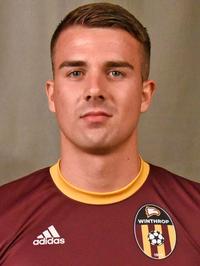 After a successful trial with the club, Mickleover FC have signed, subject to international clearance,  US College Soccer ace Jordan Walshaw.

Born in Sheffield, Jordan Walshaw started his football career as a Chesterfield youth player, before heading to US College soccer.

He was playing for Winthrop Eagles last season in the Big South Conference. A regular goal scorer from midfield and attack, he was previously playing with UNC Pembroke where he scored 17 goals in 31 games in 2015/16, but missed most of 2017 through injury.

I am delighted to be joining Mickleover FC. The staff and the players have been great since I’ve joined and the philosophy and team environment was what made the club somewhere I knew I would enjoy playing. I can’t wait to get started and help the team achieve success this season.

The fans first got a glimpse of Walshaw when he played the first half of the recent home friendly against Guiseley, the 6ft 1in burly striker, looking very much the old style centre forward.

I’m delighted to welcome Jordan to Mickleover FC. He’s someone who has really impressed us during our pre-season programme and we have fought off numerous clubs to get his signature. He’s a hard working centre forward with a good eye for goal and someone I’m looking forward to working with over the coming season.