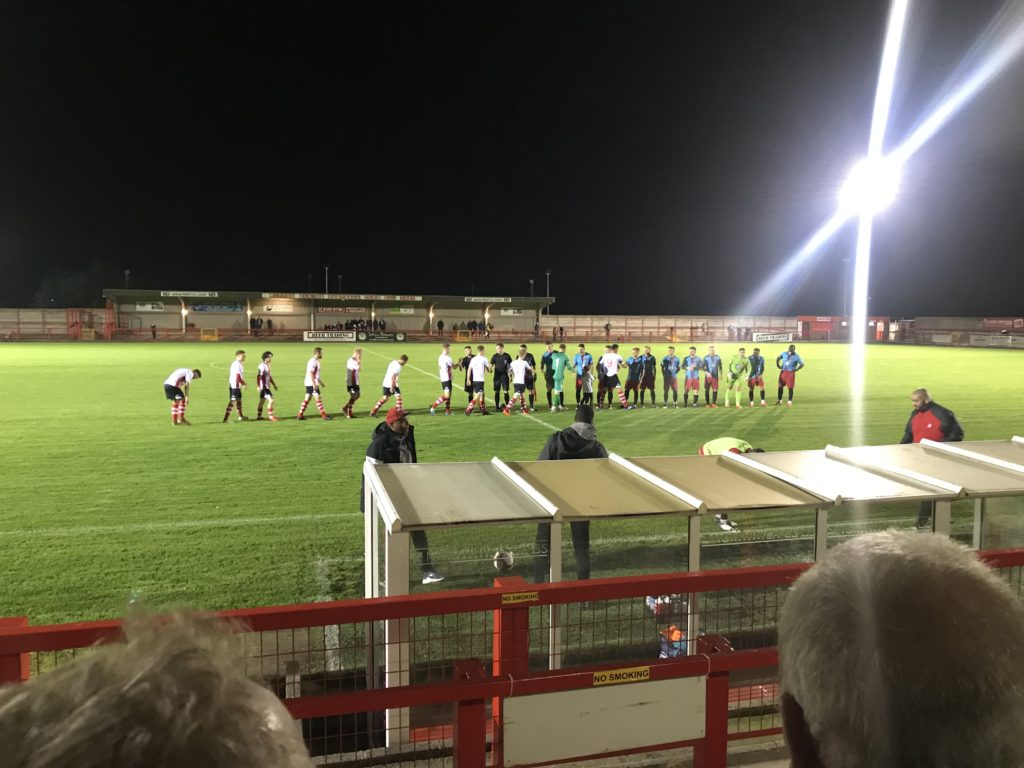 Mickleover Sports had a huge weight lifted off their shoulders as they got their first away win of the season on Tuesday night as they came out 2-1 victors on Tuesday night in Cheshire. Sports dominated the first half and goals from the gaffer John McGrath and striker Nathan Jarman were reward for a first half in which Sports could have been 3, 4 or even 5 goals to the good at half time. Witton were always going to come out the blocks fighting in the second half and they got a goal back through Rob Hopley in the 70th minute. But despite the increased pressure and six minutes of injury time Sports held firm to take three points back down the road to Derby for the first time in the league this season.

Lewis King started in goal with a back four of Jake Scott, Tom Burgin, Pablo Mills and Ben Turner. John McGrath and Ricky Ravenhill were in holding midfield roles with an attacking quartet of Evan Garnett, Oli Roberts, Jimmy Phillips and Nathan Jarman. On the bench were Harley Kozluk, Isai Marselia, Curtis Burrows and Mason Warren.

Sports got off to a flying start as they went ahead after six minutes. A free kick on the right hand side of the box was taken by McGrath and he spotted a gap in goal to place the ball into the near post which caught the keeper out and went in just under him into the bottom right hand corner. Within ten minutes Sports dominance saw them go two ahead. A lovely ball over the top found Garnett running through who inside the box played the ball back to Roberts, who in turn spotted the gap to place in Jarman in space to slam the ball home from close range to double Sports advantage.

Witton then reacted and his straight on the attack. Danny McKenna unleashed a wonderful curling effort which looked destined for the top right corner. However King managed to get a finger on the ball to tip it onto the bar and out for a corner. Next James Foley produced a powerful effort from the left hand side of the box but it went over King’s bar. A few minutes later Witton were nearly gifted a route back into the game. Jake Scott played the ball back into King who’s clearance was blocked by the Witton striker and almost went over the line but thankfully Pablo Mills got back just in time to clear it away for a corner. A big chance then fell for Sports as Roberts had an effort saved before Jarman had his rebounded strike cleared off the line via the defenders head. Garnett had two chances before the break to increase Sports lead further but sadly couldn’t take them with one saved and one blocked away to see Sports go into the break two goals up but certainly should have had more.

When the second half got underway Witton changed formation and made a substitution to try and get back into the game. They could have got a goal before they actually did as a free kick found its way into the Sports box and after a few headers the ball fell to Rob Hopley who managed to blaze a first time effort over the bar and out of the ground from only a few yards out. He made up for it later on though as he scored in the 70th minute to give the hosts the momentum for the final section of the game. A corner was taken short, crossed in and the header hit the bar but the ball dropped down into the path of Hopley who made no mistake heading the ball in from a yard out to give Witton hope of getting back into the game.

Sports made a change a few minutes later as Oli Roberts came off for Curtis Burrows to add some more speed down the right flank. Sports then had their final chance of the game as Garnett was played in on the counter attack and got just inside the box but his shot was saved by the Witton keeper. Sports then made their second change as Nathan Jarman came off to be replaced by Mason Warren to sure up the defence.

Despite the dominance in possession and many balls into the box Burgin and Mills were heading and clearing everything that came their way and despite the six minutes of added time that came and went Sports didn’t allow Witton Albion to create any real concrete chances in the final moments of the game. As the final whistle went the joy and relief of all connected with the club could be seen and heard as Sports won and got their first away win of the league season. Sports now have a huge weight off their shoulders and can hopefully now push on and move further up the table in the weeks ahead. Sports are next in action on Saturday 13th October back at The Don Amott Arena as they take on Nantwich Town on Non League Day with a 3pm Kick Off.