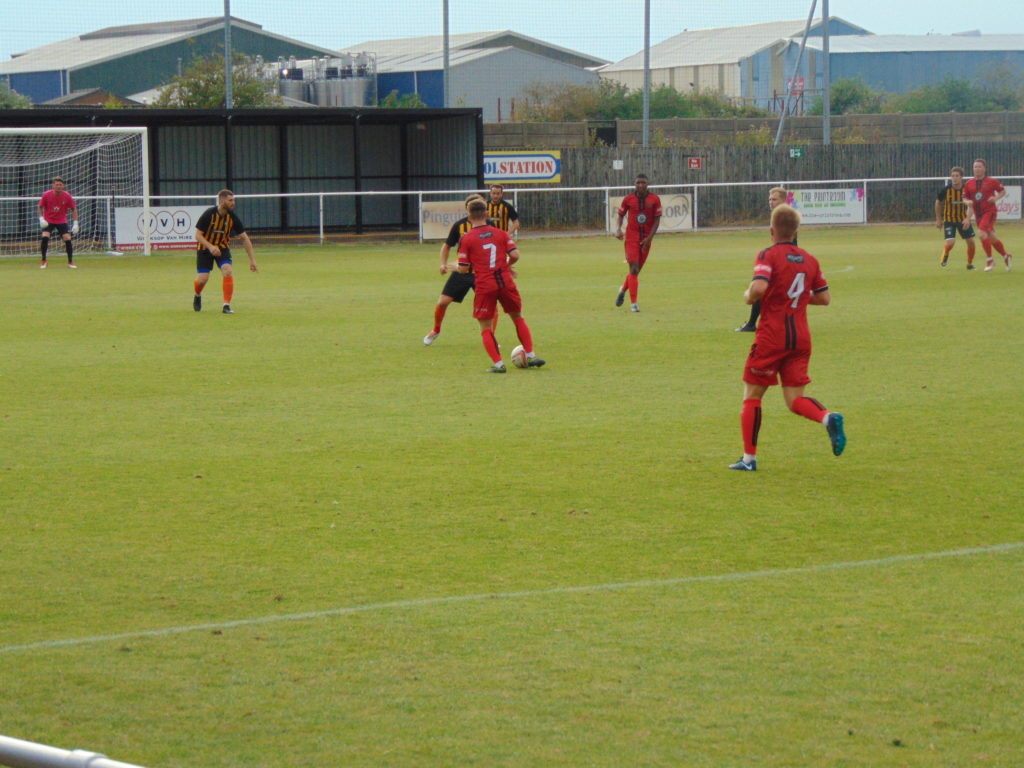 Mickleover Sports’ run of Pre Season victories came to an end on Friday night as they drew 0-0 with Worksop Town. The Tigers definitely were a strong test for John McGraths men, arguably more so than the last time they visited the ground against Handsworth the week before. But as we all know pre-season results count for nothing once the season gets going and there was lots of positives to take from the game with key match fitness gained as we count down to the first game at Stalybridge Celtic.

With John McGrath absent for family commitments it was the returning Steve Taylor who took charge of this latest Sports friendly, with the injured Pablo Mills and Clinton Morrison providing the back up. Two Trialists were named in goal and at right back alongside Tyreece Robinson, Tom Burgin and Ben Turner. In midfield Jake Scott started alongside Curtis Burrows, Niall Doran and the Trialist from the Netherlands. Up front was the usual partnership of Evan Garnett and Nathan Jarman.

Sports definitely started the brighter of the two sides as Evan Garnett and Nathan Jarman both had efforts saved by the Worksop goalkeeper in the early stages of the match. Next Ben Turner and Curtis Burrows linked up well down the left hand side with the former curling a lovely effort into the box which nobody could get a touch onto it and saw the ball run away for a goal kick.

Worksop then had their first real chance as Matt Templeton had a shot after a break away from the Tigers but he placed the shot high and wide over the Sports goal. Then Sports hit back as the Trialist at right back, who was having his first run out for Sports in this game, managed to cut inside on the right hand side and strike an effort which came off the post and away from danger. Ben Turner fired one over the bar before Tom Burgin then had a strike a minute later from the half way line which almost caught the Worksop keeper out and had him worried but luckily for him the ball flew just narrowly wide of the net. The Dutch Trialist, who had scored last week on this ground against Parramore, showed some great skill to cut inside past the Worksop defence and drill an effort just wide of the left hand post. But it was the hosts who could have had a half time lead as they clipped the post after a strike from distance but it thankfully went out for a goal kick. This turned out to be the last action of an entertaining first half period.

Two changes were made for Sports at the break from Mickleover as Curtis Burrows and the Trialist keeper made way for new signing Oliver Roberts and normal No.1 Lewis King respectively. Straight away in the second half King was called into action as Worksop were awarded a penalty kick for what looked like a very soft hand ball given by the referee. It was Worksop forward Mark Simpson who stepped up to take the kick. The effort was very well saved by the diving Lewis King who guessed correctly and went to his right hand side to palm the effort away with the rebound going over the goal. A real let off the Mickleover Sports so early into the second half. Both sides exchanged efforts next with Tyreece Robinson having Sports effort hit the bar, before the Dutch Trialist was taken off in place of Will Norcross. Then both full back were substituted for Sports as Trialist and Ben Turner made way for Harvey Kozluk and Jack Walsh respectively.

The next Sports chance came on 77 minutes as a fantastic ball over the field from Oli Roberts found Kozluk on the right hand side who drove a great cross over in the direction of striker Jarman but the Worksop keeper managed to grab the ball before Jarman could and clear the danger. The final Sports change saw Tyreece Robinson rested after an impressive performance and on came another Trialist for the last ten minutes of proceedings.

The final then minutes were dominated by wave after wave of Sports pressure as two Will Norcross efforts were deflected and saved by the keeper, the latter of which went out for a corner. As the game entered the final few minutes a Jarman left footed effort was blocked well the Tigers defence which took the sting out of it as it nestled into the keeper’s arms. The final chance to grab a late winner came and went in the last minute of play as Sports were pressing and another Norcross effort was saved down low by the keeper, who had been having a great performance all game and deserved his clean sheet for his efforts. But so did Sports as the game came to a close. Baring the penalty scare a good defensive performance to add another clean sheet with plenty to work on up front but with plenty of optimism and hope with more friendlies to come as the season draws ever closer. Next are two games in two days as we travel to local friends Mickleover RBL on Tuesday 31st July. Then former Sports player Dan Martins Heanor Town provide the opposition at the Town Ground on Wednesday 1st August, both games with 7:30pm Kick Offs.