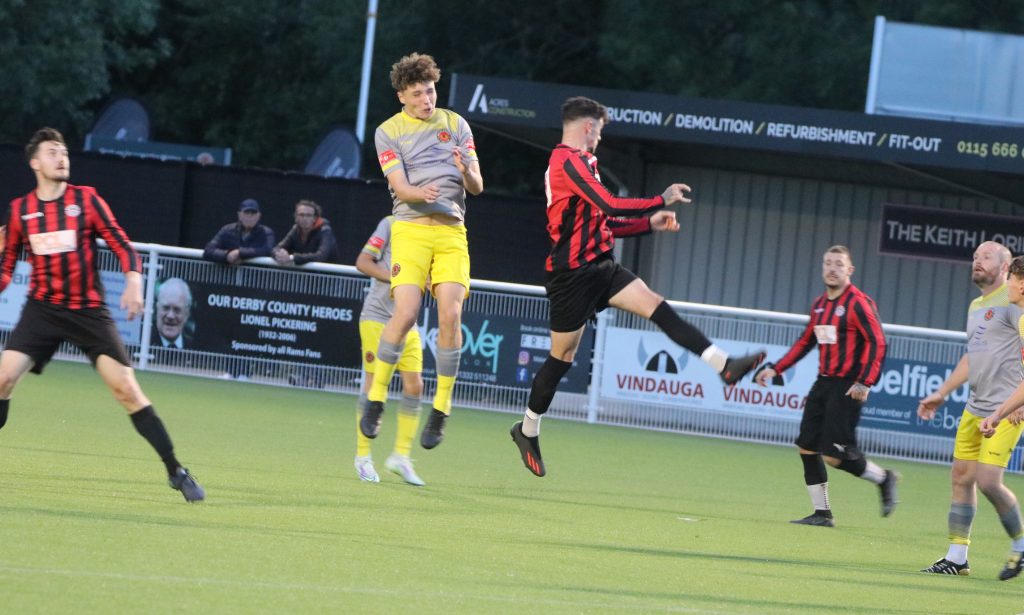 Mickleover Reserves secured their second win of the season last night, hitting six without reply at home to Ashland.

In his first game since last November, Bennett was back from his knee operation and soon on the attack, with a right cross in the first minute to earn a corner.

Having moved from his previous right back position, Leighton chased a through ball after six minutes, but it just outpaced him and went out for a goal kick.

Sports were looking very strong going forward and a cross from Mills just missed Davidson-Miller’s head, before a slight fumble from the Ashland keeper was cleared.

McGrath and Horleston were controlling midfield, freeing up Parr and Leighton for runs at the visitors. 10 minutes in and McGrath fed Bennett down the right again, but his cross the saw Davidson-Miller’s shot blocked. Parr then fired in another cross three minutes later to earn another corner.

Mills put a shot wide after 14 minutes from a McGrath cross and a minute later a free kick from the Gaffer saw Davidson-Miller hold the ball well in the box, but he couldn’t get the turn for a final shot before it was cleared.

The shots were coming thick and fast and Horleston found Davidson-Miller again in space, but his shot was just wide of the left-hand post after 16 minutes.

Three minutes later and Davidson-Miller finally hit the opening goal, after a long and precise build-up from midfield 1-0, and only a minute later Mills crashed a shot against the bar after a great diagonal run from Leighton.

Davidson-Miller was constantly on the attack and his long run after 22 minutes earned another corner, he then cracked in another shot a minute later which was well saved by the Ashland keeper.

McGrath then had a corner, which led to a deflected shot hitting the post, and then in close succession both Horleston and Mills had further shots saved.

On the half hour another McGrath corner saw the visitor’s keeper save again from Davidson-Miller before Bennett made it 2-0 after a build-up down the right in the 33rd minute. 2-0.

Mills then hit the bar again from a McGrath pass, before both Davidson-Miller and Mills had further shots saved as half time approached.

With a minute to go Ferron beat the defence on the left, found Mills but the keeper saved his shot again Then Leighton just missed making contact as the Ashland keeper ran off his line to intercept, with Mills waiting unmarked in the middle.

There was no peace for the visitors again as Mickleover were straight on the attack again at the start of the second half.

A Ferron cross just missed Davidson-Miller’s head after 46 minutes, but three minutes later the visitors had their only real shot in the whole match, well wide of Bowen’s left-hand post.

Ferron had a shot himself which the keeper held onto at the second attempt and then after 55 minutes Bennett was causing more trouble down the right, but the following shots were off target.

We only had to wait another minute though before Davidson-Miller connected in a goal mouth scramble to make it 3-0.

Ashland had a break almost on the hour, but with Bowen racing off his line, the danger was soon cleared before Mickleover made a double substitution with Pennington and Ryder on for Bennett and Leighton.

Davidson-Miller then completed his hattrick after 68 minutes after taking the ball around the keeper, he then came off to be replaced by Ironmonger, with Atwal on for Parr. 4-0.

Mills was still seeking his goal and fired another attempt wide after 73 minutes. Ferron then fed another ball to him, but he just missed connecting, but there was another goal after 77 minutes with Ironmonger on target 5-0.

Brown came on for Horleston in the last 10 minutes and after a solid performance at the back from Rock and Sandhu, Rock went close to adding to the scoresheet after 82 minutes, after his effort was just wide of the left-hand post.

88 Minutes on the clock and Mills got his goal to round off the night with a comfortable 6-0 victory. “I wasn’t a matter of if I scored, it was more a case of when,” Mills concluded.

The Reserves are next in action next Tuesday night, when they visit Arnold Town.